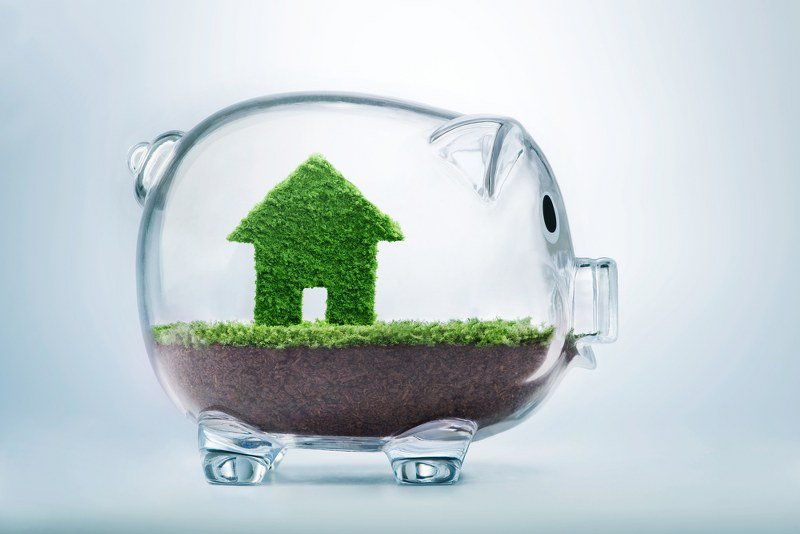 If you buy a house under the ‘Pradhan Mantri Awas Yojana’ scheme, and also avail tax benefits under the provisions of Budget 2017, your total savings could be over Rs 2.40 lakhs on a home loan taken for a tenure of 20 years

If you buy a house, the central government will lend support with over Rs 2.40 lakhs up-front. The Union government has given a range of subsidies on interest payment to home loan borrowers, with a household income of up to Rs 18 lakhs. The subsidy amount will be paid to the housing finance companies upfront. This policy has a dual purpose one, drive up the sale of houses to push the sector and, two, achieve the ambitious programme, ‘Housing for all by 2022’.

At present, subsidy is given to low income households, with a total annual income of Rs 6 lakhs per annum. The new scheme’s outline was announced by the prime minister on December 31 in his address to the nation, whose details have been finalised only now and are likely to be notified soon. The programme will be covered under ‘Pradhan Mantri Awas Yojana’ (PMAY).

government source said that though the scheme is to be notified now, the benefits under the scheme were already launched from January 1, 2017, itself. Thus, all those who bought houses on and after January 1, 2017, are entitled to the benefit. Apart from this, all the schemes of subsidy will now be available on a 20year home loan, including the one for low income group, which was earlier a 15-year home loan only.

Owing to the subsidies from the government, the effective EMI will be reduced by Rs 2,117, if the repayment period is 20 years.This subsidy will not be given every month to the lender. Instead, the government will pay around Rs 2,43,894 to the lender upfront, so that the EMI at the contracted rate falls by this amount.

The interest subsidy at the rate of four percent for a 20-year loan of Rs 9 lakhs results in a reduction of EMI by Rs 2,117, when the home loan is taken at 8.50 percent. According to the scheme, there is no restriction on the loan amount that a homebuyer with an annual household income of Rs 12 lakhs can avail, except that the four percent subsidy is available on Rs 9 lakhs alone.

But if the borrower’ s in come is more than Rs 12 lakhs per annum but up to Rs 18 lakhs, he can get three percent subsidy on only an amount of up to Rs 12 lakhs, from his total home loan. In this also, there is no cap on loan amount or the value of the property that such a person can buy. However, the maximum benefit in this leads to a reduction in EMI by Rs 2,159, if borrowed at 8.50 percent, which is equivalent to a reduction in the bor-rowed capital by Rs 2,48,810.

For a low income group household earning up to Rs 6 lakhs per annum, the interest subsidy is 6.50 percent on an amount of up to Rs 6 lakhs from the total loan amount, which reduces the EMI by Rs 2,172, if the loan is borrowed at 8.50 percent. This is equivalent to a reduction in the borrowed amount by Rs 2,50,240.

If a person is buying the first house at a capital value of less than Rs 50 lakhs by taking a loan of Rs 35 lakhs or lesser, the benefit will increase substantially.In this case, a person having a household income in the 30 percent marginal tax bracket can get a maximum annual tax benefit of Rs 77,250, while those whose income is in the 20 percent tax bracket will be able to save up to Rs 51,500 annually. In this case, too, a deduction of Rs 2.50 lakhs is allowed.

National Housing Bank (NHB) and HUDCO are the nodal agencies to implement the schemes. At present, the scheme for the low income group is being rolled out. Till Decem-ber 31, 2016, the government has given subsidy to around 18,000 housing units with the total subsidy disbursal amounting to around Rs 310 crores.

A senior NHB official said following the revision of the scheme to include middle income group households, the disbursal rate is likely to pick up. 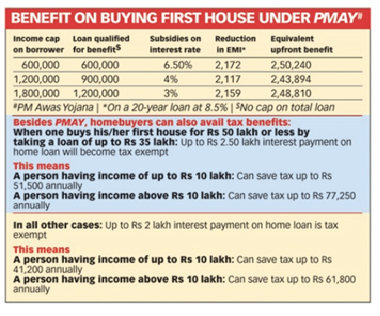