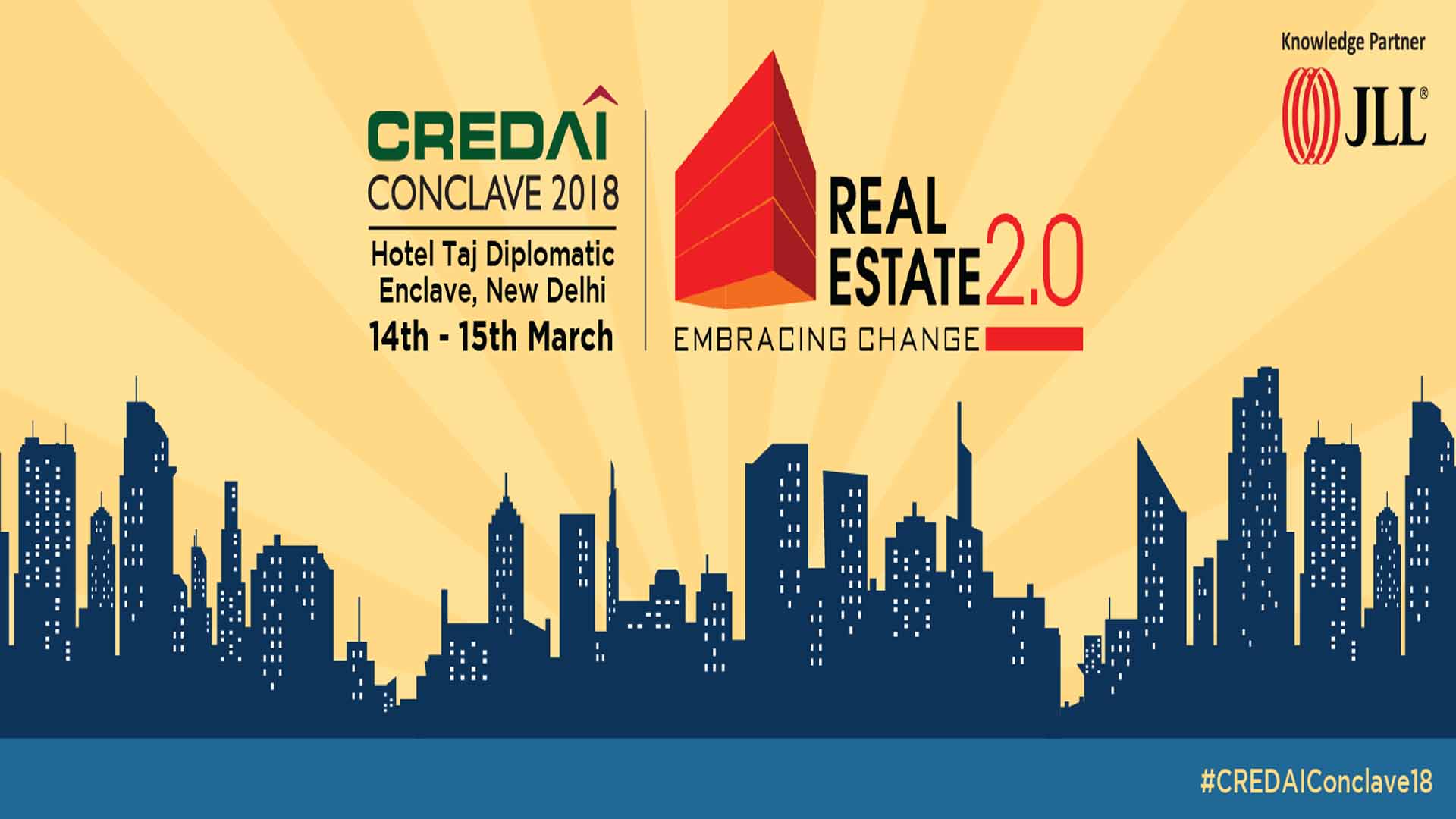 Established in 1999, the Confederation of Real Estate Developers’ Associations of India (CREDAI) is the preferred platform for National discourse on Housing and Habitat. With a strength of more than 11,940 members, CREDAI today spreads across 23 state and 189 city chapters.

A voluntary code of conduct presides over the all of the proactive members of CREDAI to bring out ethical practices and self-governance to maintain integrity & transparency in the realty sector.

The three flagship annual events of CREDAI are Conclave, Natcon and New India Summit.  CREDAI Conclave is an annual national conference, which aims to bring together 1000+ developer members that are the giants of the realty sector, in order to help the industry stakeholders to understand and work out a brighter future for the real estate sector. 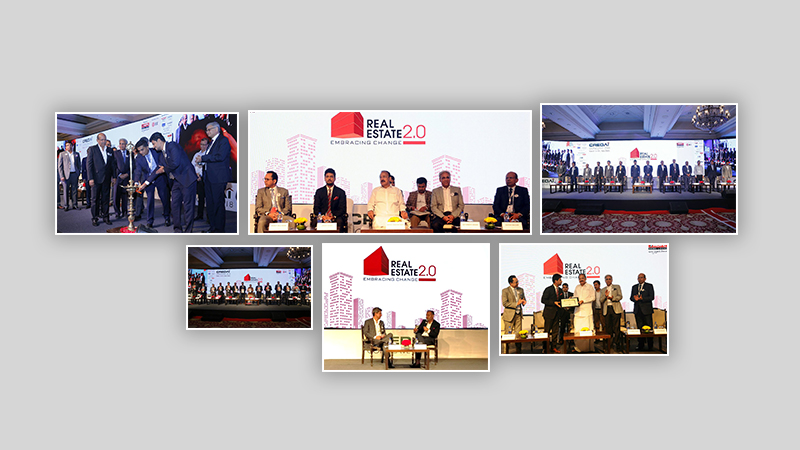 The Conclave for the year 2018 brings a new theme of- Real Estate 2.0: Embracing Change. This evident theme underlines the belief of CREDAI that with change, also arrives with an equal chance of growth and sustainable development in the Country. For an unprecedented growth, the never before regulations have been enforced, according to the CREDAI, the RERA, Demonetization and the tax regime of GST together present an opportunity to rewrite rules of the game for their businesses. 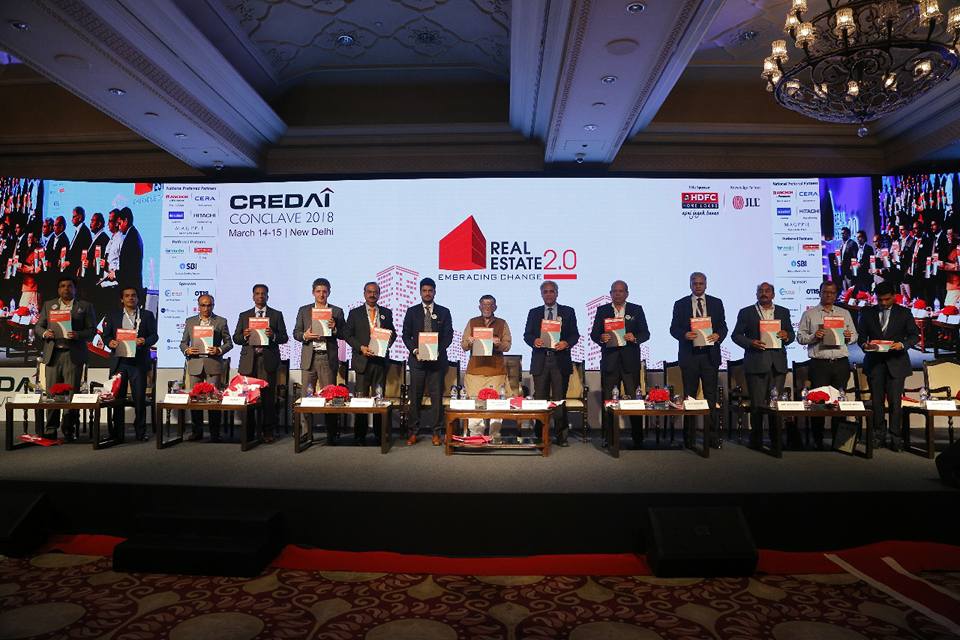 The two day Conclave event initiated from 14th March to 15th of March 2018. The event initiated with the executive committee-governing council, a meeting of the highest decision making body of CREDAI presided by The Chairman, President, President Elect, Vice President, other office bearers, the Presidents of 23 CREDAI state chapters and the Chairmen of committees.

Following the inaugural session by the dignitaries was the lamp lighting ceremony, initiating the felicitation of the chief guest and the guest of honour. Next in his addressing, Getamber Anand- Chaiman CREDAI said, “In the next two days, we will be deliberate on how to restructure our organization and how to build our army. We will learn together, walk together and win together”. 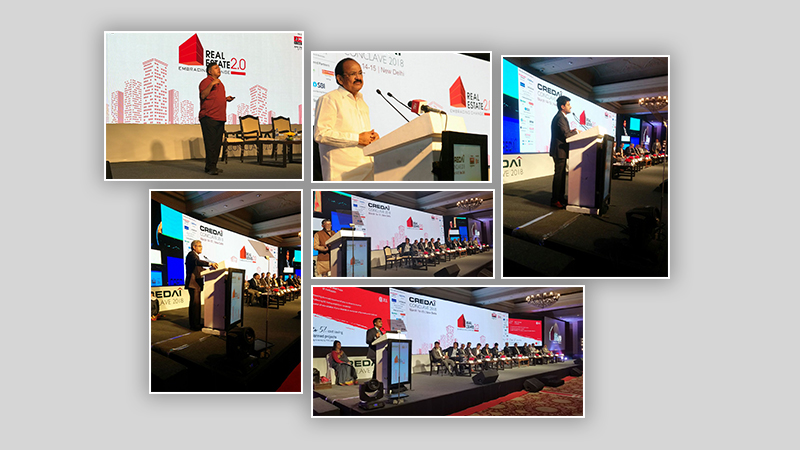 The audio-visual representation after the addressing depicted the CREDAI’s role in promoting Skilling, CCCM, and Affordable Housing & Education. The major addressing by the Guest of Honour Shri Santosh Gangwar, Hon’ble Minister of Labour and Employment was scheduled at 3 pm on first day. He said, “We thank CREDAI for raising concerns that are negatively impacting the real estate sector. The parliament promises to work together with the developers to resolve these issues and work towards building a new India”. It was followed by the Chief Guest Address, Shri Hardeep Singh Puri, Hon’ble Minister of Housing and Urban Affairs.

The second day of the Conclave started off with the welcome address and felicitation of Chief Guest by Mr. Jaxay Shah. It was followed by the keynote address by Shri M. Venkaiah Naidu, Hon’ble Vice President of India. In which he emphasised on the importance of the discipline in public life. According to him, after the slowdown, the market has started to show the signs of revival. He expresses hopes in the implementation of the rigorous regulations like RERA and GST, as they were aimed to strengthen the market by introducing transparency and confidence among the consumers. The GST rate has been lowered from 12 percent to 8 percent in the affordable housing segment. 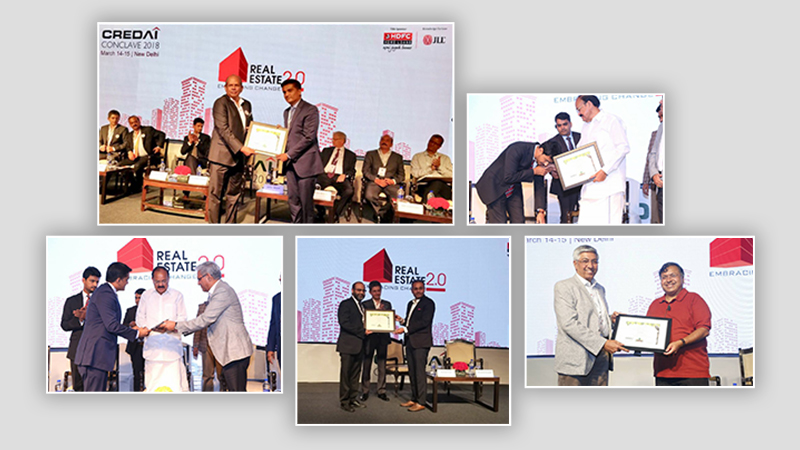 Next was the session by the Motivational Speaker, Shri Devdutt Pattanaik. He said, “Knowledge in India has always been transferred through stories, and every story is a vessel. It has a central idea which can be applied in business and day to day life”.

Next was the keynote session by Ramesh Nair, CEO & Country Head, JLL India on professionalizing Indian real estate. According to him, “Integrity over image, character over charisma is how we need to build brands and become solution providers and not just product providers. Affordable housing will lead to a lot more collaborations between small and large developers”. The announcement and presentation of social media awards by the president of CREDAI followed this session.

To make the industry more organized and progressive, the CREDAI has worked hard with government representatives, investors, finance companies, policy makers, consumers and real estate professionals. Proposing to bring out the best practices taken up by the states and provide the relevant international knowledge on these matters to the public and the government, CREDAI is in constant efforts to enhance the efficiency and the economy of the country.