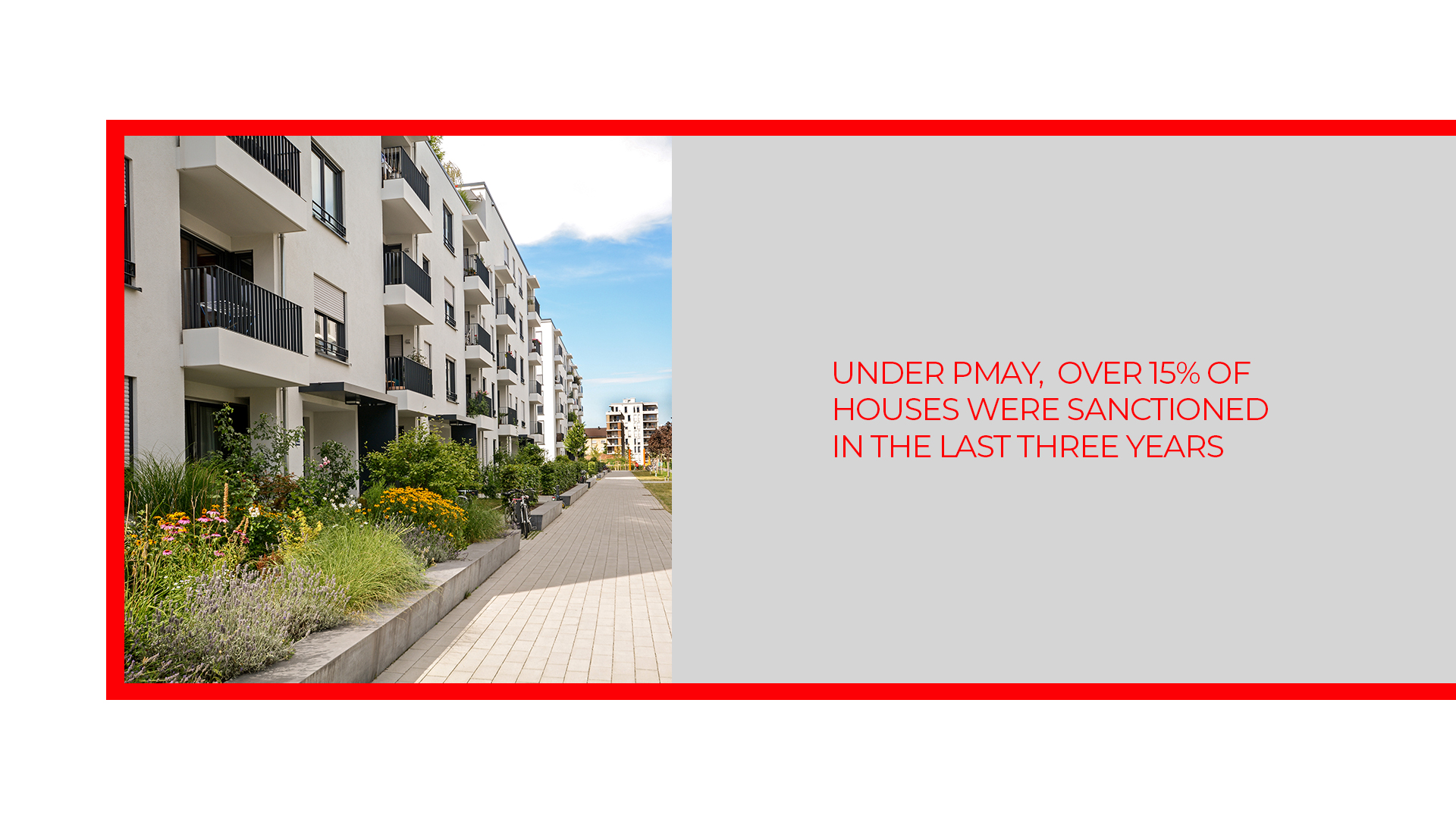 The ministry approved the construction of 1.12 lakh more affordable homes for the urban poor.

As per data provided by the Housing and Urban Affairs Ministry, over 15% of the 54.95 lakh houses sanctioned within last three years under the Central government’s Pradhan Mantri Awas Yojana (Urban) have been completed. The government has set a target of constructing one crore houses in urban areas across the country during the period of 2015 to 2022.

The ministry also approved the construction of 1.12 lakh affordable houses for the urban poor last month, this has taken the number of houses funded under the PMAY Urban Scheme to 54,95,443.

According to official figures, 8.55 lakh houses have been completed till 21st August since the launch of PMAY (Urban) Scheme. Also, work for 30.4 lakh units across the country is in progress.

A senior official from the Housing and Urban Affairs Ministry stated that construction is in full-swing with the exploration of new technologies to ensure completion in less time. He also stated that out of 8.55 lakh, 5.68 lakh houses have been completed in the last one year.

The Ministry has also constituted a Central Sanctioning and Monitoring Committee (CSMC) under the chairmanship for Housing and Urban Affairs (HUA) Secretary for complete monitoring of the scheme. A total of 4,320 cities and towns have been included in the PMAY (Urban) across the country. A total of 11,226 projects have been approved till July this year.

The Housing and Urban Affairs Ministry has planned to organize Global Housing Construction Technology Challenge to attract innovate construction technologies that are adaptable and low cost.

The PMAY (Urban) was launched by Prime Minister Narendra Modi in 2015 that aims to provide “Housing for all by 2022” via financial assistance to the beneficiary. According to the scheme, the applicant should not own a pucca house in their name anywhere in the country. The Scheme has four major components including Credit Linked Subsidy Scheme‘ (CLSS), In Situ Slum Redevelopment (ISSR), Affordable Housing in Partnership (AHP) and Beneficiary Led Construction (BLC) under which ministry will offer central assistance to beneficiaries to construct their own houses.

The scope of CLSS, for EWS and LIG’s was extended to the MIG (Middle Income Group). The scheme was approved initially for one year and has been extended up to 31st March 2019. Under CLSS, the central government will offer interest subsidy up to Rs 2.67 lakh on home loans to individuals that will decrease the principal outstanding amount of the loan. The beneficiaries eligible for interest subsidy under the CLSS scheme have to apply to their lenders for availing the subsidy benefit.

On the CLSS under PMAY (U), Noida Extension Flat Owner’s Welfare Association (NEFOWA) stated that the central government would need to make the people aware about the eligibility for the scheme.

Indreesh Gupta, NEFOMA said, “There are certain conditions of the PMAY (U). Every builder attracts buyers through CLSS. But when the applicant applies for the subsidy, his or her application is rejected”.

It has divided the MIG (Middle Income Group) into two categories that cover annual household income between Rs 6 lakh to Rs 12 lakh. The second category covers Rs 12 to 18 lakh. The loan borrower can choose lower EMI’s or pay loans faster with original EMI.

Under the ISSR, slum redevelopment grant of Rs 1 lakh per house is admissible for all houses built for eligible slum dwellers under this component using land as a resource with the participation of private developers.

Under BLC to individual eligible families belonging to EWS categories while central assistance of Rs 1.5 lakh per EWS house is also provided under AHP for projects where at least 35% of the houses are for EWS category and a single project has at least 250 houses.

Bizay Sonkar Shastri, BJP spokesperson said that PMAY (Urban) is a beneficial scheme for the people and is on the right path. The government and officers were working to complete the target set under PMAY.

The total estimated investment under the PMAY (Urban) is Rs 2,96,919 crore. The ministry said that it has approved central funding of Rs 82,040 crore till last month.