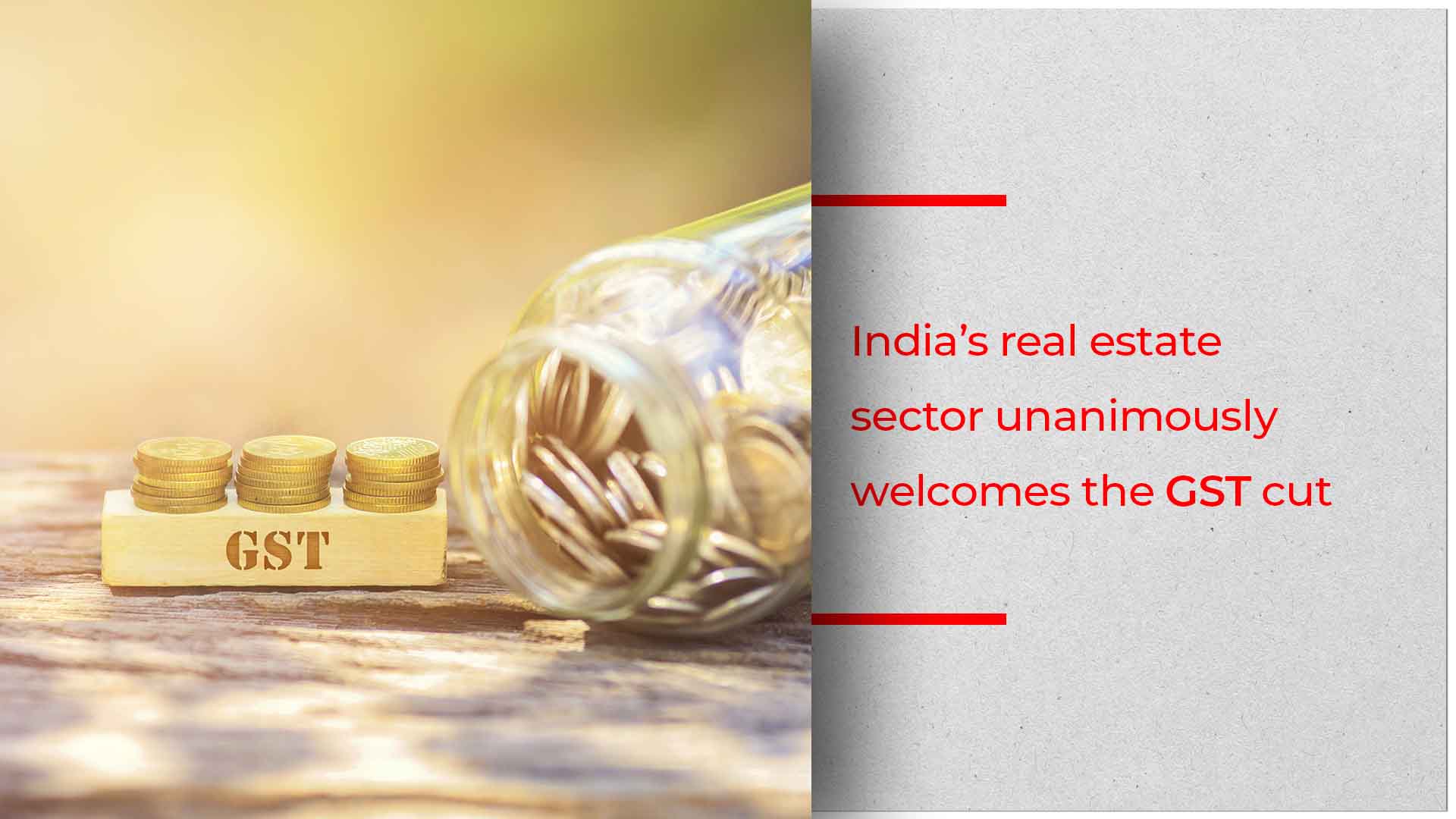 The real estate industry has reacted very positively to the GST Council’s decision. In a meeting on Sunday it was decided to cut down the Goods and Services Tax (GST) from 12 percent to 5 percent on under-construction homes and from 8 percent to 1 percent on affordable homes. Both have been lowered without input tax credit (ITC).

Dr Niranjan Hiranandani, MD of Hiranandani Group and National President of NAREDCO (National Real Estate Development Council) said, “It is a welcome and positive move which brings a big relief to the homebuyers and helps narrow down the demand mismatch gap. This announcement gives an impetus to the affordable housing and enthuse homebuyers to close the sale deals. The GST rate on cement has not been reduced as was expected, at 28 percent it remains among the highest taxed inputs for construction. There will be no ITC so developers will face a challenging time. Also, if the announcement was ‘with immediate effect’, we would have seen sales of residential real estate units in the current financial year; the w.e.f. 01 April aspect means we will see rise in sales figures only in the next financial year.”

Rajan Bandelkar, President, NAREDCO West said, “We at NAREDCO are delighted and grateful to the government of India, the finance ministry and housing ministry on behalf of the real estate fraternity. The revision of GST rate to 5 percent for housing and 1 percent on affordable housing is the much needed move at the industrial as well as the buyers’ front. It will breathe life into sector by attracting sales. Amid the impetus of ‘housing for all’ by 2022 and evolving towards a trillion dollar economy by 2030, this is indeed a big step at par with the goal of central government to scale up on the rankings of EODB (ease of doing business) in 2019. It will enhance the prestige of Indian real estate industry at a global level in the days to come.”

Ashok Mohanani, Chairman EKTA World and Vice-President, NAREDCO West said, “The expected cut-down in GST rates for under-construction projects to 1 percent and 5 percent will be a great push for the sector. It will been seen as a yet another revolutionary decision by the government and bring in a wave of relief to the buyers. Homebuyers can once again opt to invest in properties if there is a reduction in the tax rates.  Moreover, it will assist developers in clearing off their unsold stock. And on the other end, the decision to charge an additional 1 percent stamp duty surcharge on value of property may act as a mild dampener to roaring spirits.”

Manju Yagnik, Vice Chairperson Nahar Group and Vice President NAREDCO (Maharashtra) said, “To ensure the benefit reaches low-income buyers, the council has rightly considered 1 percent GST on affordable housing. Flats in the higher unaffordable category are going to get more accessible due to the 5 percent tax levy on them.”

Manju added, “However, not extending the benefit of ITC to developers might increase price of apartments for low and middle-income groups in most cities. The pressure will be more on the affordable housing segment, which enjoys a lower output tax rate of 8 percent and the benefit of ITC. Even though it will help in lowering down the cost of high value apartments in cities like Mumbai and Delhi, it could create a dent for the Centre’s housing for all policy as the overall cost for the buyer might increase despite of cut downs in some sections.”

Rohit Poddar, MD of Poddar Housing and Development Ltd said, “This reduction in the GST rate shows the pro-activeness of the government on addressing the issues the real estate sector is going through since past few months. The new twin definition for the affordable houses have given a better clarity to the developers under this segment although absence of input tax credit will probably result in increased prices for the customers. The GST rationalisation for under-construction properties is a comprehensive move which will help the developers in liquidating their unsold inventories which will be an added boost for the sector and the consumers as well.”

Amit B. Wadhwani, Co-Founder, Sai estate Consultants Chembur Pvt Ltd (SECCPL) said, “The revised GST rates will be an added boost for home buyer sentiments across the sector especially in concurrence with the recent budget announcement and alteration in the RBI repo rate. Rationalising the GST for affordable houses is a levelheaded move by the council, this will further enhance the purchasing power of buyers in alignment and will help to achieve the ‘housing for all’ mission. While this move will aid the lower income groups and the economically weaker sections of the society, we are yet to understand just how much will the realty sector or the builder community will benefit from this as the revised rates come with no ITC.”

Amit added, “We are still expecting some revision on GST rates for cement. However, in the light of yet another decision that could be a fillip to the real estate sector, moving ahead, the government must ensure they work towards making potential land parcels and due permissions available.”

ALSO READ: GST Council Decides To Cut Down GST To 1% And 5% For Homes