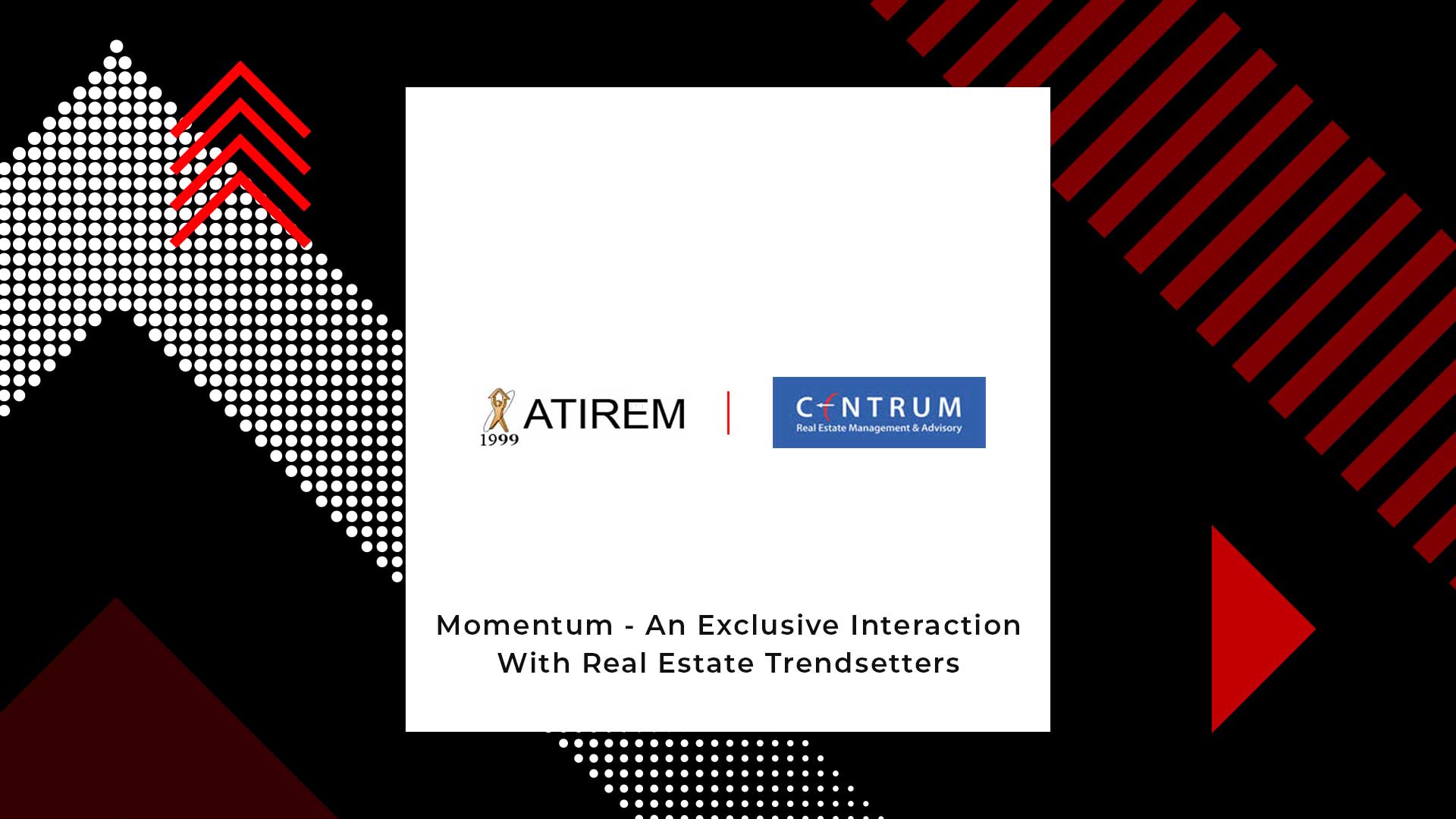 Centrum REMA and ATIREM – Accommodation Times Institute of Real Estate Management organized ‘Momentum’, an event that gave a platform to developers, channel partners and other institutions to comprehend the developments and challenges of real estate

Momentum was held at Centrum House, Mumbai on 27th March 2019. It was an exclusive interaction with real estate trendsetters. Ajay Chaturvedi, CEO of Accommodation Times, presided over the event. Arvind Nandan, Executive Director Research of Knight Frank, Amarpal Singh Anand, Vice President – B.D. Sales and Marketing of DOTOM Ventures, Uday S. Mathur (National Director Corporate Business Development) from Knight Frank and Harish Sharma, CEO of Centrum REMA were the esteemed members present at this event. Ajay Chaturvedi, while addressing the audience, explained the moto behind organizing such an event and shared how such events can play a major role in solving the many challenges faced by the real estate industry.

Arvind spoke on how the real estate industry has been evolving since the year 2000. Harish Sharma shed light on how the developers need to adapt to changes in the industry for constant success. All these were shared with 30 channel partners who had also attended the event.

Arvind Nandan elaborated on the major milestones in the real estate sector. From FDI investments in the sector to the recent REIT promoted by Embassy Group and Blackstone, Nandan made it a point to include each and every development in his presentation. Coming to private equity (PE) investments in real estate, he explained how the investments in commercial real estate gradually increased from 24 percent in 2011 to 60 percent in 2018. One entire section of the presentation was dedicated to developments in the industry in the year 2018. 2018 was a crucial year for the industry as the sales increased for the first time since 2011. Affordable housing and government reforms were largely responsible for the growth in sales.

While Arvind Nandan spoke on the developments in the industry, Harish Sharma gave key insights on the changes and evolution of buying behavior. He pointed out that in the early 1990s till 2000, people bought homes during retirement. However, in the last 15 years, people have started buying homes at an early stage. 5 years ago, people would pay in advance and wait for possession. Now, people move into their new house and start paying in installments. Harish also pointed out that other industries apart from real estate have adapted to similar changes.

Further, he observed that the sales strategy has changed from a pull strategy to push strategy. Earlier, the price was the only factor considered while buying homes. However, today’s homebuyer is concerned about everything like the total carpet area, approvals received from authorities, payments plan, quality of construction, sales experience, delivery schedule among others before arriving at a decision.

While prices remained weak in the previous year, affordability increased across cities in India. Most cities were reported to be below the Knight Frank Affordability benchmark of 4.5. Anand gave a glimpse of DOTOM Ventures’ future plans and shared insights about their current projects.

In conclusion, due to the major changes brought about by the government in the form of RERA and GST, the consumer sentiments have started to shift towards the positive side. However, there is still time for a complete turnaround of sentiments towards the sector.

ALSO READ: We Want To Be Seen As The Partner Of Choice For Large Developers – Centrum REMA