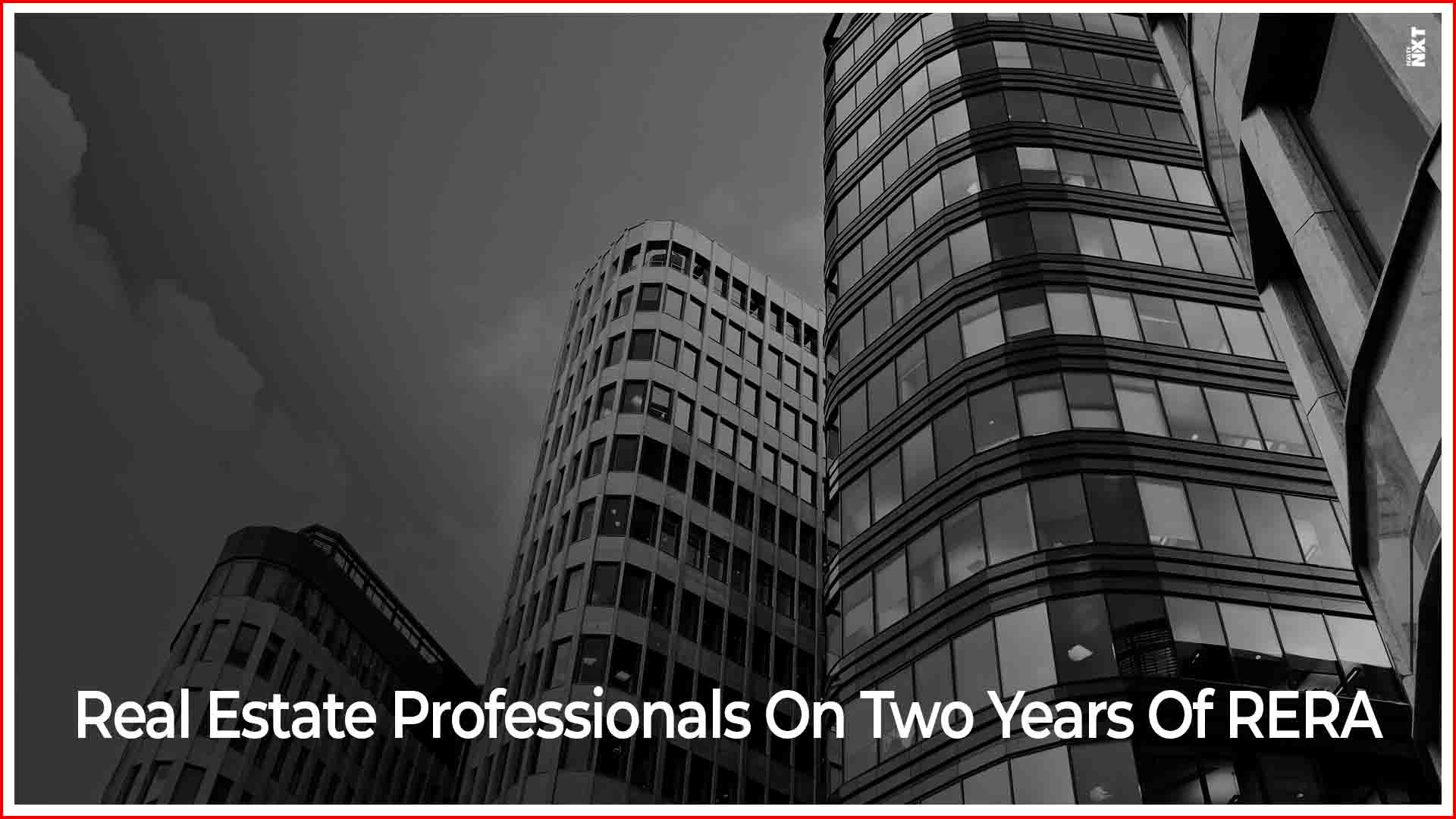 Two years since RERA, we try to understand what real estate developers and experts think of the transformation in the sector owing to strict regulations and rigorous actions

Penalty imposed, registrations cancelled and property auctioned – RERA has been reinforcing stringent regulations since it was deployed two years back. Real estate professionals, largely, are of the opinion that RERA has been successful in achieving the goals for which it was formed. At the same time, there is also scope for improvement.  When asked about how far RERA has been successful in bringing transparency to the sector and what changes did the industry witness, real estate developers and experts said that the future of the industry looks promising.

Rajan Badelkar, President, NAREDCO Maharashtra said, “2 years of RERA has given acceptance and Maharashtra has out beaten as no. 1 and has successfully completed 1-year conciliation forum that is very much active. Disposal of disputes is also very fast and consumers are very happy as they resolve their disputes and differences with the developers within the stipulated time of 60 days or 90 days. Real estate, being the major employment generating industry as well as many industries dependent on it, will have a better time in future as the confidence between the buyers and developers is improving day by day. As far as MahaRERA is concerned, the credit goes to Chairman Gautam Chatterjee and other authorities where everything is online when it comes to registration, complaints, compliance and conciliation processes.”

Ashok Mohanani, Chairman, EKTA World, Vice President, NAREDCO Maharashtra said, “Maharashtra has taken the pilot role in obtaining the developers to register under the Real Estate Regulation Act (RERA) with the Maharashtra Real Estate Regulatory Authority (MahaRERA). The intention of RERA has majorly been to provide additional protection to consumers, safeguarding their interests, ensuring that the delivery of the ongoing construction is a relatively seamless process. While the last year was expected to bring a host of fence-sitters into the market owing to an improvement in trust, sales have been relatively tepid as buyers are only gradually entering the market. In the long run, it is anticipated that the act will bring a positive paradigm shift in the perception of the home buyer. Like any new regime, the first two years were filled with uncertainty. For an industry such as real estate that has been traditionally unorganized and fragmented, this sort of transformation becomes even more overwhelming. One should also applaud the efforts of the real estate companies who have stood strong to the challenge and the regulators who have been instrumental in ensuring that the Act is carefully implemented.”

He also added that MahaRERA has guaranteed developers and home buyers to further lessen registration and dispute-redressal time to accelerate the processes. MahaRERA completes 2 years and we expect that these measures will in the long-term work to create a stable, more mature and organized industry, where the trust deficit between the developer, the investor and the customer will significantly improve. It has become the face of fair practices for real estate fraternity,” he concluded.

Rohit Poddar, Joint Secretary, NAREDCO West and Managing Director, Poddar Housing and Development Ltd said that RERA has been successful in building trust. According to him, MahaRERA is the best RERA in India.  He said, “RERA has been a huge success in Maharashtra, the trust gap between the developer and the seller has largely been bridged. RERA has been very quick to address the issues of the developers and giving judgments on the conflicts between the buyers and developers. Reconciliation process through arbitration cell has become faster and convenient for the customers in case of delay in possession, which has consolidated the confidence of the buyers in the market.”

JC Sharma, Vice Chairman and Managing Director, SOBHA Limited said that the implementation of Real Estate (Regulation and Development) Act, 2016 (RERA) has been one of the most significant and transformative steps for Indian real estate sector. With a regulatory mechanism in place, the consumers’ grievances can now be resolved faster. He added, “Additionally, it has enabled the developers to understand their responsibility and work within their competencies. As a result, they are increasingly becoming realistic in offering the right products at the right price point. This is facilitating speedy execution of projects and creating a win-win scenario for both developers and homebuyers. Despite the initial transitional challenges, the positive impact has been amply visible over the last two years with improving home buyer sentiments and increasing transparency and accountability in the sector. Till date, 22 states and 6 union territories have already notified their RERA rules, of which 19 states have websites that are operational. SOBHA believes that RERA will continue to drive the sector and the Indian economy towards sustainable growth.”

Om Ahuja, Chief Operating Officer – Residential Business, K Raheja Corp said, “RERA has brought a perceptible change in the consumers’ confidence with respect to investing in real estate. The RERA authorities and the very comprehensive website play a prompt role in addressing grievances with pragmatic solutions and have had a positive cumulative effect on the market sentiment. Sure, there are areas that need focus, like mechanisms for title land ratings, procedural systems, etc., which will fortify confidence. We believe RERA has created a level playing field while bringing in transparency. With the fly-by-night operators clearing up, and more confidence infused, we look forward to the performance of the industry only pointing north in the times to come.”

While speaking about the major changes that RERA brought in the real estate sector, Vivek Ram, Project Head, One Mahalaxmi, said that RERA has brought a sense of formalization to the sector which has been burdened by multiple layers of bureaucracy at all stages with respect to the construction of the building. Amongst 2 of the biggest changes that RERA has brought is the fact that there is a body that is dedicated to hearing the pleas of buyers. It is quick and easy to approach. It has also clearly established carpet area definition and sale only on RERA carpet area and removing fragmentation of quotation of various other area used by different projects/ builders, thereby establishing a level playing field for all the projects in the consideration set of the potential buyers. For the end-consumer, it allows him or her to see all updates on the property in one platform which has definitely added a positive sense of conviction.

As far as transparency is concerned, Ram said, “For an Industry that didn’t have a regulator, developers are today being more transparent in the advertisement, following the guidelines laid down by RERA.  The ideology of RERA is most definitely transparency which has led to positive momentum in the market but there has been a lapse from the RERA administration to ensure a constant updating of this platform. A lot has been achieved in the short time it has been there but this is still a big area of improvement. MahaRERA has simplified the process of grievance resolution by enabling the aggrieved buyer to file complaints online and allowing speedy hearings.  It also enables such buyers to represent themselves without hiring expensive lawyers. This has substantially simplified the process of dispute resolution and complaint redressal compared to pre RERA scenario of approaching civil courts for such matters which was time and cost consuming.”

Harish Sharma, CEO, Centrum REMA said that after the introduction of RERA, there has been a definite move towards timely delivery of projects while bringing transparency to the overall industry. He said, “Customers today can on the click of a button know the status of a project and about various detailed parameters. This has also led to the standardization of parameters and both developers and brokers today follow practices so as to be RERA compliant. This has brought back the much-needed faith and trust in the sector.”

Mr.Aditya Kedia, Managing Director, Transcon Developers said, ” The RERA Act that was implemented on 1st May 2017 completes two years. The positives of this act are many and have played a pivotal in cleaning the realty segment. It has seen a huge success in Maharashtra with the state having registered the most number of projects – 20, 718 residential projects under the RERA Act. This is good news for us Mumbai developers. With so many projects having a RERA cover, real estate investment is no longer considered as a risky proposition but is actually considered as one of the best assets to invest in. While previously there were cases of delay in possession owing to issues regarding various certificates, today the developer knows well that any delay in possession will lead to a huge penalty. The transparency in the sector is bringing in more consumer interest in India as well as NRIs and HNIs. Additionally, due to the compulsory registration of agents under RERA, cases of fraud are a thing of the past. While MahaRERA is a huge success, there are still 12 states and Union Territories that need to implement it. Once this is done, RERA will be successful across India and the realty segment will reach a new high.”