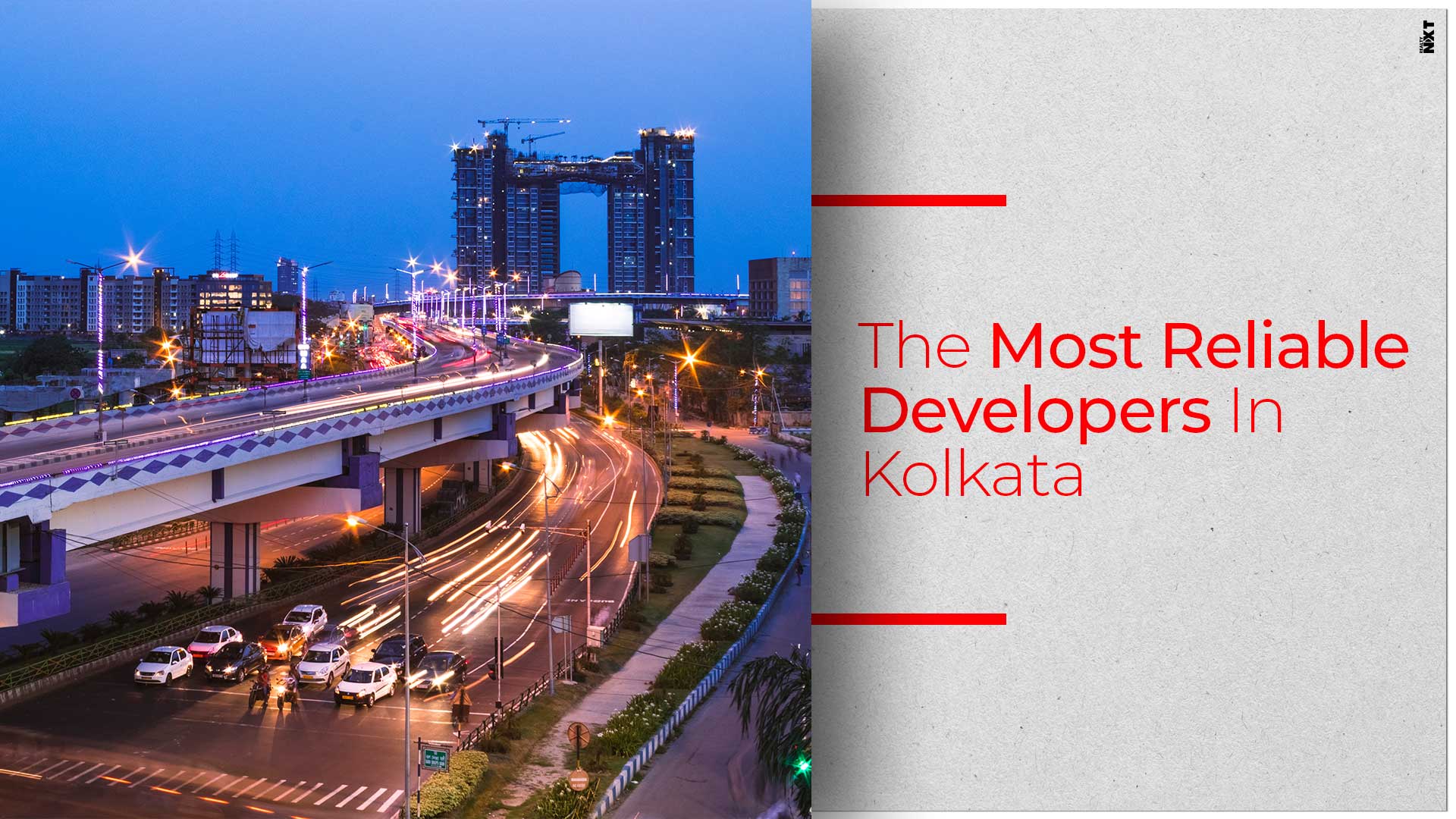 From New Town to Rajarhat when it comes to real estate, there are prominent developers who are redefining the ‘City of Joy’ Kolkata

Kolkata is the educational, commercial and cultural centre of the Eastern part of India. The third most populous metropolitan city of India, the city is popularly known as the “City of Joy”. There are many spaces in the city where time seems to have come to a standstill. With cycle rickshaws and trams, the city lets you live the bygone era in style.

RealtyNXT looks at the prominent developers based in the city of Kolkata.

Led by Harshavardhan Neotia, Ambuja Neotia operates across different verticals which involves realty, hospitality, healthcare and education. The company has created some of the well-known projects in Kolkata. Some of them are Fort Raichak, Kolkata’s first luxury getaway. Then there is Ganga Kutir just beside the Ganges, the company is also the brainchild behind City Centre. City Centre is a mall and is considered as a landmark amongst different malls that have come up in Kolkata’s urban landscape.

Ambuja Neotia had received the award of being India’s Top Developer at CW Architect and Builder Awards in 2018. The company has some ongoing projects in Ultadanga, Dum Dum and Mukundpur.

Master Properties Private Limited (MPPL) was incepted by H.P. Ramchandani and Shri Indrajit Guha (Ex-Home Minister of India). The idea was to change the landscape of housing projects in Kolkata. The key was to deliver high-quality infrastructure at affordable prices.

The journey began with the creation of “Sonny Heights” located in the posh locality of Kolkata. Post the success of Sonny heights, MPPL built projects in Queens Park and Elgin Road. These two projects propelled MPPL in the hallmark of reputed developers. Post this development the company focused on the development of a 1,000,000 sq ft. project called Susheila Apartments in Madhyamgram. This also marked MPPL’s foray into the affordable mass-housing segment properties in Kolkata.

Founded in 1984 by Sushil Mohta, Merlin Group is a well-known real estate firm. The group has executed projects in Kolkata, Ahmedabad, Raipur, Chennai as well as Colombo. Their portfolio of projects includes residential and commercial complexes, office buildings and townships.

Merlin Group is the brainchild behind the South City Projects which is Kolkata’s showcase project in township development. South City Altair, an iconic 68 storied tower which is coming up in Colombo is an extension of the same brand. The tower is being designed by Moshe Safdie, who designed the Marina Bay Sands Resorts, Casino and Shopping Mall based in Singapore.

Siddha Group strives to make good living affordable. The group has built projects in Kolkata, Jaipur, Mumbai and Bangalore. Led by Group Chairman Chandra Prakash Jain and Group Managing Director Sanjay Jain, the group has been creating home and workspaces with a difference.

Since its inception in 1986, Siddha Group believes in the art of homemaking. The group has mastered it by merging superior materials and excellence in design with the latest construction techniques. In the year 2018, the group won the “Best Low Costing House of the Year Award” for their project “Siddha Town in Madhyagram.” Likewise, their project, “Siddha Galaxia” won the “Best Residential Project in the Affordable Segment – Kolkata” Award at CNBC AWAAZ Real Estate Awards 2018.

Led by Chairman Srawan Kumar Himatsingka, a Chemical Engineer from BITS Pilani, the Ideal Group came into existence in the year 1982. High-quality comfortable homes and efficient commercial properties have been the benchmark of the company.

Headquartered in Kolkata, the group has built homes for 5,200 happy families. Sustainability lies at the heart of the group and more than 50 lakh sq.ft of it projects are IGBC certified and pre-certified Green Projects. These homes feature sustainable features like water harvesting infrastructure, solar panels and waste composting and are designed using technologies which are eco-friendly. Some of their ongoing projects are based in Sonarpur, Tollygunge, Kakurgachi, Sealdah, New Alipore etc.

Under the leadership of Pradip Kumar Chopra, the Chairman and Surendra Kumar Dugar, the Managing Director, PS Group has created numerous residential, commercial and retail projects. The group was incepted in the year 1986. The group has successfully developed 105 projects while more than 10 million sq.ft. of land spaces are under construction. Based in Kolkata the group has developed projects in Chennai, Coimbatore, Patna and Kolkata.

In April 2019, PS Group announced the launch of their new project, One 10, which dedicates 70 percent of its total area to the open space. The project is based in New Town and a IGBC Pre-Certified Gold rated development.

Unimark Group is led by Chairman Harsh Patodia. Mr Patodia has been elected as National President of CREDAI for the next term (2021-23). Under Mr Patodia’s leadership, Unimark has built some of the path-breaking creations across multiple categories. The categories include premium residential complexes, hi-tech commercial buildings, malls, world-class IT parks and new-age integrated townships totalling over Rs. 10,000 crores.

The total project portfolio of the Unimark Group spans 15 million sq.ft. The group also happens to be one of the developers of the country’s tallest structure, the iconic Trump Tower in Kolkata which comprises of 140 luxury apartments. Trump Tower is based in Eastern Metropolitan Bypass Road, Kolkata.

Belani Group was incepted in 1967 by K.P.Belani with the idea of offering a distinctive lifestyle to the people of Kolkata. At a point in time when high-rises were completely unheard of Mr Belani introduced the concept of high-rises in Kolkata.

As a result, buildings like Neelambar, Neelkamal, Neelkanth and the Shakespeare Court came into existence in the 70s. Himalaya House which is located in Park Street area is yet another testimony to the brilliance of Mr Belani. The group has ongoing projects in Madhyamgram Chowmatha, Batanagar, Rajarhat and some upcoming projects in Behala and Tollygunge.

Bengal Peerless Housing Development Company Ltd [a joint venture between PGFI and the West Bengal Housing Board] began its operations in 1994 with twenty lac rupees. Today the Company’s net worth stands at eighty crore rupees. Led by CEO Ketan Sengupta, the company believes in designing environment-friendly homes and commercially viable business spaces.  One of the landmark creations of the company happens to be the Sonar Taree Housing Complex in Shantiniketan. It is regarded as Bengal’s most environment-friendly housing complex.

Since its launch in 1994, Bengal Peerless has created 4,000 residential units. The company has also launched the second phase of Avidipta, a twin tower project near Metro Cash and Carry on the eastern metropolitan bypass in Kolkata in 2018. Mr Sengupta was adjudged as the CEO of The Year in 2018 by ET Now Real Estate Awards. And in the same function, the company had also received “Affordable Housing Developer of the Year Project” for Avidipta 2.

Over the past two decades the Eden Group, Kolkata has diversified its business portfolio and it includes real estate. Sachchidanand Rai, Chairman, Eden Realty Group heads the real estate operations at Eden Group.