SHANGHAI, Aug. 7, 2019 /PRNewswire/ — The widely-anticipated “2019 Global Esports Conference” commenced in Shanghai on August 3. The conference, led by the government, gathered leading industry figures to discuss issues facing the global esports industry, including the overall infrastructure, productization and commercialization, as well as new growth points for the industry as a whole.

Chi Yufeng, chairman of Perfect World Investment & Holding Group, attended the event and delivered a speech, saying, “Perfect World has always been looking for a new way somewhere between games and traditional sports as an entry point into the world of esports. The esports business will be one of the most important new directions for the company.” 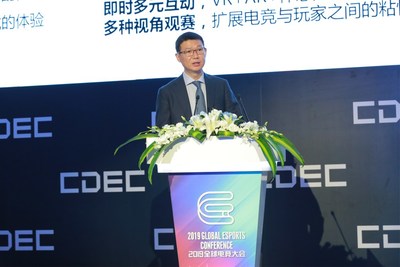 Esports, a new industry that has been increasing in popularity in recent years, owes its popularity not only to the growing public interest, but also to the huge advances in the technologies that drive the sector’s development. Mr. Chi believes that esports may have first been a derivative of video games, but has since grown into a brand new field completely apart from that of gaming. Its future potential should be examined chiefly from the perspective of sports.

Mr. Chi compared the NBA and DOTA2 as an example to show how esports can be comparable to traditional sports in terms of the business model, the competitive aspects and the visual appeal, demonstrating its great potential.

As for the future development trend, Mr. Chi said that “5G will be a big boost for esports, while its integration into many platforms will open up many other possibilities, especially as a vehicle to spread Chinese culture around the world.”

Perfect World is one of the first companies to operate and manage esports products and events in China. With the successful operation of well-known esports products, including DOTA2 and Counter-Strike: Global Offensive (CS: GO), and related events, the company has created and improved its own 3D event system and accumulated rich experience in the management of world tournaments.

The International DOTA2 Championships (TI9) is around the corner, which will be held in Shanghai this August. It the first time that the tournament is held in China and it has the largest prize pool at a single esports event ever. Perfect World, the service provider of DOTA2 in mainland China, will leverage its competence to assist in holding this grand event.

The annual Global Esports Conference is a key event both inside and outside of the esports industry. This year’s conference not only sparked off pioneering insights on the development of the global esports industry, but also hosted the inauguration of Shanghai Esports Week. It also announced standards for the construction and operation of esports venues, alongside supporting policies for the esports industry of Pudong New Area. These moves will help establish Shanghai as the “esports capital” of the world.