DUBAI, UAE, Sept. 16, 2019 /PRNewswire/ — The first meeting of the Higher Committee of Human Fraternity was recently hosted by His Holiness Pope Francis at the Vatican, the headquarters of the Roman Catholic Church. The inaugural convening of the Committee brought all members of the newly-established, independent body together, galvanized by a shared vision of unity and peaceful co-existence. 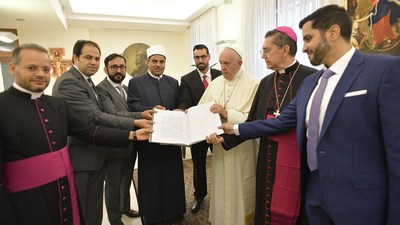 The Higher Committee of Human Fraternity, first announced in August, consists of religious, educational, and cultural leaders from across the world who are inspired by the Document on Human Fraternity for World Peace and Living Together, signed by His Holiness Pope Francis and the Grand Imam of al-Azhar, His Eminence Sheikh Ahmed el-Tayeb, in Abu Dhabi, the capital of the United Arab Emirates (UAE) during the Pope’s visit in February this year.

The meeting, which was held in Casa Santa Marta in the Vatican City, focused on establishing the organizational structure and mandate of the new body, as well as endorsing its independence as an advisory committee empowered to progress the goal of peaceful coexistence outlined in the Document on Human Fraternity.

The Pope greeted the members and heads of the secretariat of the Committee and presented the members with a copy of the Document on Human Fraternity. He then expressed words of gratitude and commended the group as “artisans of fraternity”, encouraging them to be at the origin of new policies “not only of outstretched hands but of open hearts”. After being received by the Substitute of the Secretariat of State, H.E. Mons. Edgar Peña Parra, the Committee returned to Casa Santa Marta to start its work.

During the session, the members appointed the Committee President, H.E. Mons. Miguel Angel Ayuso Guixot, MCCJ, and the Secretary, Mohamed Mahmoud Abdel Salam, as well as the members of the Executive Office, Mons. Yoannis Lahzi Gaid, Yasser Hareb, and Sultan Alremeithi. They also worked on the text of the Statutes that will regulate the Committee’s activity.

The Committee expressed its gratitude to Pope Francis for his welcome and thanked the Grand Imam of al-Azhar, His Eminence Sheikh Ahmed el-Tayeb for his encouraging words. Gratitude was also expressed to H.H. Sheikh Mohamed bin Zayed Al Nahyan, Crown Prince of Abu Dhabi, for the support he has offered the initiative.

Finally, the Committee set the next meeting on 20 September 2019 in New York, when they will come together again for a major celebration of the initiative for Human Fraternity.

For more information on The Higher Committee for Human Fraternity, please visit www.forhumanfraternity.org