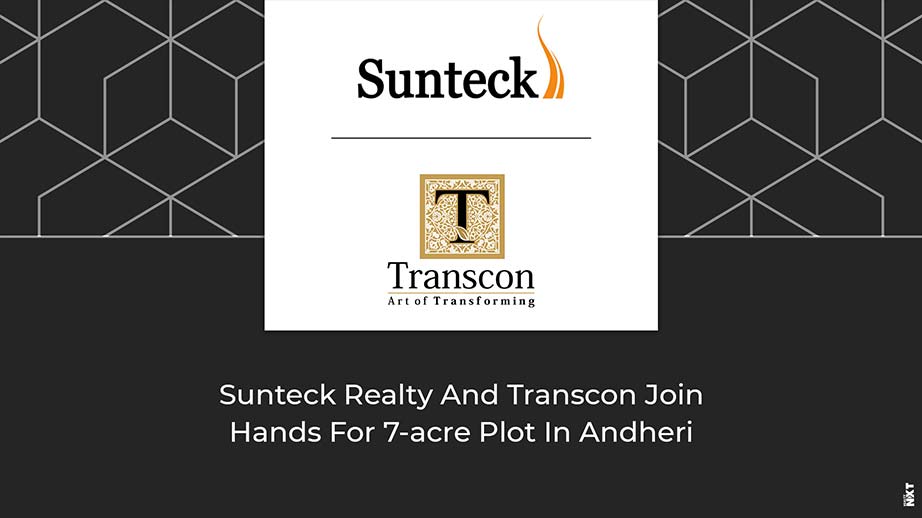 As per the joint development agreement (JDA) terms, Sunteck Realty and Transcon Developers will be sharing the project’s revenue, estimated to be around Rs 2,500 crore to Rs 3,000 crore based on the ongoing property rates in the vicinity, in 54 percent and 46 percent proportion, respectively.

The plot has total development potential of around 1.1 million sq ft and both the developers are planning to build a mixed-use project including three residential towers and some part of this as commercial and retail component. The entire development is expected to be completed over the next 4-5 years.

“During a time of consolidation in the industry, this acquisition gives us a significant edge by expanding our portfolio and footprint in the Mumbai Metropolitan Region (MMR). This project will further strengthen the cash flow and balance sheet of the company,” said Kamal Khetan, CMD, Sunteck Realty while confirming the transaction.

While approvals and clearances will be Transcon Developers’ responsibility, Sunteck Realty will handle construction, execution, sales and marketing of the project.

The project is located between the two major connectivity nodes of New link Road and Veera Desai Road and has proximity to localities like Versova and Juhu.

“Transcon has a large master development portfolio, where we partner with credible branded developers for our land bank. Our first phase here, ‘Transcon Triumph’ is a boutique luxury project that has attracted many celebrity buyers and is close to getting its Occupation Certificate. For the second phase, we are working on a partnership with Sunteck,” said Kirti Kedia, CMD, Transcon Developers.

Transcon is already developing a 38-storey premium residential tower adjacent to the said plot and the project, given its location has already attracted high-profile celebrities as its homebuyers. However, this nearly completed residential tower will not be part of the new joint development agreement between both the developers. Sunteck is planning to offer configuration of 3-bedrooms and more priced above Rs 3 crore at this proposed new project.

Transcon is also jointly developing projects with Rustomjee Group at Thane and Sheth Creators at Malad.

Policy level changes in recent years, including the implementation of Real Estate (Regulation and Development) Act, 2016, the Goods and Services Tax India and demonetisation have resulted in consolidation in the real estate sector. Several developers across markets are now looking for stronger players to associate with through joint developments, joint ventures or even exiting a few projects completely.

Earlier, developers preferred to invest in the creation of a land bank and sought low-cost land parcels in upcoming areas for later development. With the evolving operational environment under the RERA and GST regimes, developers have been relooking at the business model.