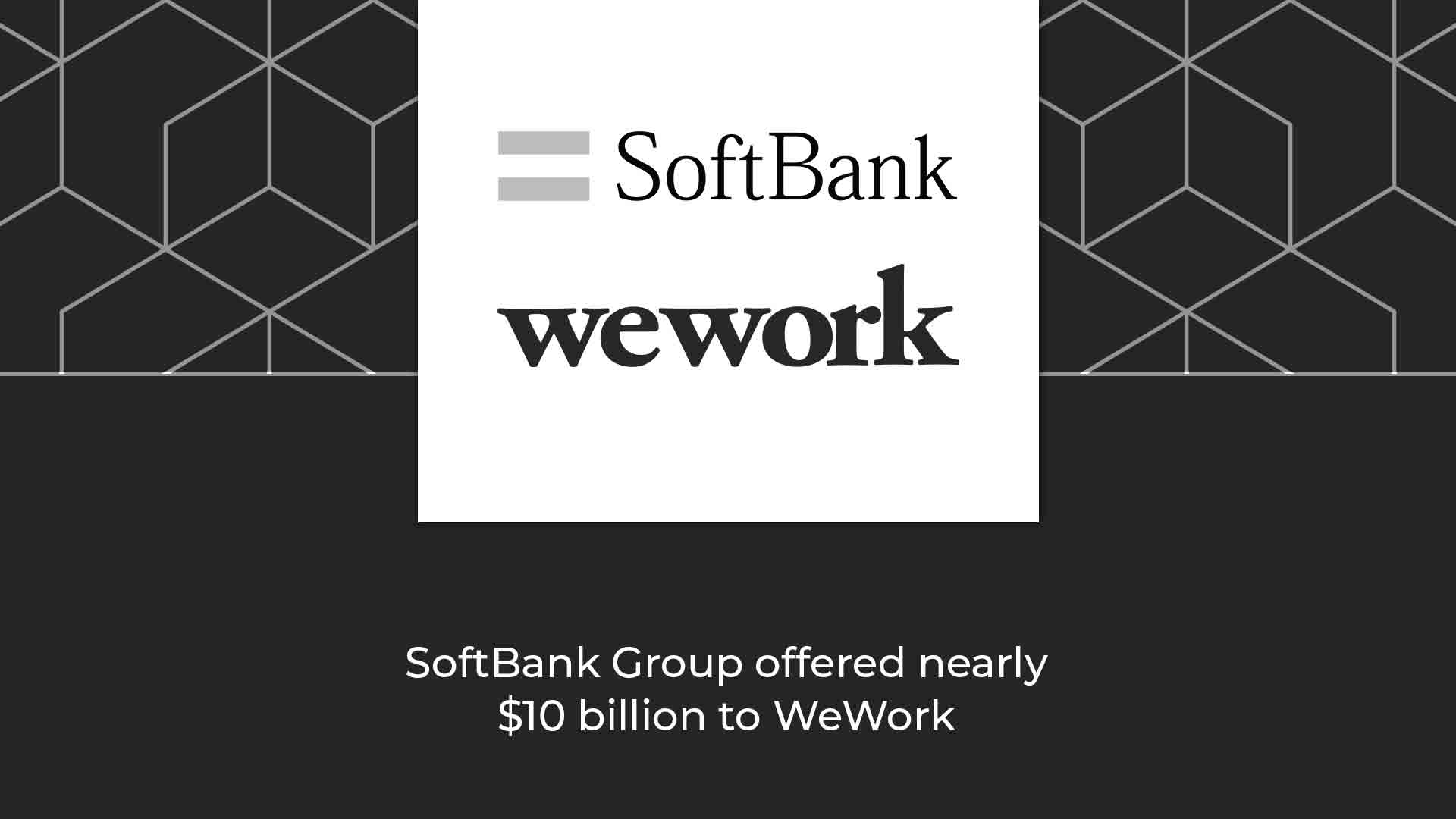 SoftBank Group offered nearly $10 billion on Monday to WeWork and its shareholders under a takeover plan that would keep the U.S. office-space sharing start-up afloat and lead to the exit of its Chairman Adam Neumann, sources said.

It abandoned the IPO when investors questioned its large losses, the sustainability of its business model and the way WeWork was being run by co-founder Neumann, who gave up his CEO title last month and now serves as board chairman.

WeWork owner The We Company’s board will meet on Tuesday to evaluate SoftBank’s offer against an alternative financing proposal from JPMorgan Chase & Co, the people, who were familiar with the matter, said.

JPMorgan faces challenges in putting together a debt package for WeWork, because it has not underwritten it and is trying to find banks and institutional investors to back it, the sources added.

This commitment was made in January at a $47 billion valuation, but SoftBank is now seeking to renegotiate it at a valuation of about $8 billion, the sources added.

SoftBank is also proposing to launch a tender offer for up to $3 billion to acquire WeWork shares from existing investors and insiders, including Neumann, the sources said. Based on the outcome of the tender offer, SoftBank could own between 60% and 80% of WeWork but will seek to avoid consolidating the company on its books, one of the sources added.

SoftBank and its $100 billion Vision Fund already own about a third of WeWork through previous investments totaling $10.6 billion.

Neumann could step down from The We Company’s board as part of the deal with SoftBank and become an adviser, according to the sources. SoftBank Chief Operating Officer Marcelo Claure would succeed Neumann as chairman, the sources said.

SoftBank has lined up Mizuho Financial Group Inc as part of its syndication of the $5 billion debt package, one of the sources said. The package comprises letters of credit for more than $1 billion, as well as senior secured and subordinated bonds, the source added.

The We Company’s seven-member board tasked two directors with representing the interests of all investors in the company by sitting on the special committee considering the financing plans, Reuters reported earlier this week.

One is Bruce Dunlevie, who is a general partner at WeWork shareholder Benchmark Capital. The other is Lew Frankfort, who is the former CEO of luxury handbag maker Coach.

Artie Minson, previously WeWork’s chief financial officer, and Sebastian Gunningham, who was a vice chairman at the company, are now serving as its co-chief executives.

Facing a cash crunch, WeWork is seeking to slow down its expansion, reducing the number of new property leases it is taking on.

The We Company’s board has also agreed on a cost-cutting plan that includes layoffs, Reuters reported last week. The cuts will occur over the coming weeks, the sources added.

Neumann’s exit from The We Company’s board would represent a dramatic fall from grace, given Wall Street’s expectations earlier this year that he would lead one of corporate America’s most hotly anticipated stock market debuts.

While Neumann’s investors were willing to entertain his eccentricities since co-founding WeWork in 2010, his free-wheeling ways and party-heavy lifestyle came into focus once he failed to get the company’s IPO underway.

During the attempts to woo IPO investors last month, Neumann was criticized by corporate governance experts for arrangements that went beyond the typical practice of having majority voting control through special categories of shares.

These included giving his estate a major say in his replacement as CEO, and tying the voting power of shares to how much he donates to charitable causes.

Neumann had also entered several transactions with We Company, making the company a tenant in some of his properties and charging it rent. He has also secured a $500 million credit line from banks using company stock as collateral.

Neumann, 40, is not the first founder of a major start-up to be forced to step down recently. Uber Technologies Inc co-founder Travis Kalanick resigned as CEO of the ride-hailing start-up in 2017 after facing a rebellion from his board over a string of scandals, including allegations of enabling a chauvinistic and toxic work culture.

ALSO READ: SoftBank in talks to take control of WeWork