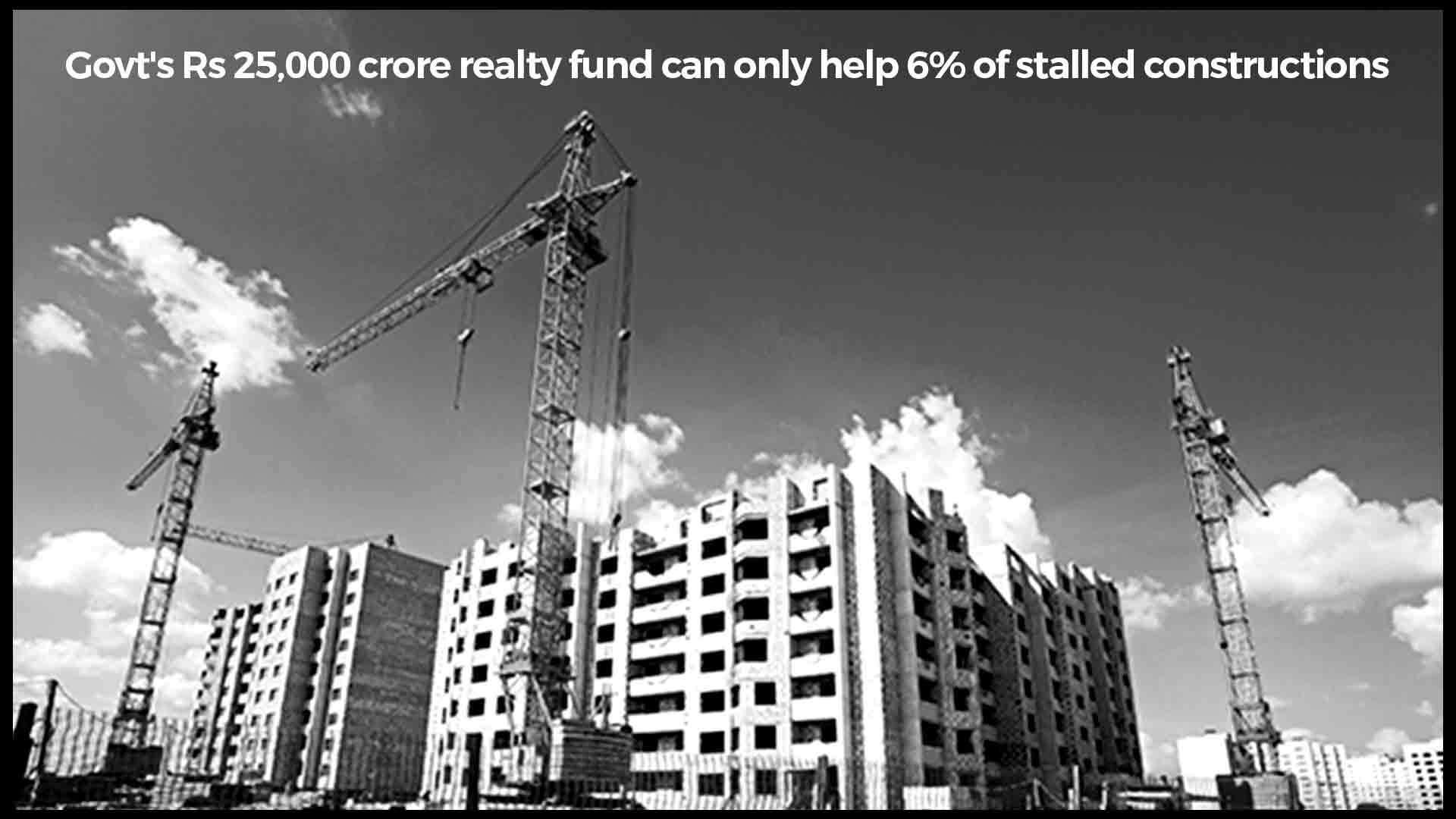 India’s plan to set up a Rs 25,000-crore ($3.5 billion) fund to salvage stalled residential projects will only be sufficient to complete about 6 per cent of constructions that are running behind schedule.

The new programme announced by Finance Minister Nirmala Sitharaman on Wednesday is an improvement on a $1.4 billion real-estate corpus announced in September and, unlike the previous plan, it will also support projects written off by lenders as bad loans. With $63 billion of housing projects stuck for lack of funds, the latest measure will help unclog the financing pipes, said Anuj Puri, Chairman of Anarock Property Consultants.

The fund size isn’t enough to cover the entire problem but will act as a “lubricant to start the wheel that had been jammed,” Puri said in an interview. Once projects are revived and completed, money will start circulating in the system, which will help all developers, he said.

Developers say authorities need to carefully structure and price the fund, and roll it out quickly, for it to succeed.

The new fund “will be in the form of an alternate investment fund (AIF) with the government contributing Rs 10,000 corre,” Sitharaman said. Life Insurance Corp., State Bank of India and others are likely to contribute the remaining Rs 15,000 crore.

The fund could take as much as six months to be operational, screening of eligible projects will need time, and “at best” will help around 16 per cent of stalled projects “over a period of time,” Jefferies analysts led by Bhaskar Basu wrote in a note.

In all, about 576,000 projects worth some Rs 4.6 lakh crore ($63 billion) are running behind schedule across seven big Indian cities, according to Anarock data.
“The devil lies in the details,” Boman Irani, Chairman of Mumbai-based developer Rustomjee Group, said by phone. For the fund to be viable, real estate companies mustn’t have to pay more than 9 per cent, which may hamper interest from external investors, he said.

State Bank of India’s investment unit SBICAP Ventures Ltd will be the investment manager in charge of determining and monitoring the usage of the fund. The fund will mainly structure its investments in the form of non-convertible debentures and the investment manager will determine expected returns based on the risk profile and other details of specific projects, the government said in a statement Thursday.

The last-mile funding provided should be made the most senior debt in the waterfall, according to analysts at Nomura Holdings Inc. and Anarock’s Puri.

An analysis of about 11,000 home builders by research firm Liases Foras in February showed that developers on average have to repay twice as much in debt each year as the income they generate that can be used to service it. This comes as property prices in India’s biggest cities are flagging — home values in Mumbai sank 11 per cent last year following a 5 per cent decline in 2017. India introduced a law with strict punishments for building delays in 2016.

The inclusion of projects that had been written off as bad loans will benefit several incomplete housing projects in areas like Noida near New Delhi, according to Niranjan Hiranandani, President of the National Real Estate Development Council.