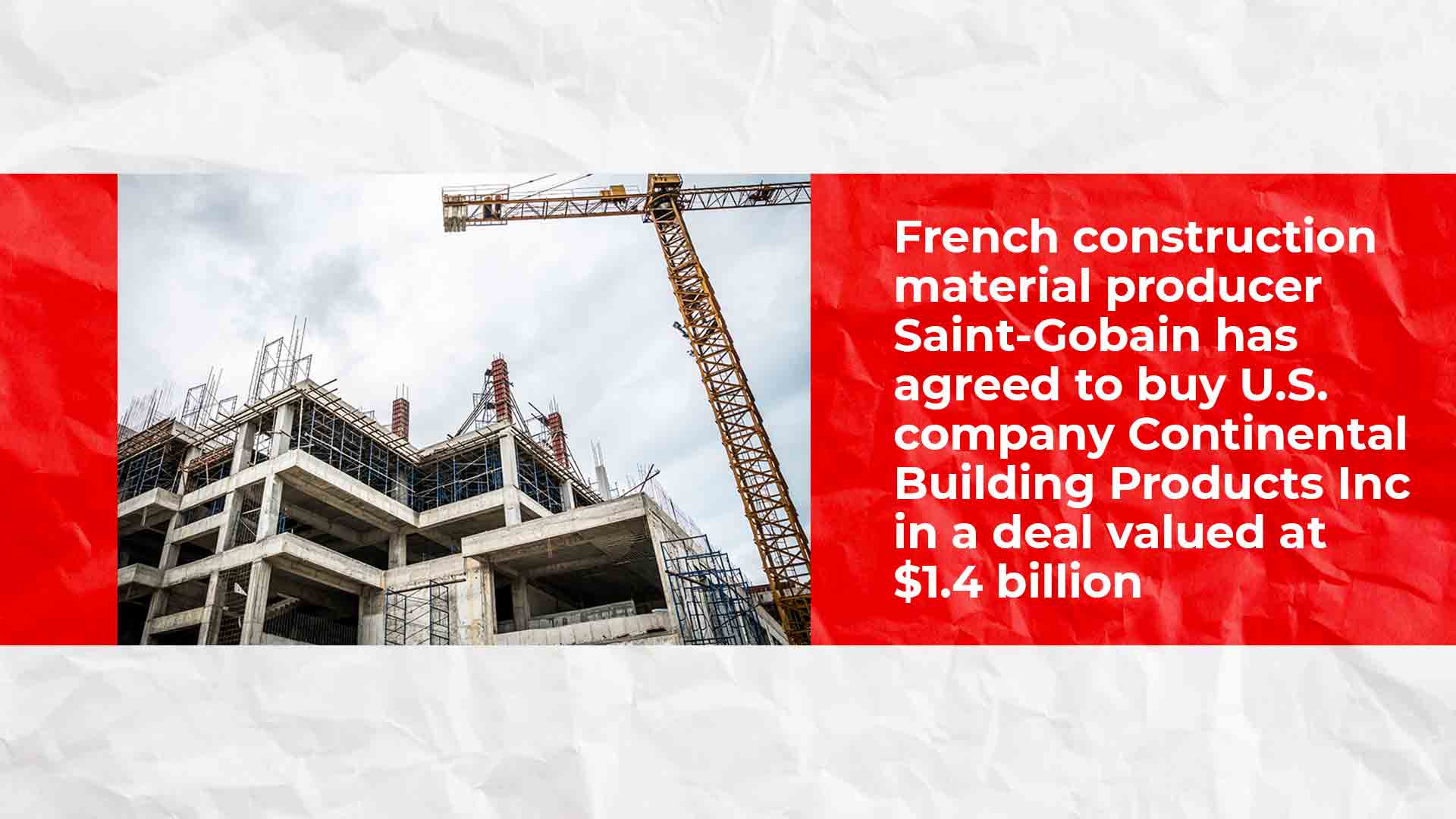 However, Saint-Gobain’s shares fell 2.4% in early trade, with some analysts saying the deal appeared to be on the pricey side given uncertainty surrounding the U.S. construction market.

French construction material producer Saint-Gobain has agreed to buy U.S. company Continental Building Products Inc in a deal valued at $1.4 billion, which Saint-Gobain said would boost its earnings and profile in the U.S. market.

However, Saint-Gobain’s shares fell 2.4% in early trade, with some analysts saying the deal appeared to be on the pricey side given uncertainty surrounding the U.S. construction market.

Saint-Gobain will pay $37 per share in cash, representing a 3.5% premium to Continental’s closing price on Tuesday. The transaction was announced by both companies late on Tuesday.

Investment bank Jefferies said Saint-Gobain was buying the company at a “peak multiple”, while Roche Brune Asset Management fund manager Gregoire Laverne said Saint-Gobain could be buying the business at a tricky time for the U.S. construction sector given general uncertainties over the global economy.

“The deal will have an accretive effect on Saint-Gobain’s margins, but investors remain nevertheless somewhat cautious over it given the uncertainty over the economic cycle,” said Laverne.

Continental will be merged into a newly formed unit of Saint-Gobain. The deal has been approved by both companies’ boards and is subject to approval by Continental stockholders and antitrust regulators.

Saint-Gobain said the U.S. company is expected to have 2019 revenue of around $510 million and adjusted earnings before interest, tax, depreciation and amortisation (EBITDA) of around $130 million.

It said the acquisition would create an opportunity for around $50 million in terms of cost savings, or synergies, by the end of the third year following the formal closing of the transaction.

The French company will finance the takeover via proceeds from sales of other non-core parts of its business.

Saint-Gobain’s Chairman and Chief Executive Officer Pierre-Andre de Chalendar described the acquisition as “a unique opportunity allowing Saint-Gobain to move to the forefront of plasterboard and construction solutions in North America.”

De Chalendar also told reporters on a conference call on Wednesday that Saint-Gobain would continue to examine further takeover opportunities next year, as the French company pursues a strategy it calls ‘Transform & Grow’, aimed at boosting its results and returns for shareholders.

U.S. bank Citi was the financial adviser to Continental, while Gibson, Dunn & Crutcher LLP was the legal counsel.