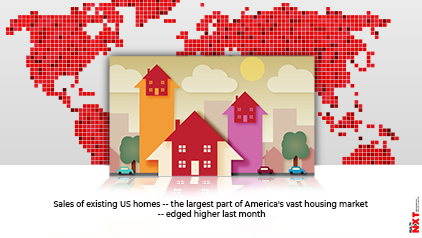 The faster sales should support GDP growth at the start of the fourth quarter, although sales declined in some regions.

Sales of existing US homes — the largest part of America’s vast housing market — edged higher last month despite rising prices and tighter supplies, according to an industry report Thursday.

The higher sales rate in October marked a recovery from the dip in the prior month and underscored continued willingness to buy amid low unemployment and rising wages.

The faster sales should support GDP growth at the start of the fourth quarter, although sales declined in some regions.

Sales were lifted by gains in the South and Midwest but fell elsewhere, according to the National Association of Realtors’ monthly report.

NAR chief economist Lawrence Yun said low mortgage rates were drawing in consumers who are increasingly able to enter the market as wages climb, although the supply of available homes remains a challenge.

“We will likely continue to see sales climb as long as potential buyers are presented with an adequate supply of inventory,” he said in a statement.

Inventories, meanwhile, fell 2.7 percent from September to 1.8 million units, representing a supply of 3.9 months at the current sales rate.

Ian Shepherdson of Pantheon Macroeconomics said housing sales were recovering from the blow caused by the 2017 income tax cuts, which limited federal deductions for state and local real estate taxes.

“The recovery from that hit is not quite yet complete, but the trend in sales clearly is rising,” he said in a client note.

“Recent mortgage applications data point to further increases in sales over the next few months.”

ALSO READ: Home sales have shot up by 22% in Jaipur