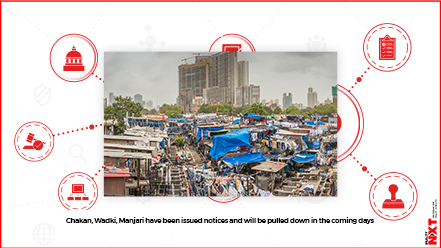 “After monsoon, the PMRDA officials have resumed the drive to demolish the illegal structures after carrying out the due process of issuing notices,” said PMRDA controller of illegal constructions Sarang Awad .

More than 1,000 unoccupied residential and industrial illegal constructions in the Pune Metropolitan Region’s industrial areas such as Chakan, Wadki, Manjari have been issued notices and will be pulled down in the coming days unless their owners seek to regularise the structures by paying penalties as per the state government’s norms.

Pune Metropolitan Region Development Authority (PMRDA) officials stated that as per the state’s norms, the structures constructed after December 2015 could be regularized by paying necessary penalties and such constructions would be declared as “compounded structures” after payment of compounding charges, infrastructure charges and premium by both the owners and the occupier.

“After monsoon, the PMRDA officials have resumed the drive to demolish the illegal structures after carrying out the due process of issuing notices,” said PMRDA controller of illegal constructions Sarang Awad .

An official said due process has been followed by issuing notices to these structures under section 53 (1) of the Maharashtra Regional Town Planning Act. The official added that if the owners did not respond to the notices, the structures were being razed.

“Over the last two weeks, the authorities have pulled down around 15 unoccupied residential buildings and industrial sheds in the Marunje, Theur, Bhandgaon and Wagholi areas and have issued notices to such structures in the industrial areas,” Awad said.

For identifying these structures, the PMRDA recently carried out a pilot project using medium resolution satellite imagery to identify the illegal structures under its jurisdiction spread over 6,984 sq km, comprising nearly 816 villages.

The pilot project was carried out for nearly 228sqkm area, mainly spread over the industrial belt of Chakan, Talegaon, Shikrapur and Ranjangaon. The officials had then identified these structures and sent notices to their owners after validation from experts and maps.