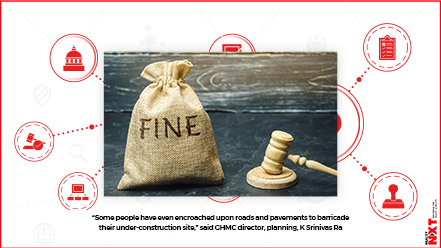 “Some people have even encroached upon roads and pavements to barricade their under-construction site,” said GHMC director, planning, K Srinivas Rao.

The Greater Hyderabad Municipal Corporation(GHMC) has found that builders ignore basic safety norms such as barricading of under-construction sites, installing dust screens and safety measures for workers during a special drive.

Of the 445 buildings inspected in three days, it was found 195 under-construction buildings were being built in violation of safety norms. The rules being flouted were those regarding barricading the structure, covering it with dust screens and waste disposal.

“Some people have even encroached upon roads and pavements to barricade their under-construction site,” said GHMC director, planning, K Srinivas Rao.

During an inspection by GHMC in the IT Corridor, officials identified buildings where the cellar was illegally dug up. “A plot owner was fined Rs 1.5 lakh for digging a cellar without precautionary measures. Another plot owner was penalised Rs 1 lakh for damaging a road through improper waste disposal,” said a GHMC official.

GHMC found that construction workers were not provided with a safety gear, and only a few builders ensured safety for workers.

ALSO READ: SC ordered state government has to pay an compensation of Rs 25 lakh to each flat owner