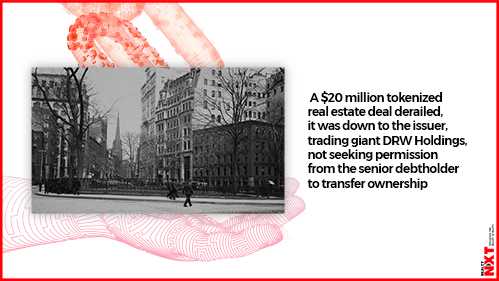 Here’s a reality check – or realty check, as it were – for tokenization evangelists.

The idea of combining blockchain tokens and U.S. real estate was peaking at the start of this year, with college dorms, ski resorts and swanky Manhattan apartment blocks lined up to redefine the commercial mortgage market.

Following 2017’s initial coin offering (ICO) circus, a second wave of grown-up investors would raise capital and issue loans using blockchain-based tokens, and in the process disintermediate an army of middlemen and bankers.

However, the seismic disruption of the multi-trillion dollar real estate market so hotly anticipated hasn’t happened.

Underscoring the disappointment, the Fluidity and Propellr project was quietly shelved earlier this year. The joint venture was never officially consummated and the firms have since gone their separate ways.

Neither side would discuss the specifics of the venture’s cancelation. But both agree that the tokenized market wasn’t ready for the real estate use case.

“The market was just too young at the time,” said Sam Tabar, a co-founder at Fluidity. “It didn’t have sufficient institutional appetite.”

He described the Propellr partnering as “a contemplated joint venture” in which Fluidity was to be a minor shareholder.

As it stands, trading of private placements and structured transactions in assets like real estate is infrequent and the price is typically lower than net asset value.

Tokenization was seen as a way to remove friction around the transfer of ownership and stimulate liquidity in secondary markets.

Security token offerings (STOs), which are regulated financial instruments, are a workable fit for the tokenization of real-world assets such as real estate – at least on paper.

Making use of an exemption in U.S. securities law called Regulation D, STOs operate like private placements, typically allowing smaller companies to raise capital by selling equity or debt securities to select investors without going through the arduous registration process.

The only thing missing from this brave new token economy was institutional capital to come piling in.

“Tokenized real estate came with an embellished promise,” said Todd Lippiatt, CEO at Propellr. “It came from a place where people were actually mixing verbiage. From my personal perspective, what they were claiming as liquidity, is really market access.”

Institutions want to see liquidity before they will go ahead and re-engineer their entire back office. Meanwhile, issuers have to get tokens into the market to prove their thesis, leading to a chicken-and-egg problem.

Instead of institutional participation, the hype led to a kind of “adverse selection” phenomena, said Lippiatt, attracting people who didn’t have a better option to raise funds, or who had spent a lot of money building blockchain token infrastructure and wanted to follow through with one of their own projects.

“I think at one point we had $3 billion worth of interest in tokenization,” Lippiatt said. “But once you started to sift through it all, there was a bunch of people who wanted to raise money for really bad deals.”

Fluidity and Propellr are in good company when it comes to hiccups and rethinks.

Also earlier this year, a deal to tokenize $20 million worth of student housing put together by blockchain startup Harbor and the real estate arm of Chicago-based trading firm DRW Holdings fell apart, as was first reported by the Block.

According to one person familiar with the situation who spoke to CoinDesk, a basic goof derailed the deal.

The parties overlooked a no-transfer clause that was written into the mortgage on the property, and the holder of the senior debt, Minneapolis-based U.S. Bank, did not grant permission to transfer ownership.

A spokesman for Harbor, which has since pivoted from crowdfunding to a pure technology provider role, confirmed that “the lender would not assent to transfer of the loan,” but added that “the issue was not related to tokenization.”

Neither DRW, the would-be token issuer in the deal, nor U.S. Bank, the lender, replied to requests for comment by press time.

(In April, Evan Lapiska, a spokesman for the bank, told CoinDesk it no longer had “a current or active interest” in the property, known as the Hub at Columbia in South Carolina.)

Depending on how you look at it, enthusiastically charging out into the market armed with a subscription book and some blockchain technology, speaks to the immaturity of this new investment paradigm and the ongoing clash between the old ways and the new.

Since turning its attention away from tokenizing apartment blocks, Fluidity has shifted its focus to other areas where traction is happening, Tabar said.

It has been working on a Tokenized Asset Portfolio, exploring decentralized loans using the MakerDAO multi-collateral Dai system and pledging U.S. Treasuries as collateral. A new Fluidity product is expected to come out next month.

In the end, Tabar’s prognosis on the calcified nature of the real estate market comes down to a broad generational impasse.

“Baby boomers who are still in the seats of power don’t want change at this point in their careers. They just want the system to remain the same so they can extract as much value out of it and have a nice retirement,” he said.

During the time their firms worked together, Lippiatt and Fluidity co-founder Michael Oved co-authored a white paper analyzing the problem tokenization was trying to solve around private placements, and a possible solution, dubbed the Two Token Waterfall.

“It’s not just equity in real estate,” said Lippiatt. “You own the real estate minus whatever debt is owed plus whatever cash flow comes in, the history of payment and so forth. All of this goes into how one might want to evaluate something.”

Looking back, this close attention to detail (plus having compliance requirements encoded into smart contracts), availed the firms when the Securities and Exchange Commission (SEC) came knocking.

Lippiatt recalls the tokenization of a loan on a Brooklyn-based apartment block called FACTOR-805, which was the first real-world asset to incorporate Dai, the MakerDAO stablecoin.

Accepting Dai as well as fiat and distributing Dai as interest payments, attracted the attention of the SEC, which visited Propellr (a registered broker-dealer) and spent several hours interviewing the team and reviewing the transaction.

“Middle of August we had another interview with them [SEC] and they said, ‘we take no exception in the way that you did this deal.’ In other words, ‘we approve.’ So hopefully we helped create policy,” said Lippiatt.

Looking ahead, Propellr remains focused on MakerDAO and the potential of multi-collateral Dai, working on a tokenized mortgage pilot with Berlin-based Centrifuge (“the sort of blockchain partner I was looking for,” said Lippiatt).

“I think we are at the end of Act 1. Act 2 will bring better protocol layers; it will solve some of the privacy issues that people are concerned with, especially in the mortgage landscape,” Lippiatt said. “It’s a long play and hopefully it won’t turn out to be a tragedy.”

There are still a number of interesting projects chipping away at real estate, including the likes of Securitize, AssetBlock, Fundament, Smartlands, Bits of Property to name just a few.

Having evolved from its earlier crowdfunding model, San Francisco-based Harbor has recently helped tokenize $100 million worth of real estate funds in conjunction with the manager of those funds, iCap Equity.

“There is stuff in production,” said Harbor CEO Josh Stein. “We have clients with tokenized securities and there have been some trades in real estate. Is it flying off the shelves? The answer is no.”

Stein acknowledged there might be some disappointment when compared to all the hype, but said the situation is not actually bad at all and rather resembles the look of normal technology adoption.

“We’ve moved on from where people could just yell the word ‘token’ and investors would throw money at it,” he said.