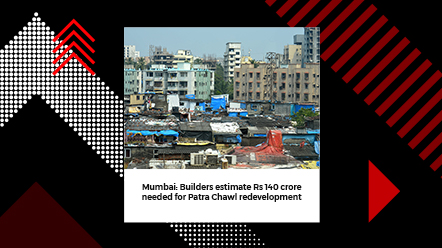 “We submitted the minutes of the meeting to the court. The court has kept the matter for further hearing on December 10. The matter is sub-judice and I cannot comment further,” Radhakrishnan.

On November 20, Justice SJ Kathawalla had directed B Radhakrishnan, Chief Officer of Mumbai Board of MHADA, to meet the nine developers on Wednesday to discuss the approximate cost of construction of the rehab portion and to submit the minutes of the meeting to the court on Friday.

“We submitted the minutes of the meeting to the court. The court has kept the matter for further hearing on December 10. The matter is sub-judice and I cannot comment further,” Radhakrishnan.

As per the court’s orders, Radhakrishnan had chaired the meeting with private developers who purchased land from Guruashish Constructions, a part of HDIL group, in the 42-acre redevelopment project to discuss the cost of construction of the rehab buildings left incomplete by the developer.

During Wednesday’s meeting, MHADA officials had estimated the cost of construction to be Rs 27,500 per sq m. This would be the rate for the total payable built up area of 75,943.48 sq m. The total cost for the project was estimated to be Rs 352 crore, excluding rent arrears of four years and a corpus fund of Rs 25 crore. However, the project cost was revised to Rs 320 crore by MHADA.

During the discussions, the developers proposed that a contractor appointed by them would complete the work on their behalf. Though MHADA as well as tenants representatives agreed to the suggestion, the High Court will take a final call in this regard.

The court’s intervention and the eagerness of developers to revive the stalled redevelopment project have raised the hopes of 672 tenants who have been waiting for their homes since 2010 when the plot was vacated by Guruashish Constructions. As per the tripartite agreement between the developer, MHADA and the tenants’ society, the rehab tenements were to be ready within 36 months, but the construction stopped in 2015 when the work was 40 per cent complete.

Both Guruashish Constructions and HDIL were taken to National Company Law Tribunal by two banks after they failed to repay loans, and their promoter Sarang Wadhwan was arrested last month for alleged role in the collapse of the PMC Bank.