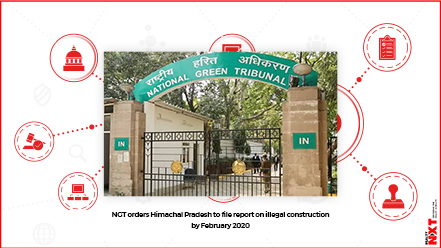 Not happy with this, tribunal said before taking coercive measures against the secretary of town and country planning department, it will give the state one more opportunity to comply.

In a matter related to illegal construction on the Mall Road in Shimla — between a hotel and Indira Gandhi Sports Complex — in violation of National Green Tribunal (NGT) order, state government has failed to file the status report.

Not happy with this, tribunal said before taking coercive measures against the secretary of town and country planning department, it will give the state one more opportunity to comply.

“No status report has been filed nor there is any representative for the state of Himachal Pradesh,” observed the principal bench of NGT headed by its chairperson Justice Adarsh Kumar Goel during the recent hearing on November 28.

NGT posted the matter for February 10 next year with directions to send the copy of the order to secretary of town and country planning department directly as well as through chief secretary of Himachal by email. The issue for consideration is the remedial action against the illegal construction.

Vide order dated November 27 last year, NGT had sought a report from the supervisory committee headed by the secretary of urban development. Accordingly, vide email dated April 22, report was filed by the director of town and country planning department, stating that stay has been granted in the matter by additional district judge of Shimla, against the demolition of unauthorised construction.

NGT vide order dated May 28 had sought explanation as to why illegal construction was allowed in violation of its judgement, close to the office of the municipal corporation (MC) itself. MC commissioner and the director of town and country planning department were required to remain present in person. “It is not clear as to why no vigilance was kept against such illegal activities by the MC,” it added.

As the officers present during the hearing on November 28 were not able to furnish any meaningful explanation, NGT had directed the secretary to furnish a status of enforcement of order before February 10, 2020.

ALSO READ: TNRERA has facilitated transfer of an ongoing project to a new developer