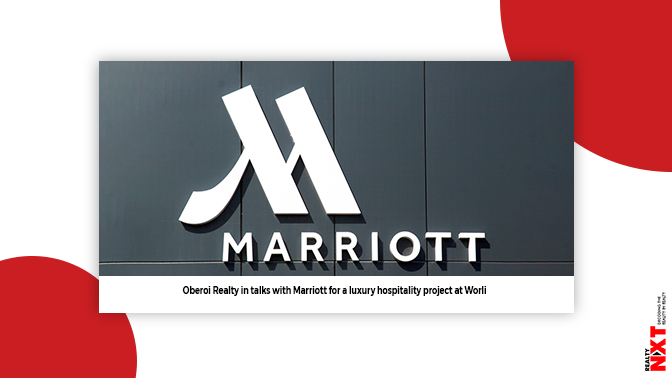 Earlier this week, Marriott International entered into an agreement with Bengaluru-based Prestige Group to open six new hotels with nearly 1,000 rooms across four of its key brands.

Realty developer Oberoi Realty is in talks with Marriott International for a 120-room luxury five-star hospitality project as part of its total 1.8-million sq-ft mixed-use project in Mumbai’s Worli locality, said two persons with direct knowledge of the development.

“The construction work on the project has already started and is likely to be completed in the next three years,” said one of the persons mentioned above.

As part of the total development, the company is planning to build a high end luxury mall spread over leasable area of 0.8 million sq ft and 0.9 million sq ft office block and the hotel will be spread over 150,000 sq ft occupying the top floors of the tower.

It could not be ascertained, however, whether Oberoi Realty is planning to raise funds or induct any private equity player into this project.

Earlier this week, Marriott International entered into an agreement with Bengaluru-based Prestige Group to open six new hotels with nearly 1,000 rooms across four of its key brands.

Oberoi Realty has a relationship with Marriott International through an operational 5-start hotel the Westin Mumbai Garden City in Goregaon, a suburb in Mumbai. This hotel with total 269 keys started operations in May 2010, the year when the realty developer got listed on stock exchanges.

Apart from this, Oberoi Realty is also developing another upscale mixed-use project — Three Sixty West, including branded residences and five-star category 220-key hotel to be managed by the Ritz Carlton, part of Marriott International. This will not only be the third Ritz hotel in India following the two already operational properties in Bangalore and Pune, but also the largest in the country. This hotel is expected to be operational in 2020.

ALSO READ: The Wadhwa Group is set to launch a new project at GMLR, Mulund(W)