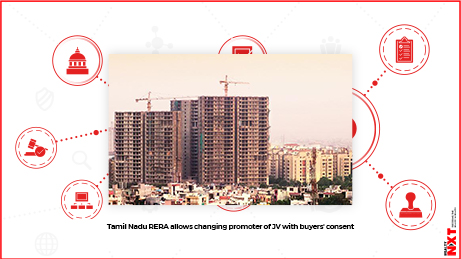 Twentyfour complainant,who had booked flats in the project, had entered into an agreement with the developer, Crescentz Square.

Joint venture housing projects stalled by financial constraints can change hands for completion if a majority of the homebuyers consents. Invoking a provision in the Real Estate Act, the Tamil Nadu Real Estate Regulatory Authority (TNRERA) has facilitated transfer of an ongoing project at Coimbatore to a new developer, after the project stalled with just 30% of construction done.

Twentyfour complainant, who had booked flats in the project, had entered into an agreement with the developer, Crescentz Square. When the project was registered with the TNRERA in October 2017, the delivery of apartment units was scheduled for March this year. A total of 60 apartment units were proposed to be constructed in two blocks, wherein Block-A had 48 dwelling units. The developer had entered into an agreement for a joint venture project with the land owners.

A total of 33 apartment units were sold. However, the project did not proceed on schedule and the developer could not find buyers for the remaining apartments. Till date, only 30% of the housing project had been completed because of the developer’s financial constraints. Meanwhile, the promoter gave his consent to transfer the project to another developer.

The issue was brought to TNRERA, which invoked a specific section that allows a new developer to take over an ongoing housing project. According to Section 15 (1) of Real Estate (Regulation and Development) Act, 2016, the promoter shall not transfer or assign his majority rights and liabilities of a real estate project to a third party without obtaining prior written consent from two-third allottees and prior approval of the Authority.

“More than 2/3rd of the allottees have entered into an agreement for the induction of a new promoter. The original promoter and land owners have also given their consent,” a recent order by TNRERA pertaining to the project said. Twenty-four out of the total 33 allottees gave their consent for the transfer. Besides extending the deadline for completion of the project to November 2021, TNRERA also gave its nod to change the name of the housing project.