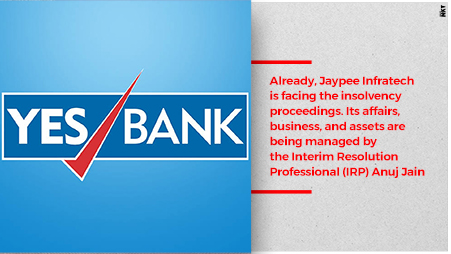 Already, Jaypee Infratech is facing the insolvency proceedings. Its affairs, business and assets are being managed by the Interim Resolution Professional (IRP) Anuj Jain.

“A petition is under filing by Yes Bank Ltd under section 7 of the Insolvency and Bankruptcy Code, 2016 before National Company Law Tribunal (NCLT), Allahabad to initiate Corporate Insolvency Resolution Process against Jaypee Healthcare Ltd (a subsidiary of the company),” the company said in a filing to the exchange.

Already, Jaypee Infratech is facing the insolvency proceedings. Its affairs, business and assets are being managed by the Interim Resolution Professional (IRP) Anuj Jain.

In the first round of insolvency proceedings of Jaypee Infratech conducted last year, Rs 7,350-crore bid of Lakshdeep, part of Suraksha Group, was rejected by lenders.

During May-June this year, lenders rejected the bids of Suraksha Realty and NBCC in the second round.

The matter reached to the National Company Law Appellate Tribunal (NCLAT) and then the Supreme Court.

On November 6, the Supreme Court directed completion of Jaypee Infratech’s insolvency process within 90 days and said the revised resolution plan will be invited only from NBCC and Suraksha Realty.

As many as 13 banks and over 23,000 homebuyers have voting rights in the CoC. Buyers have nearly 60 per cent votes. For a bid to be approved, 66 per cent votes are required. Total claim admitted is over Rs 23,000 crore, of which around Rs 13,000 crore pertains to home buyers and rest of 13 banks.