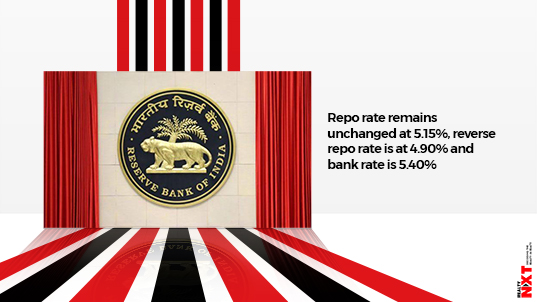 The GDP growth target for 2019-20 is also revised downwards from 6.1 percent to 5 percent.

The Reserve Bank of India on Thursday kept the key policy rate unchanged at 5.15 per cent and decided to continue with its accommodative stance to support the economy. The central bank also revised GDP growth downwards to 5 per cent for 2019-20 from 6.1 per cent projected in its October policy.

“Despite expectations of the rate cut, The Reserve Bank of India (RBI) stayed away from taking a cue from their global counterparts and decided not to continue with repo rate cut for the sixth time in a row, which was the need of the hour to revive the slowing economy. But the Monetary Policy Committee (MPC) decided to take a pause after five consecutive rate cuts this year. MPC lowered the repo rate by 135 basis points between Feb-Oct, 2019.  The GDP growth target for 2019-20 is also revised downwards from 6.1 percent to 5 percent.

The benefit from the previous rate cuts are yet to play out completely and the real estate industry is still reeling under the liquidity crisis. India Inc. was expecting a rate cut of 1.0 instead of small tinkering such as a rate cut of 0.25 bps, which would have provided a boost to the Government’s recent initiatives to kick-start GDP growth.  Announcement of One Time Roll Over to restructure bad loans would have been a logical step for the revival across the industries. Thus, the decision to wait and watch the outplay of previous cuts will go against the current sentiments. The markets overall are disappointed. ” Dr Niranjan Hiranandani, SVP, Assocham, President NAREDCO &MD, Hiranandani Group

“The status – quo maintained by the RBI on the rate cut was much expected. The RBI’s stance of taking a pause looking at the growth – inflation dynamics will not move the economy any further. In the past also, the advantage of the rate cut by the RBI was not passed onto the customers by a majority of the banks, which impacted the growth of the real estate sector. In the given situation, the RBI should not just look at the repo rate revision, but instead, take a holistic approach. It must consider an important area like the restructuring of realty loans, as well as, reintroducing of subvention schemes. It must take steps to streamline much-needed financing into the sector. An IPO of a small finance bank raising Rs 76,000 crore in such a volatile market, is an indication that there is no dearth of finance, but there is a serious issue of confidence. The RBI and the Government should work on this issue to bring back life into the system and the real estate sector, too.” Mr. Rajan Bandelkar – President, NAREDCO Maharashtra and Managing Director, Raunak Group.

“A repo rate cut would have been welcome as it would have lifted industry sentiments. The growth trajectory of the real estate sector will depend on the successive transmission of rate cuts to the end consumers and translate into lower EMIs. Lower interest rates will also bring back fence-sitters who were waiting for the perfect opportunity to invest in their dream home. However, it has been observed that, despite the reduction in repo rates by the RBI in the previous reviews, it did not have any significant impact on lending rates. Going forward, it is imperative for banks to reduce the lending rates and ensure that the home loan borrowers reap the benefits of this move. Real estate sector is one of the few sectors which have the potential to kick start a sluggish economy. Going forward, we request the government to take necessary steps to create housing demand across segments. We look forward to the Government’s constant support to help bring the real estate industry back to global forefront. We hope to see a positive upturn in the real sector soon.” Mr. Surendra Hiranandani, Chairman and Managing Director, House of Hiranandani

“The central bank by keeping the rates unchanged has recognised that the need of the hour is to infuse confidence about the economic growth through a holistic approach. This will come by combining fiscal and monetary measures.

Amidst the ongoing debate of whether the RBI will bottom out its rate cut cycle or continue to slash policy rates, the sixth bi-monthly monetary policy review of 2019 ended with the central bank keeping the policy rate unchanged at 5.15%. The conjectures over the RBI pulling a pause button over rate cuts turned out to be true as it has maintained its accommodative stance.

The decision to maintain policy rates augurs well for the economy as the recently introduced policy reforms will take time to pan out and materialise. The economy needs to absorb the impact of the recently introduced reforms and the previous rate cuts. The real estate sector is expected to pick up due to the favourable policy incentives and the faster transmission of previous rate cuts.

Moreover, with the inflation already crossing the 4 percent mark and expected to remain elevated for a few quarters, further rate cuts would have posed an upside risk.

In light of the recently announced reforms doled out by the government, the real estate sector is expected to register higher growth in times to come. Measures brought so far are likely to show their impact. Complementing the corporate tax cuts and the creation of an AIF fund for stressed projects, the government should explore the options of increasing the money supply in the economy. That would not only encourage consumer spending but also stimulate investment flows and higher credit flow which has come down over the quarters.” Ramesh Nair, CEO & Country Head – India, JLL

“Contrary to overall expectations, the RBI kept the repo rates unchanged to 5.15% while maintaining an accommodative stance. From a real estate point of view, rate cuts are obviously always welcome as they help improve overall sentiment. Also, lag-less transmission of rate cuts to retail borrowers as RBI has mandated banks to directly link interest rates with repo rates. The expected rate cut of 25 bps would have caused home loan values to fall below 8% for first time ever.

However, it is also true that another rate cut alone would have been insufficient to stir housing sales significantly across budget categories. The previous rate cuts throughout 2019 had almost no perceptible impact on residential sales. In fact, back in 2014, even when the home loan rates were high in two digits at 10.3%, housing sales remained at peak levels.

In the present scenario, only the combined effect of lower interest rates coupled with other measures such as a cut in personal taxes – reportedly being considered by the FM – can actually stimulate residential sales out of their current lethargy. ” Anuj Puri, Chairman – ANAROCK Property Consultants