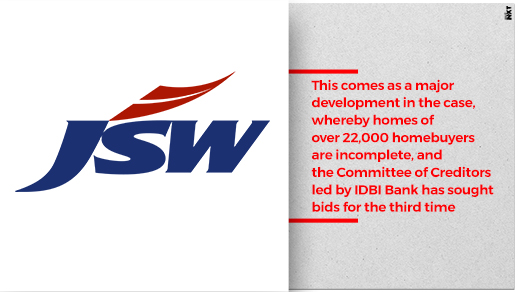 This comes as a major development in the case, whereby homes of over 22,000 home buyers are incomplete, and the Committee of Creditors led by IDBI Bank has sought bids for the third time.

The much-talked about Jaypee Infratech (JIL) insolvency has another player in the game with JSW Infrastructure partnering with Suraksha Realty to support the latter in building and completing the stalled projects of the bankrupt firm.

Sources have confirmed that in its revised and final resolution plan to acquire the JIL, Mumbai-based Suraksha has submitted a letter from JSW Infrastructure Ltd confirming it will provide financial, technical and strategic support to Suraksha for the project.

The letter seen by IANS says: “JSW is keen to be associated with the project and has agreed to provide financial, technical and strategic support to Suraksha Realty for the succes of the project.”

It, however, noted that the final arrangement of the support would be decided upon only if Suraksha wins the bid.

“JSW Group, through its infrastructure arm i.e. JSE Infrastructure Ltd, will finalise the arrangements for this strategic tie-up once Suraksha Realty emerges successful applicant,” it added.

The letter also speaks about the financials and operational achievements of JSW Group and its arms.

The industrial major could not be reached for comments.

This comes as a major development in the case, whereby homes of over 22,000 home buyers are incomplete, and the Committee of Creditors led by IDBI Bank has sought bids for the third time.

Both the applicants, Suraksha Realty and the state-run NBCC (India) and submitted their revised and final bids to the CoC on Tuesday after lenders had sought some clarifications along with sweetened offers. It would be interesting to see if the letter of support from an infrastructure major like JSW Steel actually helps Suraksha to convince the CoC, including the home buyers.

The home buyers have been vocally in favour of the projects going to NBCC’s kitty, as the Centre has assured of tax concessions for the projects only if the public sector construction major takes them over.

In its bid to gain the confidence of the home buyers, officials from Suraksha Realty are also likely to meet them on Thursday.

NBCC too has, somewhat, sweetened its bid and increased its land offering to 1,526 acres of land, enhanced from the previous offer of 1,426 acres.

The CoC sought the bids after the Supreme Court had on November 6 ordered completion of the JIL insolvency resolution process (IRP) within 90 days and said only the resolution plans of the NBCC and Suraksha would be considered by the CoC for completing pending projects.