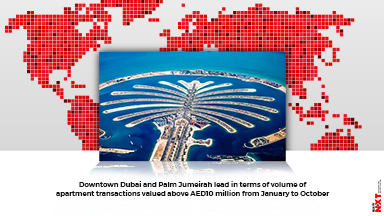 Established areas in Dubai still rank high on the radar of luxury property buyers, according to new research.

Although the sale of a AED90 million villa at District One in Mohammed Bin Rashid City is the costliest house purchase in Dubai so far this year, a closer look at property transactions valued over AED10 million shows that older areas still dominate sales in this segment.

According to statistics from Data Finder, the real estate data and insights platform under Property Finder Group, old favourites Downtown Dubai and Palm Jumeirah lead in terms of volume of apartment transactions valued above AED10 million from January to October.

A lone penthouse that sold for AED74 million in The One at Palm Jumeirah was the second most pricey property transaction this year.

When it comes to luxury villa sales, both established and new communities have performed equally well in the year to October.
The top 5 communities for highest volume of villa sales above AED10 million were Dubai Hills Estate (47 deals), the Palm Jumeirah (43), MBR City (32), Emirates Hills (22) and Jumeirah Golf Estates (13).

“Dubai Hills Estate has fared well across all price points and has been a popular community for both investors and end-users. The amenities, outdoor spaces, new shopping mall and nice mix of office and retail has been very attractive for buyers,” said Lynnette Abad, director of Data and Research, Property Finder.