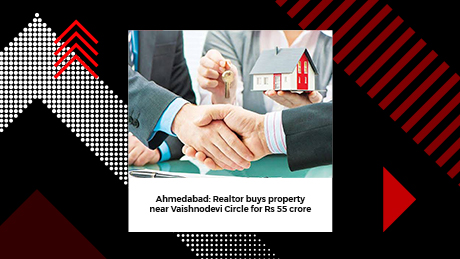 The property can be used build a corporate house, hotel, hospital, student housing, or retail-cum-commercial facility.

After a long lull, Ahmedabad’s real estate market has finally seen some activity. A city realtor has struck a deal to purchase an under-construction commercial property near Vaishnodevi Circle in Ahmedabad for an estimated Rs 55 crore, said market sources.

The under-construction asset was controlled by a non-banking finance company (NBFC) of Aditya Birla group and it has been bought from the NBFC. Located close to SP Ring Road and SG Highway, the property was previously being built as corporate headquarters by Sintex Industries Limited. However, construction has remained stalled for quite some time now.

According to sources, the deal is almost done but the final paperwork and some terms are currently being settled. “The buyer firm has a very specific project that it wants to develop at the site,” said a source privy to the development. “However, the developer is at an advanced stage of negotiation as some terms have been agreed upon and a few others are still being worked out.”

JLL India, a property consultant, was mandated to sell the property, said people in the know. According to the consultant, total land (freehold) of the concerned premises is 7,084 square metres and the built-up area is 4,20,886 sq ft.

The property can be used build a corporate house, hotel, hospital, student housing, or retail-cum-commercial facility. Large industrial groups such as Zydus Cadila and Adani group have established their corporate houses near the Vaishnodevi Circle.

Reports by a real estate consultant, Cushman and Wakefield, show that the Ahmedabad office market recorded a net absorption of 282,985 sq ft for the quarter ended September 30. The absorption was significantly higher compared to the previous quarter. The availability of quality supply through new completions in recent quarters has resulted in improved occupier traction.

However, there were no significant transactions in the retail space during the third quarter of the current calendar year.