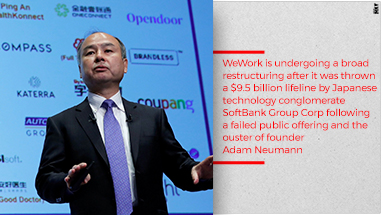 The company last month said it would lay off around 2,400 employees globally, almost 20% of its workforce, to cut costs.

WeWork China has set out ambitious revenue goals for 2020 even though it faces staff cutbacks and weak occupancy numbers at its properties across China, sources familiar with the matter said, citing targets announced by the division’s general manager at an internal meeting in Shanghai on Wednesday.

Alan Ai told employees at the meeting that the firm has set a goal to bring in non-core revenue of around $30 million in the year 2020 and for non-core revenue to account for more than 6% of its total takings in the country, the sources said.

That would represent a significant increase in the revenue generated from technology services and other products for tenants and shows one of the ways the office-leasing company hopes to turn around its business.

WeWork is undergoing a broad restructuring after it was thrown a $9.5 billion lifeline by Japanese technology conglomerate SoftBank Group Corp following a failed public offering and the ouster of founder Adam Neumann.

The company last month said it would lay off around 2,400 employees globally, almost 20% of its workforce, to cut costs.

WeWork owns 59% of WeWork China, whose other investors include Softbank, Hony Capital and Trustbridge, according to the group’s prospectus for its initial public offering.

The China division has been a sore spot for the company, burdened with low occupancy rates and intense competition from local players. In 2018, WeWork China generated $99.5 million in revenue, according to WeWork’s IPO prospectus.

The revenue targets for the China division disclosed at the staff meeting suggest that the company could be looking to achieve as much as $500 million in revenue from China next year, should non-core revenue account for a 6% share, according to Reuters calculations.

Ai did not discuss at the meeting how the company planned to achieve its non-core revenue targets, one source said.

The company currently rents out office space in 120 buildings in 10 cities across China, according to its website. In addition to major cities like Beijing, Shanghai and Hong Kong, it also has facilities in Shenzhen, Guangzhou, Xi’an, Wuhan, and other smaller markets.

Occupancy rates for China were “around 60%” at the end of September, according to internal company data seen by Reuters. Smaller cities, classified as “new markets”, had an average occupancy rate of 43%, while some cities like Wuhan and Xi’an had occupancy rates around 25%.

Ai also said during the meeting that layoffs were over in China and next year would be better, one source said. Ai did not disclose how the cuts had affected its Chinese staff, but sources have estimated that at least 100 people had left internal company messaging groups in the past two weeks.

The non-core revenue target also marks a move to tilt revenues away from rents and towards technology and other services. As of the middle of this year, non-core revenue, which consists of “technology” and “business services,” as well as paid events and WeWork Go, accounted for less than 1% of the total revenue of WeWork China, according to one separate source.

WeWork Go offers a pay-as-you-go service for individuals who want to use WeWork office space without paying monthly fees.