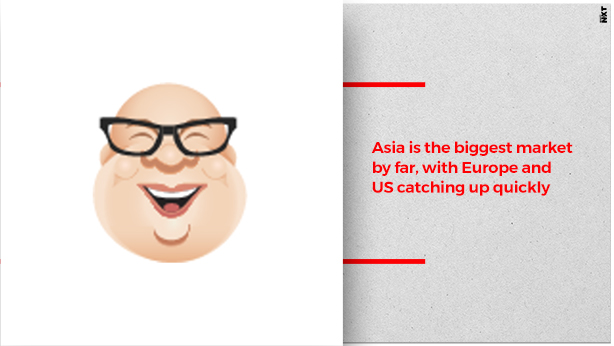 Close to 3 Million people living in coliving facilities globally. Asia is the biggest market by far, with Europe and the US catching up quickly

The coliving market globally is now worth close to $7.5 Billion (Up from
$6.3 Billion in 2018) with close to 3 Million people living in organized coliving setups across the world, said a report published by TheHouseMonk. China is the breakaway global leader with more than 2.5 million people staying in coliving facilities and about $6.7 Billion being paid to coliving companies as rent in 2019. India is the 2nd largest market by a number of colivers with 130,000 people who are paying a collective rent of $270 million.

Across Europe and the US, the coliving movement has steadily been gaining momentum. Close to 15,000 people are living in coliving facilities in Europe and about 10,000 people in the US, with market sizes being estimated at about $250 Million and $210 Million respectively. (See chart below)

“As the coliving industry evolves, we are noticing the foray of real estate developers into space. We have seen the entry of several such players either as asset owners or operators. We expect this trend to grow further in the next couple of years”, said Ajay Kumar, Founder, and CEO, TheHouseMonk.

He added, “In India, South East Asia and Europe, we are also noticing the entry of hospitality majors (Both hotels and hostels) into the coliving industry. Overall, it is an exciting time to be in this industry.”

The report highlighted differences in colivings in different geographies. While sharing of rooms by 2 or more people is the norm in India and China, this is not a culture that is noticeable in western part of the world where people want to have their own space. As a consequence of this cultural change, as well as purchase power parity between different geographies, the avg annual rent paid by a coliver in the US and Europe is almost 10x the rent paid in Asia (See chart below).

Another key difference between is that in Asia, coliving operators have chosen to work with existing real estate that is available to them and choosing to repurpose them into colivings whereas in Europe, many operators have opted to work with developers to custom build projects specifically for coliving. While Purpose Built Coliving (PBCL) projects offer better returns for investors and better margins for operators, it takes time to get a project up and running. Close to 25,000 coliving rooms are currently under construction in Europe and is expected to hit the market over the next 3 years.

While the growth rates might be strong across multiple geographies, there are multiple challenges that are affecting the growth of the industry. A few have been outlined below :

What to expect next from the coliving industry?

With increased urbanization and mobilization of people across the world, coliving presents a great option for tenants to live amongst a great community of people in a cost-effective manner. While the start of the coliving today is focused on Gen Z and Millennial population, we can expect more inclusive coliving models with housing options for families and senior citizens as well.

Coliving is also centered around metropoles at the moment. Over the next few years, we should see the evolution of coliving in regions like Australia, New Zealand, Middle East, and Latin America. Existing operators would possibly scale their offerings deeper into cities where they are currently operational.

ALSO READ : RealtyNXT sat down with TheHouseMonk’s Founder and MD Balaji Varadharajan for an exclusive conversation