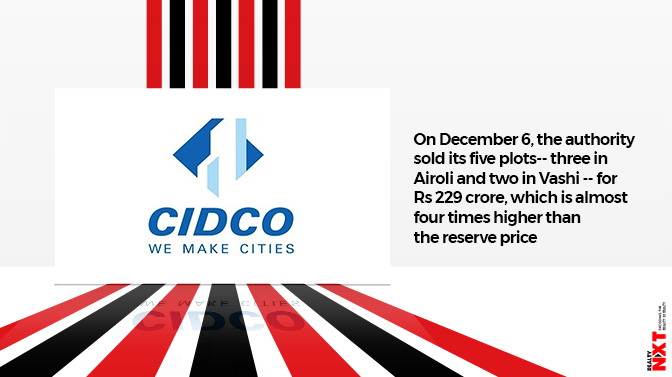 The authority on Tuesday netted another Rs 157 crore from the remaining five plots, which was more than double the base price.

At a time when the real estate sector is passing through difficult times, Cidco has managed to garner Rs 386 crore from selling 10 plots in Navi Mumbai within a few days.

The City and Industrial Development Corporation (Cidco), which is the planning body for Navi Mumbai, had put on block 10 plots across Airoli, Vashi, Kharghar and New Panvel (West) for residential and commercial development.

On December 6, the authority sold its five plots– three in Airoli and two in Vashi — for Rs 229 crore, which is almost four times higher than the reserve price.

The authority on Tuesday netted another Rs 157 crore from the remaining five plots, which was more than double the base price.

It may be noted that the Mumbai Metropolitan Region Development Authority, which too is sitting on a huge land bank in the plush BKC area, has not been able to sell its plots for the past many years due to poor market.

In the first auction, the Ahmedabad-based Shreenathji Organisers was the highest bidder for two plots, while the remaining three were bagged by Pacific Properties, Avenue Supermarts, and Narayani Trexim.