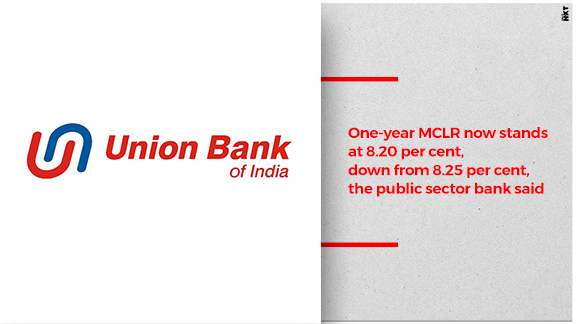 Union Bank of India on Tuesday said it has cut one-year MCLR rate to 8.20 percent, down 0.05 percentage point. Union Bank of India has reduced the marginal cost of funds-based lending rate (MCLR) by 5-10 basis points (bps) across all tenors, it said in a release.

One-year MCLR now stands at 8.20 percent, down from 8.25 percent, the public sector bank said. Overnight MCLR has been reduced by 10 bps to 7.75 percent.

The one-month to six-month tenor MCLRs have been cut in the range of 7.80 to 8.05 percent, it said. Revised MCLR rates will be effective from December 11, the bank said.

The Reserve Bank in its bi-monthly monetary policy review last week had kept the key repo rate unchanged at 5.15 percent.

Following this, several public sector banks including the largest lender SBI, followed by Bank of Baroda, Bank of India, among others, announced a reduction in MCLR which will bring down the cost of loans such as auto and home for consumers.

One-year MCLR is the benchmark to price most of the consumer loans.