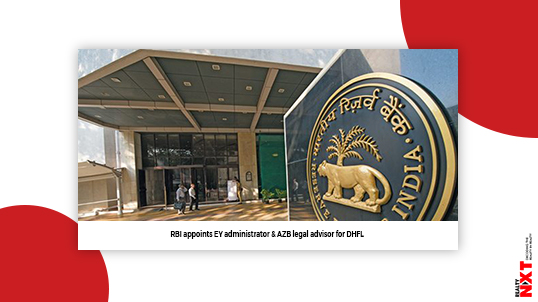 This comes after the RBI suspended the board of DHFL and appointed a committee to help recover Rs 84,000 crore that the company owed to different lenders.

This comes after the RBI suspended the board of DHFL and appointed a committee to help recover Rs 84,000 crore that the company owed to different lenders.

“This (DHFL) is RBI induced insolvency and the committee will review and evaluate all the options on the table like turning around the company or finding new buyers. EY and AZB will work with the committee,” said a person with direct knowledge of the matter.

The RBI had in November brought changes in laws to supersede the board of DHFL, announced to resolve the issue under the provisions of the bankruptcy code and appointed R Subramaniakumar as the administrator. He is being assisted by the committee that includes Rajiv Lall, Non-Executive Chairman, IDFC First Bank Ltd, N S Kannan, Managing Director and CEO, ICICI Prudential Life Insurance, and NS Venkatesh, Chief Executive, Association of Mutual Funds in India.

RBI is also looking at claims management of fixed deposit holders in DHFL, said people in the know. The FD holders were asked to submit their claims to the insolvency professional by December 17. DHFL has public deposits of around Rs 6,000 crore.

DHFL is in the process of finding a resolution after a recent proposal of lenders was rejected by the RBI. ET was first to report on October 19 that the RBI had rejected a proposal by banks that would have allowed them provisioning relief to the tune of Rs 6,000 crore on borrowings by DHFL. Most banks will have to now take this into account for the December quarter.

State Bank of India has an exposure of about Rs 10,000 crore to DHFL. Other state-owned lenders to DHFL include Bank of India, Canara Bank, and Punjab National Bank. Union Bank of India leads the consortium of lenders while the steering committee includes SBI, Syndicate Bank and Canara Bank.

There is an impasse over the resolution plan for the mortgage lender as several mutual funds are refusing to sign the inter-creditor agreement. While nonbanking lenders have taken a hit on advances to DHFL, banks have yet to designate such credit as nonperforming assets. NPAs require additional provisions, denting lenders’ profit margins.