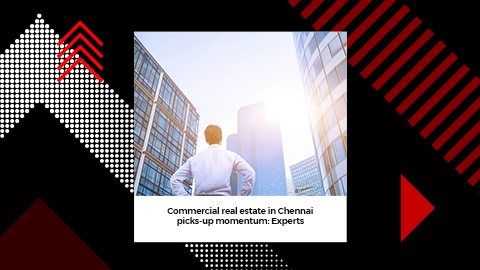 Chennai has traditionally been a market that absorbs around 45 lakh square feet of office space. The city suddenly witnessed a spike in offtake.

After then 6 years, real estate activity has picked up momentum in Chennai, taking the overall absorption of commercial space to nearly 60 lakh square feet. The hectic activity in real estate is because traditional businesses have increased their footprint in the city.

From software services to co-working spaces and the resurrection of electronics manufacturing services (Foxconn, Salcomp), all have contributed to pushing up real estate activity. Rentals to have witnessed a 10 to 15% rise and the bullishness could continue for the next 2-3 years, experts said.

Chennai has traditionally been a market that absorbs around 45 lakh square feet of office space. The city suddenly witnessed a spike in offtake. “The underlying sentiment has turned bullish,” said Srinivas Anikapatti, senior director at real estate consultancy Knight Frank. “This year has been very good after the damp squib in 2017 and 2018,” he said.

“This is the best since 2012-13 and this year has been extremely good for the city. This has happened on the back of robust demand and the indications are that 2020 will also be a good year,” said Kanchana Krishnan, senior director for Chennai at property consultants JLL India.

The new darlings in the real estate horizon, co-working spaces, have lapped up substantial spaces in business hubs. For example, Workafella signed up 1.42 lakh square feet in Teynampet. The growth in this segment could give a leg-up to start-ups in the city.

“The city traditionally was short on the supply of good quality office space. But quality office space is now available,” Anikapatti said. Along with the new developments, opportunities for rentals across various price points starting from `45 per square foot to `110 per square foot is now available — a feature which had earlier weaned away investments from Chennai to Bengaluru and Hyderabad.

“We are witnessing the first years of a boom cycle returning. We estimate the market will be good for the next 3 years at least as there is significant interest from the industrial segment,” said Rajesh Babu, director, Asset Advise, real estate consultants.

The drivers of the boom are the city’s traditional vanguards, IT & ITES, captive centers for large transnationals, co-working spaces and the re-churn driven by Foxconn, Salcomp and other smartphone makers.