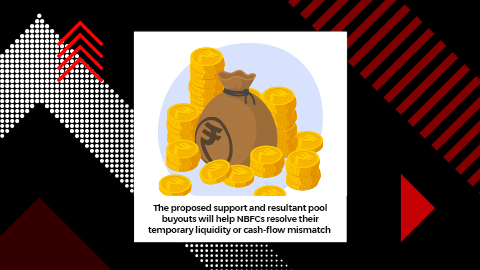 “The window for one-time partial credit guarantee offered by the GoI (Government of India) will remain open till 30 June 2020, or till such date by which Rs 1 trillion assets get purchased by the banks, whichever is earlier,” said the government in a statement issued after the meeting. It added, “Power has been delegated to the finance minister to extend the validity of the scheme by up to three months, taking into account its progress.”

“The liquidity crisis which impacted the economy in general and real estate, in particular, might get slightly mitigated as a result of the Union Cabinet approving the ‘Partial Credit Guarantee Scheme’ for purchase of high-rated pooled assets from financially sound NBFCs/HFCs by PSBs. Subject to the norms prescribed, as also the quantum allocated, the proposed Government Guarantee support and resultant pool buyouts should positively impact the economy as also real estate in the sense that it will help NBFCs/HFCs resolve their temporary liquidity and/or cash flow mismatch issues, and enable them to continue contributing to credit creation and providing lending to borrowers. This should provide some respite for the economy in general, and real estate in particular,” said Dr. Niranjan Hiranandani, National President, NAREDCO; President-Designate, ASSOCHAM; and co-founder and MD, Hiranandani Group

“The Union Cabinet’s move is aimed at providing relief to NBFCs /Housing Finance Companies (HFCs) and will play an important role in resolving the issues related to liquidity crunch and cash-flow mismatch issues, especially for financially solvent NBFC’s. The move will provide liquidity to such companies and also protect the economy from any spiral effect that may arise due to the failure of such companies. The industry is hopeful that such measures will help in providing a stimulus to the RE sector and to the economy by enhancing credit flow,” said Anshuman Magazine, Chairman & CEO – India, South East Asia, Middle East & Africa at CBRE.

“It is a welcome move by the Ministry of Finance to spur growth in the stagnant markets across the sectors. The dearth of monetary inflow was the major inhibitor for the real estate sector. The proposed ‘Partial Credit Guarantee Scheme’ coupled with a 135 bps rate cut by RBI will play as a catalyst to mobilize the cash flow in the NBFCs and shadow banking system. It will further enable Housing Finance Companies in credit creation to resolve the tight liquidity condition that the real estate sector has been facing at large,” said Mr. Rohit Poddar, Joint Secretary, NAREDCO Maharashtra, and Managing Director, Poddar Housing and Development Ltd on ‘Partial Credit Guarantee Scheme’ announced by the Ministry of Finance.

The scheme was first launched in August, in which the government said it will provide one time six months’ partial credit guarantee to public sector banks for the first loss up to 10 percent.