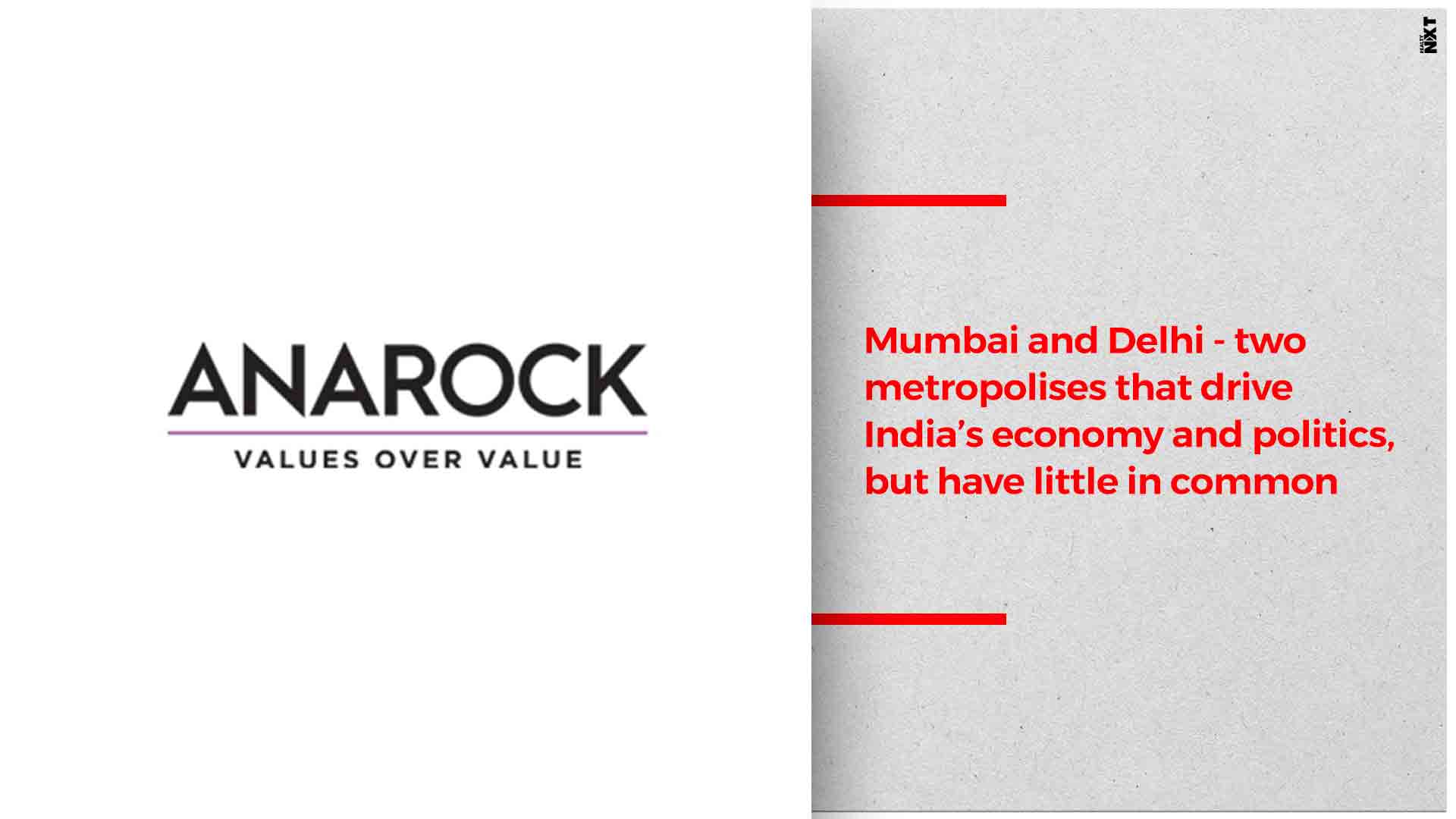 The nation’s financial capital or the seat of power and politics – Delhi or Mumbai. Which is the better city to live, travel or invest in? There is no easy answer

Mumbai and Delhi – two metropolises that drive India’s economy and politics, but have little in common. There are several differences in the real estate profiles of NCR (National Capital Region) and Mumbai Metropolitan Region (MMR) that are as distinct as the cities themselves.

While Mumbai scores high on strong economics and lower crime and pollution readings, it remains India’s most expensive city in terms of real estate. Delhi has better infrastructure and ample land availability for further expansion. To compare and contrast the liveability quotient of NCR and MMR, one needs to cut through various numbers and parameters.

The financial capital of the country, Mumbai is an economic powerhouse, industrial hub and also the seat of Bollywood, arguably India’s dominant film industry. From the banking and financial sector to gem and jewellery industry, and from the automobile and IT-ITeS industries, Mumbai has several important economic drivers.

According to a 2018 report by New World Health, Mumbai is 12th-wealthiest global city with total private wealth of US$ 950 billion. On the other hand, NCR’s economy is primarily led by businesses, public administration, agriculture and processed foods, real estate and IT-ITeS. As per the Economic Survey Report, Delhi’s economy grew 8.61% in 2018-19 and is likely to attain the Gross State Domestic product (GSDP) of INR 7,79,652 Crore.

Delhi’s satellite towns of Gurgaon and Noida are major corporate and IT hubs and have contributed to the entire region’s development. While both cities power ahead on the back of strong economic activity, MMR scores higher by virtue of being a traditional financial centre and hosting more companies and industries.

With its rich cultural heritage, plethora of Mughal monuments and colonial architecture, Delhi attracts tourists from far and wide. The city is part of a ‘golden triangle’ connecting it with Jaipur and Agra, and is on the itinerary of virtually every foreign tourist. With Delhi drawing tourists in large numbers, the hospitality industry there is always on a roll.

From five-star luxury to quaint boutique hotels and bed & breakfast options, NCR is brimming with choices for tourists with almost any budget. However, the high crime rate and ‘unsafe’ tag does hinder progress of Delhi’s hospitality sector.

Mumbai also offers several tourist attractions and gives visitors a true taste of cosmopolitan living. From religious monuments, beaches, film sets and mind-boggling slums made infamous by global reportage, Maximum City is a kaleidoscope of varied and unique experiences. In fact, the state government has allocated a budget of INR 676 Cr for the first-ever tourism development plan to develop more tourist attractions in Mumbai.

The high incidence of serious crimes has earned Delhi the unenviable tag of the crime capital of the nation. The city is widely perceived as unsafe, especially by women.  According to data released by National Crime Records Bureau, Delhi witnessed 1,050 IPC crime incidents per lakh of the city’s population – four times the national average of 238.

Meanwhile, rising pollution levels in NCR continue to dominate headlines and bring down the liveability quotient of the city. Poor air quality may not directly impact the city’s real estate market, but it has certainly prompted home buyers to seek properties in lesser polluted areas with more open spaces.

While crime and air pollution are also problematic in Mumbai, they are low enough not to hamper the day-to-day life of the city’s residents.

A city’s liveability is rightly measured by the infrastructure it provides to its citizens, and real estate growth is also driven largely by the development of proper roads and transport systems. In this regard, Delhi clearly trumps over Mumbai and has steadily evolved its infrastructure over the last few years.

The daily commute has been eased for lakhs of citizens via wide roads such as Noida-Greater Noida Expressway, Yamuna Expressway and Delhi-Meerut Expressway. With an operational network of 389 km, Delhi Metro covers all major parts of NCR and reaches Gurgaon, Noida, Greater Noida and Faridabad.

On the other hand, infrastructure growth in MMR has been patchy and not kept pace with the city’s population growth. Traffic snarls and congestions are commonplace as Mumbai’s road network is unable to accommodate its burgeoning vehicular traffic. While millions still depend largely on the robust suburban railway network, other modes of rapid transit such as Monorail and Metro still cover only a small section of Maximum City.

To understand NCR and MMR’s real estate performance, one needs to delve into recent housing data and its analysis. In supply terms, both cities have witnessed a sharp decline in the number of new housing launches. NCR added approximately 5,790 units in Q3 2019 against 13,570 units in Q2 2019 – a massive decrease of 57%.

MMR fared better in comparison and saw the launch of around 14,040 units – a decline of nearly 39% q-o-q and 29% y-o-y. Interestingly, the affordable category dominated supply in both cities, contributing 64% to overall launches in NCR and 40% in MMR.

Another barometer to compare the real estate performance of both cities is absorption and NCR and MMR have both borne the brunt of the overall economic slowdown. External factors like the ban on subvention schemes and poor market sentiments impacted housing sales in both cities, but MMR performed relatively better.

Interestingly, on a yearly basis, MMR saw the least decline amongst all top 7 cities at 6%, while NCR recorded a 13% annual decline.

One of the biggest differences in the real estate offerings of both cities is in pricing and affordability. Capital values of property show a stark difference in both cities. While the average base selling price per sq. ft. in NCR is pegged at INR 4,565 per sq. ft., this is more than double in MMR at INR 10,610 per sq. ft.

In fact, Mumbai continues to be the most expensive market in the country where even a hefty budget of INR 2 Crore is not sufficient to buy a spacious house in upscale neighbourhoods like Bandra and Andheri.

This budget can get you a two or three-bedroom apartment in many parts of NCR such as Noida, Indirapuram, Dwarka Expressway and Gurgaon. Scarcity of land continues to plague Mumbai where real estate development has, by necessity, only been vertical. Moreover, the city is hemmed in by the sea from three sides and can only grow northwards. Delhi faces no such issues and the NCR region – and its real estate – continue to expand and grow in a radial pattern.

Towards More Transparency and Affordability

For many years, NCR’s real estate market was traditionally more investor-driven than MMR, where end-users dominated. In the recently regulated environment under RERA (the Real Estate Regulation Authority) speculators have taken a backseat in both markets. Both markets are becoming more transparent. Both cities are also working on better infrastructure and road networks.

Going forward, prices in both cities are likely to remain range-bound until the unsold inventory declines significantly and the overall sentiments improve. While there may be no clear winner in the Delhi vs Mumbai debate, most properties in NCR are more affordable and MMR provides a safer environment for its residents.

ALSO READ: Housing sales may rise marginally by 4% in 2019: Report