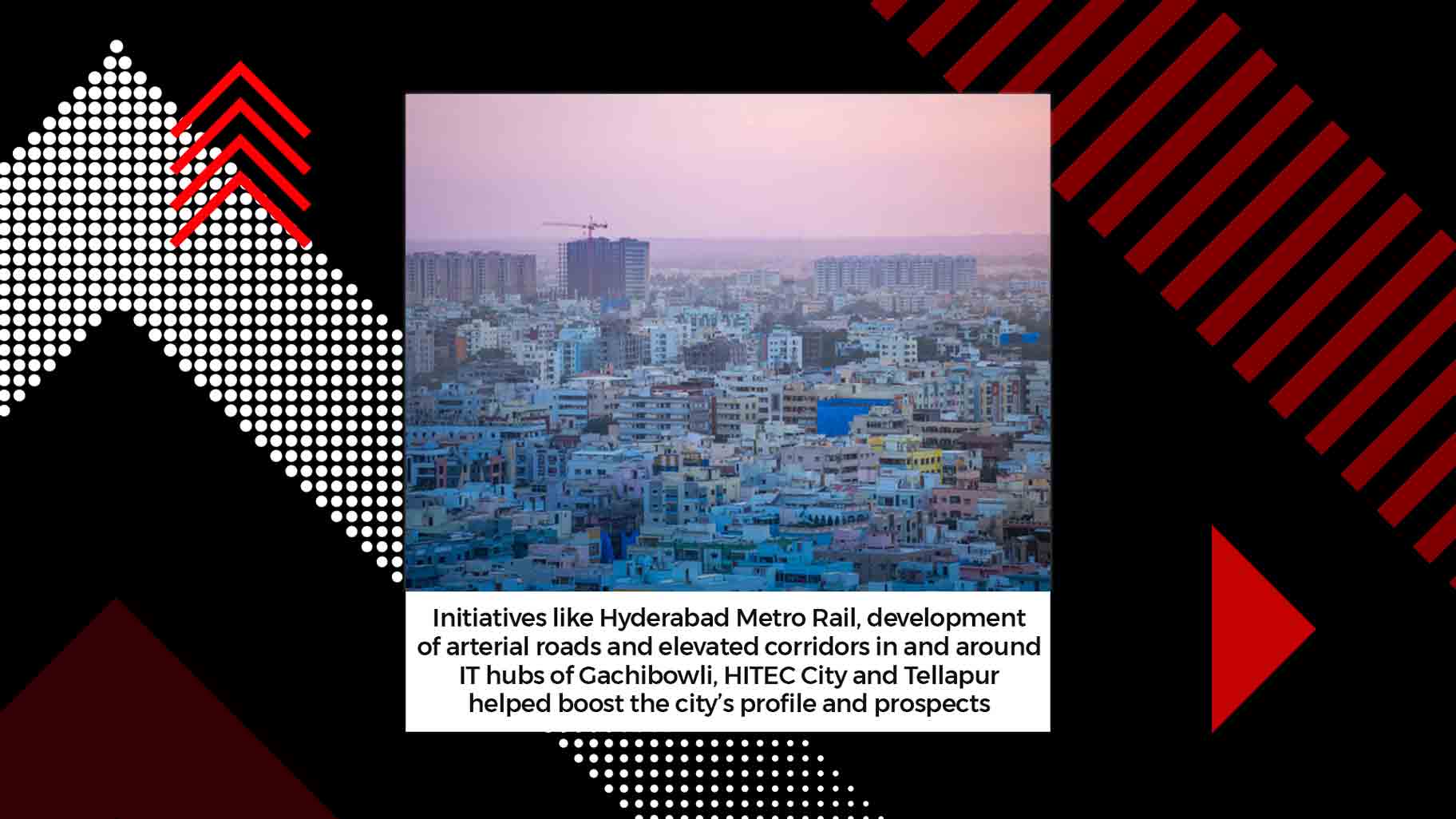 The liquidity crunch, slow sales and poor investor demand put a dent in almost every city’s performance. However, Hyderabad was a notable exception.

2019 was ‘nothing to write home about’ when it came to the Indian housing sector’s performance. The liquidity crunch, slow sales and poor investor demand put a dent in almost every city’s performance. However, Hyderabad was a notable exception.

Real estate in this city stayed afloat due to a stable political fabric, constant inward migration of working professionals and enhanced infrastructure, among others. Initiatives like Hyderabad Metro Rail, development of arterial roads and elevated corridors in and around IT hubs of Gachibowli, HITEC City and Tellapur helped boost the city’s profile and prospects.

Also, the creation of new districts in its vicinity – like Shamshabad, Bhuvanagiri, Yadadari and Vikarabad – created fresh avenues for overall real estate growth.

Commercial Leasing on a High

Increased office leasing activity in recent times has positioned Hyderabad as one of the most active commercial markets in the South. Compared to its neighbour Bangalore, the city may have been later bloomer when it comes to commercial development. However, it has now emerged as a major office hub on the back of proactive governance, robust infrastructure, ease of doing business and quick project approvals.

In the first three quarters of 2019, Hyderabad saw net office space absorption of close to 6 mn sq. ft. Comparatively low rentals for Grade A office space gives the city an edge over the other southern office hubs of Chennai and Bangalore. With the likes of Amazon and Apple leasing big spaces in Hyderabad, the city is giving Bengaluru stiff competition and may soon catch up with it.

Hyderabad has performed moderately well in the residential market as well and is witnessing increased activity due to its affordable property prices. Moreover, builders have restricted their new supply in the market, choosing to focus instead on clearing their previous unsold stock.

Hyderabad saw its unsold housing stock decline by an impressive 12% annually in Q3 2019. Hyderabad’s unsold stock stood at just 23,900 units – the lowest among the top 7 cities. The city saw total housing sales of nearly 13,110 units between January to September 2019, declining marginally by 4% against the corresponding period in 2018 when it stood at 13,640 units.

The IT corridor stretching from Madhapur to Gachibowli and the Financial District in western Hyderabad have dominated Hyderabad’s real estate scene. However, relentless development over the last decade or so led to saturation in these areas, with no major land banks left for further development.

To attract IT firms towards the eastern parts of the city, the government came up with its ‘Look East’ policy. Areas from Uppal to Bhuvanagiri and Warangal Highway will now receive a fillip as the government intends to promote IT development there. Apart from power subsidy and recruitment grants, it will offer IT companies – especially start-ups – a rental subsidy of 25% for the first few years of operation.

The eastern part of Hyderabad has huge tracts of land available for development, and its proximity to Outer Ring Road also equals excellent connectivity. The Metro connection from Nagole to HITEC City is also set to augment real estate growth in this upcoming region.

Compared to other metros, land prices in Hyderabad are relatively affordable and quite within the reach of many buyers, especially in many of the peripheral areas of the city. Buying a plot is also emerging as the preferred investment option considering its high resale value as compared to other residential properties.

Several localities, mostly in the affordable and peripheral areas of Hyderabad, are emerging as land investment hubs. These include Shankarpally, Srisailam Highway, Adibatla, Shameerpet and the Warangal Highway. The average land values in these localities is as low as INR 400 per sq. ft. and goes all the way up to INR 2,200 per sq. ft.

Plotted developments in Hyderabad are likely to benefit from mega initiatives such as Pharma City and Yadadri Development Plan. Pharma City coming up on 19,000 acres inMucherla will attract many global and domestic pharmaceutical companies and provide employment to lakhs of professionals. The development of Yadadri Temple City coming up in Yadagiri Gutta will entail construction of new roads, buildings and other facilities for visiting devotees. The government also plans to add 280 km of roads to the ORR to plug the missing links on this buzzing growth corridor.

Putting a spanner in the wheel of Hyderabad’s real estate growth is the lack of regulation. RERA has still not taken complete hold in Telangana compared to other states like Maharashtra, Gujarat, Karnataka and Uttar Pradesh, which took the lead in RERA compliance.

As on 13th December 2019, nearly 1,445 projects have been registered in Telangana while its immediate neighbour Karnataka has seen more than double (3,067) project registrations. Despite repeated deadlines given to register projects, a large section of developers has not yet registered their projects with the state RERA. Developers are being let off with a penalty of just Rs 3 lakh for late registration.

In the absence of a strict monitoring system and stringent measures by the authority, many projects are still being sold without registration.

Next, the issue of fixing FSI has also been long pending and needs to be addressed urgently. Unlike other major cities that offer FSI between 2 to 2.5, Hyderabad offers unlimited FSI – allowing developers to construct as per their choice.

Predictably, this is exerting pressure on the city’s existing infrastructure. Areas such as HITEC City and Madhapur, which have seen a lot of construction and real estate activity, are facing issues like depletion of groundwater levels, traffic congestion and air pollution. If construction is left unchecked and unregulated, Hyderabad’s real estate image could take a hit.

In 2019, new launches across cities including Hyderabad remained limited, and this trend will continue in the coming quarters unless the liquidity crisis eases suddenly and developers have better access to funding. Considering the present scenario, Hyderabad’s housing sales could see 6-10% jump over the next one year, while new launches are likely to remain muted.

The office market will continue to go from strength to strength with large-scale projects coming up in Madhapur and Gachibowli.  In retail, 12 new malls spreading over 6.5 mn sq. ft. are likely to come up in HITEC City, Secunderabad, Begumpet and Miapur by 2021-end.