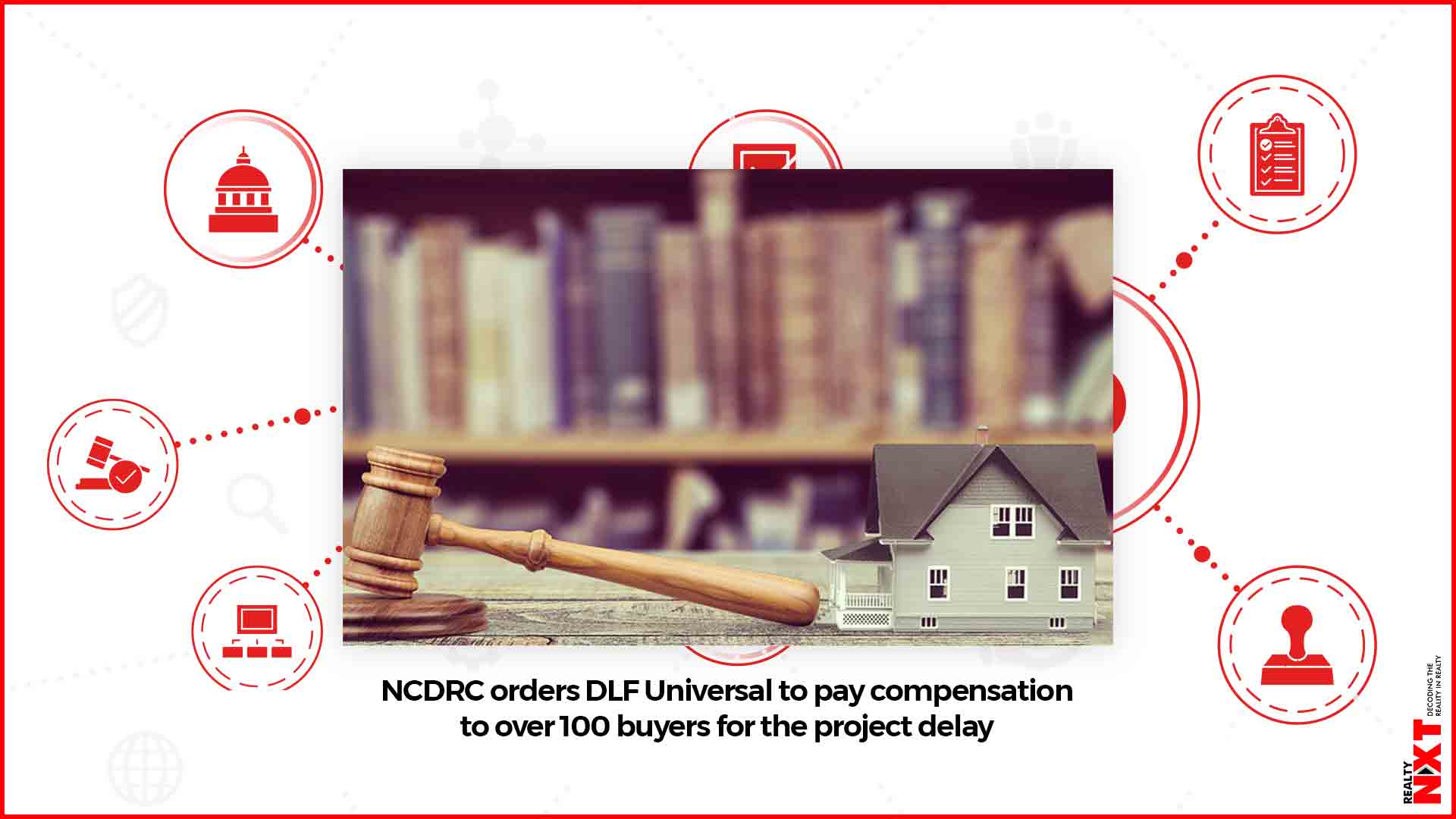 The National Consumer Dispute Rederessal Commission (NCDRC) has ordered DLF Universal to pay DLF Capital Greens’ home buyers compensation at 7% per annum from the expected date for delivery of possession till the date on which the possession was actually offered to them.

The builder had constructed 2,870 apartments in 23 residential towers in three phases. Laresen & Toubro was appointed as the principal contractor of the project.

The project was to be completed within a period of thirty six months from the date of the application. The developer however claimed that there had been delay in getting the approvals from the competent authorities as a result the time period for completion of the construction was revised to 52 months. It intimated the allottees to either accept delay of sixteen months or to exit from the project by taking refund with simple interest at 9% per annum.

The home buyers pleaded that the builder-buyer agreements were unilaterally prepared by the developer and since the earnest money paid by them, along with other charges could be forfeited in the event they refused to execute the agreement as drafted by the developer they had no option except to sign on the dotted lines.

They have also disputed the amount collected by the developer alleging increase in super area of the apartment. The complainants also sought refund of the charges recovered from the allottees for providing car parking and club facility and service tax. They are also demanding timely payment rebate and early payment rebate to all the apartment owners.

Some of the home buyers represented by advocate Aditya Parolia of PSP Legal pleaded that the club as well as the parking areas, whether open or covered, form part of the common areas and services hence the developer cannot charge separately for their use.

The developer on the other hand said that the said areas are not included in common areas and facilities and therefore, it was entitled to charge separately for the said facilities.

NCDRC held that “It is true that nothing in law prevented the developer form charging the cost of the club area and basement parking from the allottees, who were to pay on the basis of the super area which included not only the apartment area but also the common area of the building. But, having not done that, the developer cannot be allowed to charge separately from the allottees for the club area and the basements used for car parking.”

The court also held that the allottees are entitled to early/timely rebate only if they have complied with the terms on which such rebates were offered. However, the allottees shall also be entitled to such rebate wherever the benefit of the rebate has been extended to them either by the developer itself or by this commission.

The car parking and club charges wherever already paid to the developer shall be refunded to the concerned allottee within three months, failing which the said charges shall carry interest at 9% per annum from the date of this order, till the date of refund.

The court also ordered the builder to execute the conveyance deed in favour of the allottees within three months. The developer having received the sale consideration has nothing to lose by holding possession of the allotted flat except that it would be required to maintain the apartment. Therefore, the holding charges will not be payable to the developer, said the court.

The builder further pleaded that at the time of booking itself the allottees were informed that the plans had not yet been sanctioned and the schedule for delivering possession of the apartments was tentative.

As regards Phase-III, it is stated that the approval came in February 2013, though it was applied in January 2011. The company said that in view of the aforesaid delays, the allottees of Phase-II & Phase-III were given option of exiting from the project, by taking refund with 9% interest.

The court however held that the builder is entitled to the additional demand on account of increase in the
super area of the apartments.

As far as maintenance charges are concerned, the same should be paid by the allottee from the date the possession is offered to him unless he was prevented from taking possession solely on account of the builder insisting upon execution of the Indemnity-cum-Undertaking in the format prescribed by it for the purpose.

Six deaths at the project

A perusal of the prohibition letter dated May 26, 2014 issued by the Directorate of Industrial Safety & Health (Labour Department), Government of NCT of Delhi showed that there have been as many as six fatal accidents at the side of this project.

NCDRC however said the execution of such an undertaking would defeat the provisions of Section 23 and 28 of the Indian Contract Act, 1872 and therefore would be against public policy, besides being an unfair trade practice.

If the possession to an allottee has been delayed solely on account of his having not executed the ‘Indemnity-cum-Undertaking’, the compensation to such an allottee should be paid with effect from the expected date
for delivery of possession till the date on which the consumer complaint was actually instituted.