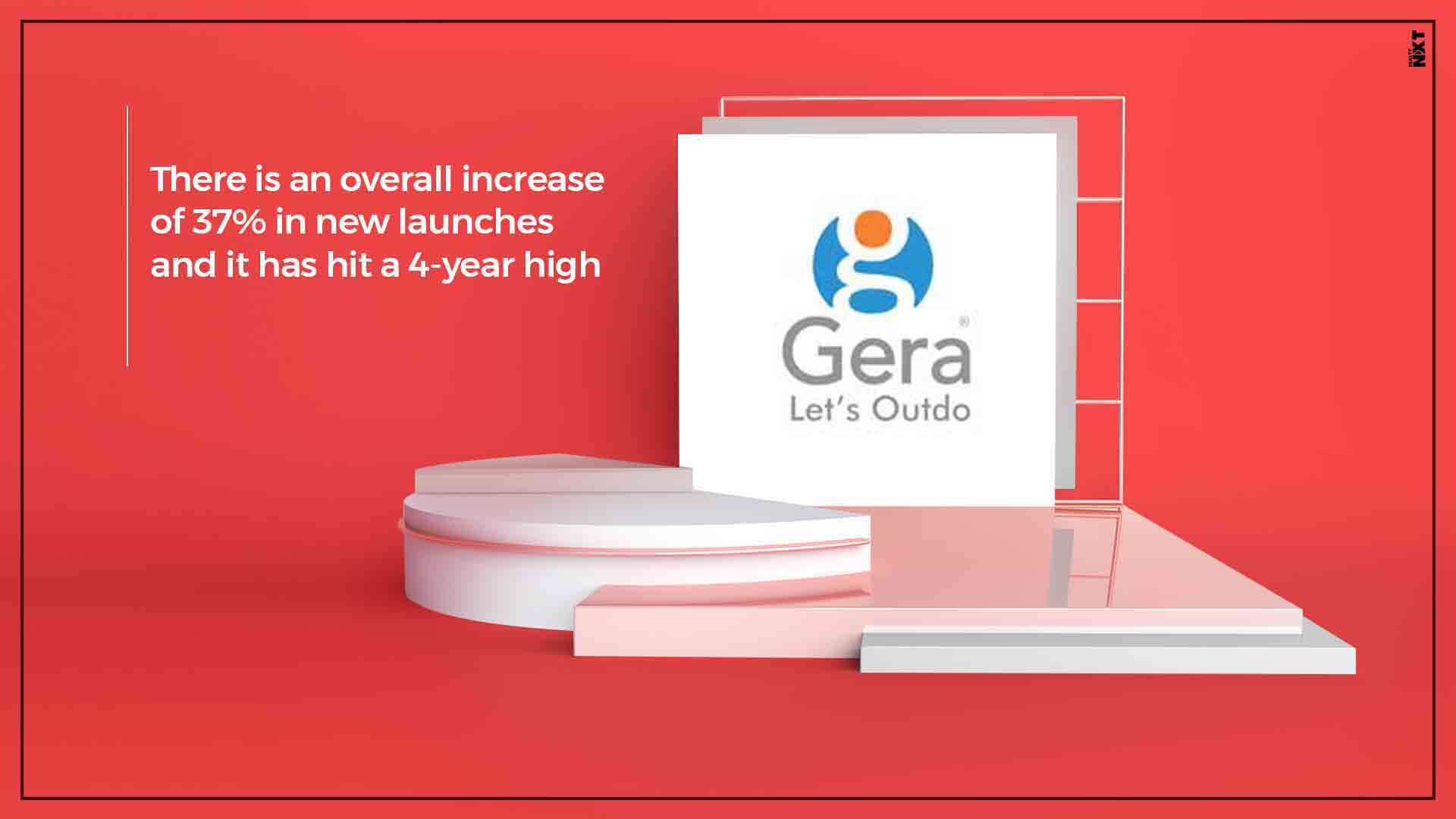 Key Highlights of the report:

Total units being built is at an all-time high

Total inventory is at an all-time high. The inventory for sale has also risen after falling since June ’17 indicating supply outstripping demand. The total number of units under development had reached a peak level of 327,670 units in Jun ’17. Since then, on account of a reduction in new project launches, the total inventory contracted for next 2 years and finally rebounded by ~3% to 301,731 units in Jun ’19 from 292,842 in Dec ’18. In Dec ’19 it grew further by ~12% to 336,186 units surpassing the peak in Jun ’17. This suggests that the market has accelerated in the last six months in terms of construction activity. From a peak inventory available for sale at 107,402 apartments in Jun ’16 the inventory available for sale currently stands at 89,887 apartments. Inventory available for sale grew by ~12% as well over Jun ’19 (when it was 80,062 units). However, inventory levels down by 16% from Jun ’16 peak.

Since the implementation of RERA, number of live projects in Pune has reduced from the peak of 3,733 projects in Jun ’17 to 3,490 in Dec ’19.  As of Dec ’19, the total number of projects on hold (where work has commenced and presently stopped) has reached 249 (the figure of 3,490 live projects excludes these 249 projects). These 249 projects consist of 40,023 apartments and based on our prior data, 23,466 apartments are sold. This means approximately ~24,000 families are stuck with incomplete projects at present.

New launches at a 4-year high

Looking at the data of new launches by segment, there is a significant increase in new inventory launched in the Premium Category. New inventory launched in the Premium category grew by ~140% (from 8,767 units launched in 2018 to 21,011 units launched in 2019). Launches in the Premium Plus and Luxury segment also witnessed healthy growth rates of 44.5% and 31.9%. The other significant part is that launches in the Budget segment declined by  ~10%. While maximum inventory launched is still in the Budget segment (31,324 units in 2019), clearly the demand has migrated to more aspirational segments like the Value segment which also witnessed a good growth rate of ~85%. This finding is corroborated clearly in demand data collected directly from potential customers who visited the CREDAI PUNE exhibition in Dec ’19.

As mentioned earlier, we have seen that there has been a significant increase in new supply in the Premium segment. This is possibly due to migration of demand to higher bedroom types. Data comparing demand and supply gap across the last 2 years clearly indicates where the supply is migrating in response to shifts in demand. In 2018, there was clearly an oversupply in the 1BHK product segment and a clear undersupply in the 2 BHK segment. The market recognizing this mismatch launched 2 BHK inventory leading to an oversupply in 2 BHK. The 2 BHK+ segment is now seeing undersupply where demand is ~27% and supply is ~15%.

We looked at 20 of the top developers in Pune in terms of brand name and repute. To ensure consistency and uniform comparison we maintained the same list of developers over the past 5 years. We then calculated what was their share in the yearly offtake of Pune. The data clearly indicates that over the past their share in sales has gotten stronger especially post RERA. These developers have very successfully managed to take away sales from other developers. Clearly, the reason why most developers are in bad shape is because they are unable to compete effectively with these top players.

Overall market prices have broadly remained flat over the last 6 months after witnessing an erosion of ~11% from peak levels seen in Dec ‘15. In Jun ’19 average market price was Rs 4,555 Psf which has gone down to Rs 4,530 Psf (a reduction of 0.54%). Average prices in the core market (projects which account for a majority of sales) have grown by 2.6% since Dec’18.

We looked at the trends in affordability over time and data indicates that affordability is at an all-time high as on Dec ’19 at 3.71x Annual Income making this the best time to buy a home. Over time interest rates and prices (from Jun’15 onwards) have trended down, while incomes have risen thereby increasing the affordability significantly.

Since Dec ’14, the consistent reduction in rates and the salary increments have led to a situation where the house cost is 3.71 times the salary. This makes affordability at an all-time high.

While overall offtake has increased by 15% in the last 12 months, the segment leading the growth in offtake is the Premium segment. With an overall volume growth of 34% in the last 12 months. The Budget + Value segment has displayed a growth of 32% in the same period. There certainly appears to be a trend towards premiumization in the Pune residential market. The Budget+Value segment occupy ~64% of the overall pie in sales volume. However, this percentage has been gradually reducing over time. In the 12 months ended Dec ’15, 72% of all units sold were in the Budget+Value segment while in Dec’19 this share has come down to 64%.

While releasing the report, Mr. Rohit Gera, Managing Director, Gera Developments said, “The stressful situation for a large number of developers is real, but it is due to customers moving en masse to quality developers and has little correlation with other narratives doing the rounds. The stress can be explained by looking at the minimum number of projects that it took to sell 10,000 homes over the last few years. In 2017, it took 40 projects with the highest sales per project to cumulatively sell 10,000 homes.  By 2019, that number has dropped to 17 projects. This means in 2017, the projects with the highest sales had an average sale of 250 homes in the year, however by 2019, this average has increased to 588 homes. Essentially this means while some developers have grown their market share and taken a larger share of the sales, what is left to sell is divided over more developers, thereby leaving many developers in a bad shape”

Mr. Gera further added that “Affordability has also increased substantially at 3.71 times annual income. This is certainly a strong increase in purchasing power. Customers, however, are no longer willing to buy homes from any developer.  Those with a track record, with high standards of governance and a strong view of customer needs, are finally getting rewarded by customers with buoyant sales and price premiums. The sector seems poised at a crossroad.  We have seen an increase in supply that is more than the demand.  If the union budget brings in any incentives for purchasing of homes through demand stimulation incentives, the industry could see a big change for the positive for many more developers.  If however this doesn’t happen, the prolonged stress can lead to many more fatalities along the way leading to further consolidation of the sector.”

In our view, we are seeing clear signs of greenshoots in terms of a price rise in projects in the core market (projects sized greater than 100 units). While the overall market (all projects put together) is flat in terms of prices it is doing excellent sales while launching new inventory. In our view the cycle turned in the recent 6-12 months. The offtake of the last 12 months is considerably greater than the current inventory available for sale. We are also seeing a migration of demand from lower bedroom types to higher bedroom types which is currently an under-served market.

This is one impact of affordability i.e. when your overall budget increases due to rising income & falling interest rates, customers seek a higher-grade apartment. We are seeing this trend playing out. Higher grade apartments are also associated with developers with a strong brand name and excellent track record who customers trust to deliver.

The Gera Pune Residential Realty Report is a bi-annual initiative by Gera Developments that is aimed at garnering insights on both the supply and demand sides of the residential realty market in Pune. This census-based study uses feet on street methodology of data gathering and covers the Pune Urban Agglomeration area. The data is then validated and statistically analysed. What started, as a knowledge gathering initiative in 2011 has now become something that realtors, IPCs, Research Houses, Brokerage Houses and Banks & Financial Institutions in Pune look forward to. Besides a broad overview on units’ construction, inventory available, off takes and prices, the report dives deeper to mine insights by price segment, sq. footage, construction stage and size of unit.

Gera Developments, one of the pioneers of the real estate business in Pune are recognized as the creators of premium residential and commercial projects in Pune, Goa & now Bangalore. Gera Developments’ pride themselves for providing long term enjoyment to their customers. Innovation has been a hallmark of the company and there are many ‘firsts’ that stand to Gera Developments’ credit. India’s first ChildCentric® Homes, 5-Year Warranty on Real Estate consisting of Preventive Maintenance & Repairs and providing Insurance of buildings was introduced by the company over 12 years ago for the first time in India and the same is now mandated by RERA. The company has now introduced the first 7-year warranty in Real Estate. The company is driven by quality, transparency and excellence. The projects are designed around the evolving needs of their customers. Some of the revolutionary and highly successful product lines have been ChildCentric® Homes, IntelliplexesTM, SkyVillasTM, The Imperium series amongst others.

The company’s philosophy is Let’s Outdo and yet again, they have created a breakthrough in innovation with launch of ChildCentric® Homes thereby creating a paradigm shift in the real estate for both, the developer as well as the home buyer. The company has established a new category of living spaces designed keeping the child of the home as well as the parent’s lifestyles in mind. Gera’s have set a new benchmark not only in real estate marketing and brand building but also setting new standards of service orientation in the realty sector.

The company has won several national and international awards for their concept-based landmark project ChildCentric® Homes recognizing it as a benchmark and a new category in the residential real estate industry. The company was recently felicitated as the “Real Estate Developer of the Year” by one of the most prominent media houses in the country. With its strong belief and brand promise GROW WITH GERA, Gera Developments ensures that there is a value add for all their key stakeholders.