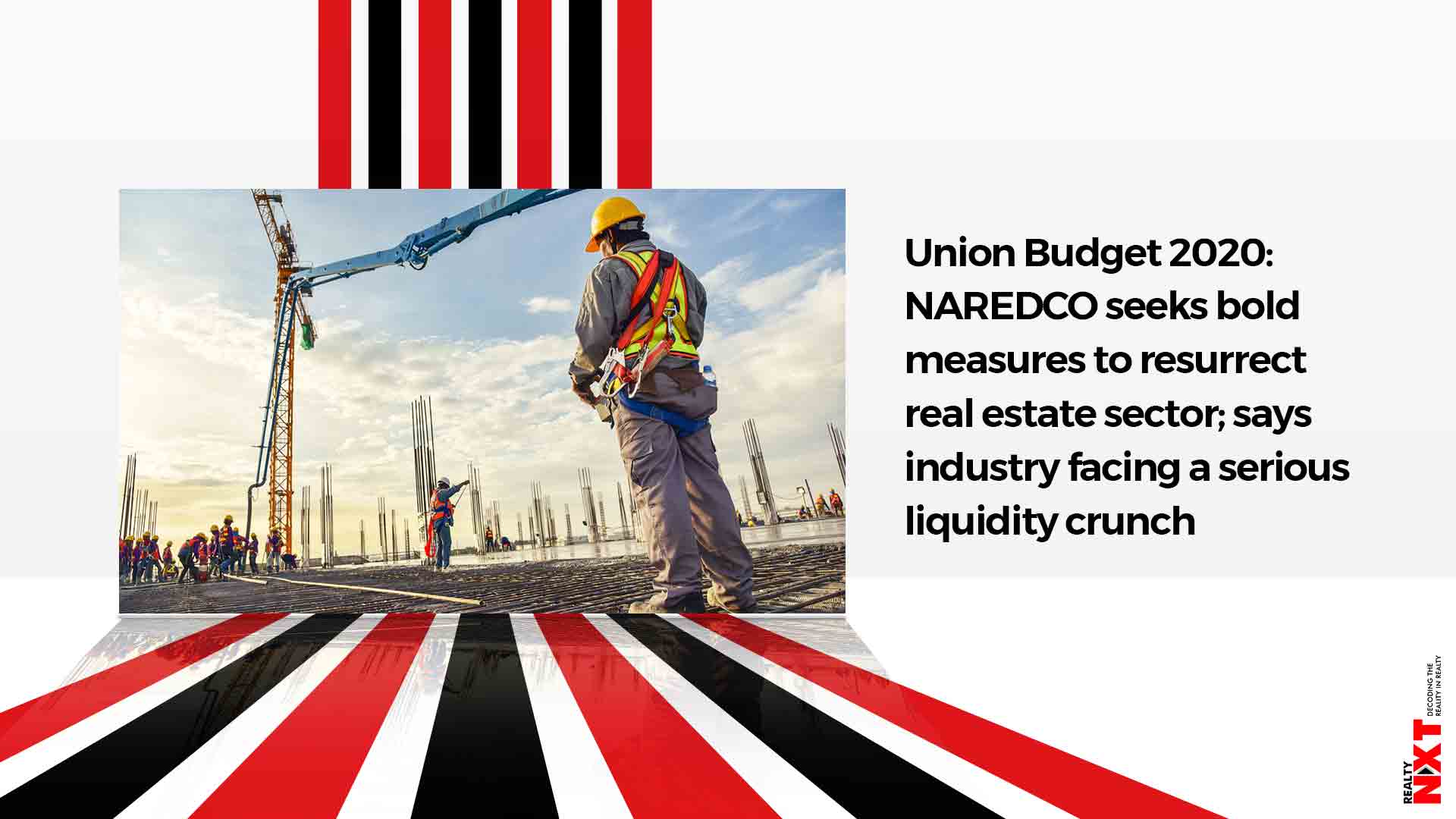 Realtors’ body NAREDCO on Wednesday urged the Centre to take some “bold fiscal measures” in the Union Budget 2020 to resurrect the real estate sector that is facing “serious challenges” including liquidity crunch.

NAREDCO national president Niranjan Hiranandani told the media here that the finance ministry has been apprised of the demands of the industry to meet the challenges.

“The Indian economy has in place the blueprint to evolve into the magic number of $5 trillion but the upcoming Budget has more pressing and urgent issues which cry out for attention and remedial action. Real estate and urban infrastructure plays a crucial role in boosting the economy which calls for an immediate support in terms of ease the liquidity crisis, boost rental housing and also rationalise personal and other forms of taxation,” he said.

On liquidity issue, he said the real estate industry is facing serious challenges and needs bold fiscal measures for resurrecting the reeling industry.

The industry has been demanding restructuring of loans or one-time rollover in case of the stressed assets at the options of banks. In such cases, the borrower will retain the asset classification of the restructured standard accounts as standard and the same will not be treated as non-performing assets (NPAs).

Interest rates on home loans shall be reduced to 7 percent per annum and the benefit of rate cut should transmit to end-users in order to revive the demand, Hiranandani said adding reduction in stamp duty by 50 percent for all real estate transactions registered on or before 31 March 2020 shall induce the fence sitters to turn into the actual home buyers spurring up the demand and consumption.

Reducing and rationalising taxation rates are an opportunity of creating disposable surplus in the hands of the citizen, and this will go a long way in pushing consumption; effectively enhancing turnover for industries across the economy.

Rental housing will play a vital role in achieving the target of Housing for All by 2022, he said suggesting incentivising rental housing system in India.

With rapid urbanisation and migration, there is a huge need of developing rental housing model to befit the need of the ever-increasing population in urban areas, he said.

He further said, “Recently, the definition of affordable housing has been amended in GST and income tax laws and as a result, the affordable tenement has to meet the dual condition of area and also the price cap of Rs 45 lakh.

“As a result almost all the houses in the MMR and most of the houses in NCR and other metros do not qualify as the affordable housing” resulting in the loss of benefit of reduced GST rate of 1 per cent and also the benefit of tax exemption from such projects. We recommend that the condition related to price cap of Rs 45 lakh be immediately abolished and the benefits be restored to all the houses which have area less than 60/90 sq metres,” Hiranandani said.

He also said there are provisions which create genuine hardships to real estate developers, who are already under pressure in the on-going sluggish market. Real estate industry is already struggling with large unsold inventories.

Taxing notional rent (Section 23(5) of the Income Tax Act), after one year from the end of the financial year in which completion certificate is received from the competent authority, will lead to severe financial implications for the developer/industry, he said.

It may also lead to no new projects being launched, if sales remain low, which in turn will defeat the mission of the Government to provide Housing for All by 2022, he added.

Growth of real estate and urban infrastructure is imperative to provide an impetus to India’s economic growth, Hiranandani said adding that fiscal stimulus to the real estate sector will have a manifold effect on 269 allied industries with multi-dimensional impact on enhancing the GDP growth inclusive of employment creation.

It will play a pivotal role in achieving an ambitious target of $5 trillion economy, the NAREDCO president said.

Referring to the upcoming Budget, he said, “Indian real estate sector expects a holistic solution rather than the piece-meal solutions that have been offered so far. The problem of liquidity is a complex one, what is needed is resolution with execution speed so, there is a need for acceleration, and NAREDCO hopes that the Finance Minister does the needful in the upcoming Budget proposals.”

The real estate sector expects support from the Budget to be able to play its role in GDP growth because it is not going through the best of times, he said adding that buyers’ interest has been erratic at best, sales have plummeted to historic lows. Hopefully, the Budget will offer fresh stimulus for real estate as the sector has had to deal with a series of disruptions, he said.