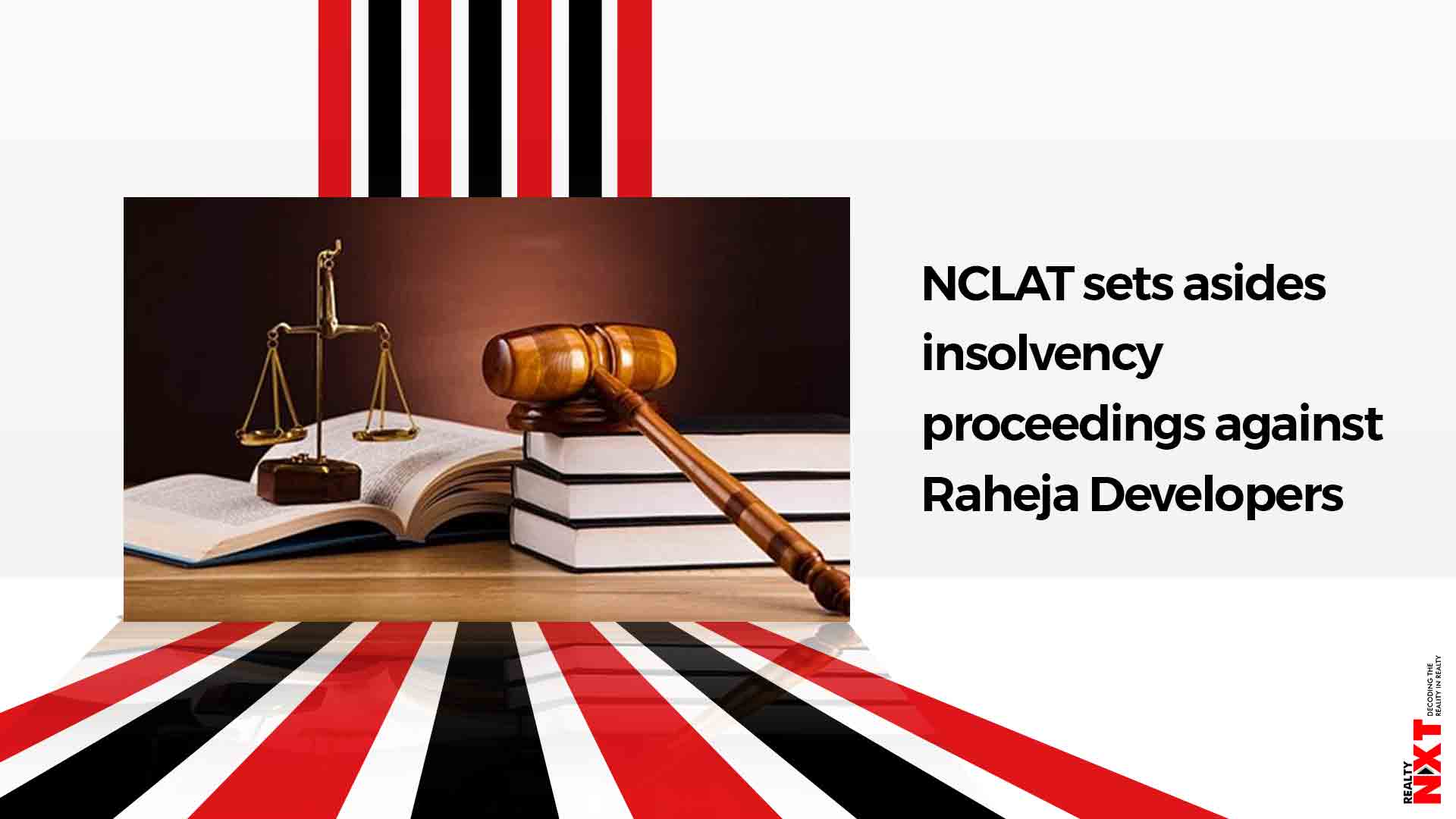 Providing major relief to Raheja Developers, the National Company Law Appellate Tribunal (NCLAT) has set aside the insolvency proceedings against the NCR-based real estate firm and handed over the management of the company back to its board of directors.

Earlier, on August 20 last year, the Delhi-based principal bench of the National Company Law Tribunal (NCLT) had directed to initiate insolvency proceedings against the company over the plea filed by one of its flat buyers citing delay in the project and appointed an interim resolution professional.

Setting aside it, a three-member NCLAT bench headed by Chairperson Justice S J Mukhopadhaya said that delay in the project was not because of the real estate firm but caused due to absence of clearance by the competent authorities, which was beyond its control and the NCLT “failed to appreciate the fact“.

“If the delay is not due to the ‘corporate debtor’ but force majeure, it cannot be alleged that the ‘Corporate Debtor’ (Raheja) defaulted in delivering the possession,” said the NCLAT.

The NCLAT also questioned the role of its flat buyers and observed that they moved the NCLT to initiate insolvency proceedings against the company “fraudulently with malicious intents“.

The NCLAT said that Raheja Developers had offered possession of flats to the buyers, but they wanted a refund of the amount with more interest and refused to take the actual amount in terms of flat buyer’s agreement.

“We have no other option but to set aside the impugned order dated August 20, 2019. The application preferred by 1st and 2nd respondents under Section 7 of the ‘I&B Code’ is dismissed,” said the NCLAT.

It further said: “The appellant ‘corporate debtor’ (Raheja Developers) is released from all the rigours of ‘moratorium’ and is allowed to function through its board of directors from immediate effect“.

The NCLAT also directed the interim resolution professional, appointed by the NCLT for the resolution of the company to hand over the assets and records to the board of directors.

Navin Raheja had also submitted a time-frame of completion of the project through an affidavit before the NCLAT on which it said: “We expect that the corporate debtor will stick to the time-frame given before this appellate tribunal.

The appellate tribunal also said that some intervention applications had been filed in this matter, but it is not taking it forward.

“It is to be noticed that there is intervention application filed by L&T Infrastructure Finance Co and L&T Finance and some other interveners, but we have not deliberated on their claim, as on merit we have allowed the appeal,” it said.

Flat buyers are now treated as the financial creditor of the company after recent amendments in the Insolvency & Bankruptcy Code (IBC).

The matter is related to a residential project, Raheja Sampada developed by Raheja Developers, in which the original petitioners had booked flats.

Raheja Developers had issued a joint allotment letter on August 3, 2012 and executed a flat buyer’s agreement. As per the agreement, possession was to be delivered within a period of 36 months, which was not fulfilled. The buyers had moved the NCLT claiming default.

According to the real estate firm, there was no default from its part as the handing of possession was subject to the provisioning of the infrastructure by the government in the area and it has received the occupation certificate in 2016.