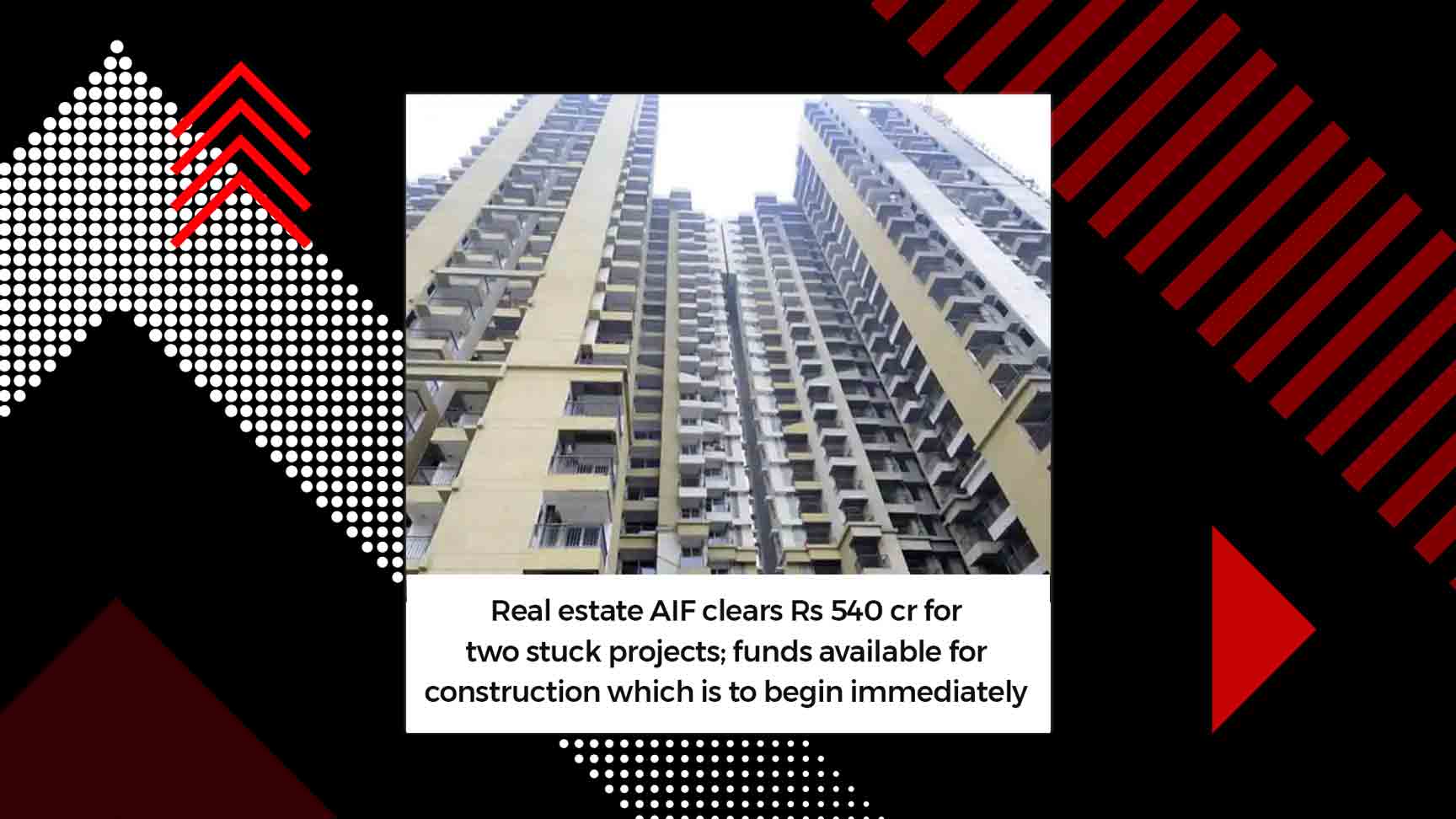 Construction for one of the projects is likely to begin immediately while in the other project, it may take the developer a month or so to start construction.

The Rs 25,000-crore alternative investment fund (AIF), set up to provide last-mile funding for stalled real estate projects by the government, has cleared Rs 540 crore for two housing projects in Mumbai and Bengaluru, a top official of SBI Capital.

Construction for one of the projects is likely to begin immediately while in the other project, it may take the developer a month or so to start construction.

None of the projects from Delhi-NCR have made it to the first disbursement of Rs 540 crore but there are six projects that are part of the transactions under active consideration.

“The two deals are expected to unlock capital of Rs 3,000 crore and provide relief to 1,800 homebuyers, benefiting over 8,500 people. While one of the projects will be in the construction phase almost immediately and will be completed in less than a year, in the other project, it may take a month or so to start construction and slightly longer to complete. The duration of construction is a function of the stage that the project is in. The fund ensures that the construction is not stalled and can progress at a fast pace by making sure that availability of capital is not a constraint,” Arun Mehta, MD, SBI Capital Markets and Chairman SBICAP Ventures.

While declining to name the developers, Mehta did say that one of the projects is by a first time developer and the other is by an experienced developer that has a stalled project. As for the stage of completion of these projects, one project is slightly past the half way stage while the other project is even more significantly advanced and is nearing completion.

Stating that the deployment of funds is “a function of speed of construction and the requirement of capital at every stage”, Mehta said that the fund expects to provide relief to around 50,000 housing units benefiting around 2.40 lakh people and unlock a capital of around Rs 26,000 crore of capital in the next one year.

Mehta declined to disclose the amount disbursed to the two projects.

“Market knowledge of such information may hinder that company’s ability to negotiate terms with its vendors/contractors,” he said.

The fund may also raise additional funds from domestic as well as international institutions over the next one year.

“Based on the first closing at a significantly large amount of Rs 10,500 crore, adequate capital is available for active deployment over the next one year. Additional capital will be raised by the fund from existing investors or from sovereign and multilateral international institutions in due course,” Mehta said.

The special window of Rs 25,000 crore set up by the government last year to provide relief to stuck real estate projects is in the form of the alternative investment fund (AIF). In the first stage, the Centre is infusing Rs 5,000 crore into the stress fund of Rs 12,500 crore  while the remaining is being pumped in by LIC, SBI, HDFC and nationalised banks. The AIF is being managed by SBI Cap Ventures Ltd.

On February 14, the finance ministry had tweeted that preliminary clearance has been given for due diligence to 14 projects with a capital commitment of Rs 2,500 crore. This will provide relief to 10,000 homebuyers and release Rs 12,500 crore of invested capital. Around 40 more deals are under active consideration for investment.

The fund has received maximum deals from NCR and MMR region as also from other five top cities. Deals have also come in from Dehradun, Bhiwadi, Goa, Nashik, Jaipur, Bhopal, Amritsar, Coimbatore, Vizag and Surat.

“Most of the deals received so far by the Fund are from NCR and MMR region. This is also in line with the market study which had pointed out that 41% of the stalled projects are in NCR while 21% are in MMR. Apart from the top 7 metropolitan cities, the Fund has also seen deal inflow from other regions of the country including places like Dehradun, Bhiwadi, Goa, Nashik, Jaipur, Bhopal, Amritsar, Coimbatore, Vizag and Surat,” he told Moneycontrol.

“All things being equal, the fund is prioritizing deals on the basis of number of homebuyers involved and where capital deployment from the Fund will have maximum impact. The fund is looking at transactions across the country,” he added.

Asked if it was easier to select projects from Mumbai and Bengaluru, Mehta said that the fund has not looked at the projects in terms of ease of dealing but in terms of impact on the number of homebuyers.

“Real estate is a local subject and there are different factors to be considered while analyzing projects in different geographies. The projects sanctioned or taken up for diligence also has to do with the flow of information from the developer or the lender,” he said.

Oversupply situation, project net worth status and land dues to authorities are the challenges that the fund has faced so far with regard to selecting projects in NCR that has the maximum number of stuck units across the country.

“Certain challenges that are seen to a varying extent in different NCR projects is the oversupply situation, project net worth status and the accumulated dues to the relevant authority for land allotment,” he said.

In UP, especially Noida and Greater Noida, the authorities have the first charge as there are still land dues running into crores.

“We are examining the position in terms of the investment policy. The Fund proposes to provide capital for the outstanding land dues as ascertained as part of the project cost. As regards charge, the charge to the Fund in such cases shall be subject to the authority’s charge. The fund conservatively assumes and provides for funding of the interest charges as per the land payment schedule. Any savings in these charges due to the zero period, if awarded, are a buffer for the completion of the project,” Mehta said.

As many as 60 stuck real estate projects have not met the criteria.

“Only about 60 projects, which is a small portion of the deals received, have not met the criteria for funding as they are green field projects or are not net worth positive or don’t have RERA registration,” he said.

He explained that the qualifying criteria is the initial eligibility screening basis for the fund. Once the deal meets the qualifying criteria, the fund Team undertakes a detailed investment evaluation that covers factors including investment analysis, legal issues and credit checks. This is then further evaluated by the Investment Committee prior to arriving at a decision to proceed with the investment.

The fund has also sought additional information from projects or developers who did not make it in the first round.”The fund team has ensured that there is adequate information is obtained at the application stage itself to take an informed call on the eligibility for funding before taking a decision. The additional information sought, if any, would be on those parameters where the deal seems to be falling short of the eligibility criteria,” Mehta said.