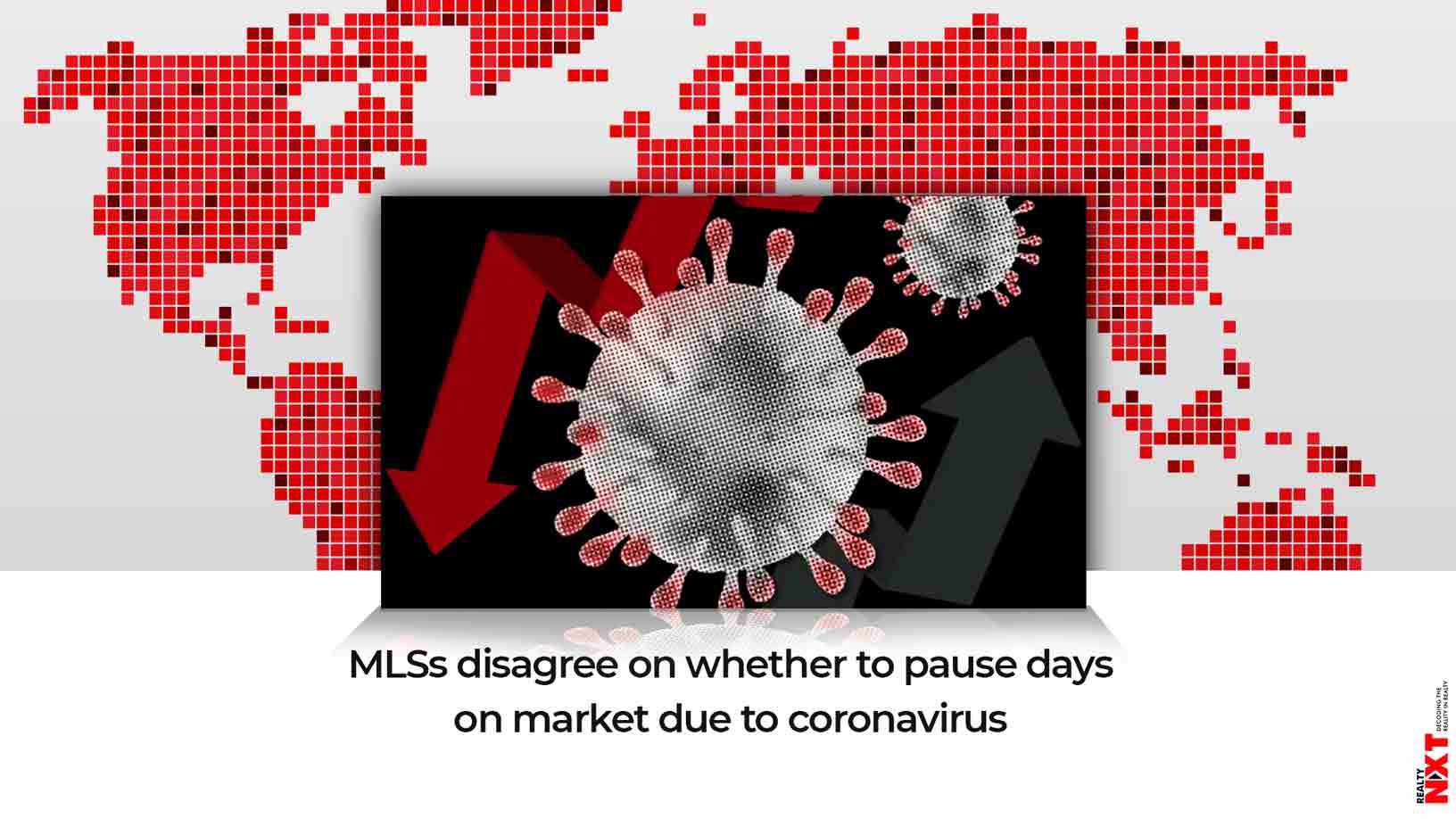 As multiple listing services grapple with how to best serve their agent and broker subscribers during the coronavirus outbreak, some are changing how they deal with a metric that can be a bugaboo of home sellers even during normal times: days on market.

When the figure is low, days on market can spur buyers to jump on a hot, new listing. When it’s high, it can make buyers wonder what’s wrong with the listing, regardless of whether there are external factors affecting the number.

Given that many states have issued shelter-in-place orders that prohibit real estate agents from even showing homes in person, MLSs are taking different tacks when it comes to letting days on market (DOM) accrue. Some are pausing DOM for listings in Active status. Others continue to count DOM for Active listings but are changing their rules regarding listings in Hold status, which do not accrue DOM.

In California, the California Association of Realtors is working to have real estate classified as an essential service, but in the meantime, agents and brokers are not exempt from the governor’s stay-at-home order and the trade group has said the state’s more than 200,000 Realtors “should cease doing all in-person marketing or sales activities, including showings, listing appointments, open houses and property inspections.”

Silicon Valley-based MLSListings, which has 15,500 subscribers, has decided to suspend DOM accrual for Active listings effective March 17 — a change the MLS is working to implement by this Friday and which the MLS does not expect to rescind until the governor’s order is lifted. Any DOM accrued before March 17 will remain with the property, MLSListings said on its website.

“This action is intended to relieve pressure on sellers and buyers during the coronavirus pandemic and to underscore public compliance efforts during the shelter-in-place. The health of the public is priority number one,” said Karl Lee, MLSListings’ chairman, in a statement.

Listings switched to Withdrawn status do not build up DOM. All Withdrawn listings after March 1 will be marked as New in the MLS’s Matrix platform only when returned to Active status, MLSListings said.

The MLS noted that its actions will not change whether public listing sites such as Redfin and Zillow continue to calculate “days on-site.” In New York, Zillow Group subsidiary StreetEasy has chosen to suspend its DOM display. The Real Estate Board of New York (REBNY) made a similar decision.

MLSListings has also disabled the broker tour and open house features on its platform until California’s shelter-in-place order is lifted, similar to other MLSs.

Meanwhile, California Regional MLS (CRMLS), the largest MLS in the country at more than 101,000 subscribers, has opted to continue letting DOM accrue for Active listings, but to change its policies regarding listings in a Hold status, which do not accrue DOM. CRMLS’s definition for Hold status encompasses listings for which a valid listing contract exists and no offer has been accepted but which the seller has instructed be listed as “Hold,” which means the listing cannot be shown or sent to third-party portals.

CRMLS has also lifted a restriction that previously only allowed a listing remains in Hold status for up to 30 days. Now, a Hold listing can be activated at any point in the future, CRMLS said on its website.

“We made these changes to make the process of managing their specific listings consistent with the needs of the individual seller easier on the CRMLS brokerage community,” CRMLS CEO Art Carter told.

“If the Seller, in these uncertain times, does not want any widespread public marketing of the property, then they can use Hold to remove the listing from the Active status,” he added.

On the other hand, CRMLS does not require that Active listings be made available for showings, so a seller that does not want showings but still wants widespread public marketing of a property does not have to use the Hold status, according to Carter.

Carter acknowledged that some agents have requested that CRMLS stop counting DOM on all listings for awhile.

“Such an action could create a number of unintended consequences, and some have suggested that misrepresenting the DOM could cause potential liability,” Carter said.

“Accurate information is a hallmark of a good MLS, and we trust that the brokerage community has the necessary skills and communication ability to use the DOM information to provide good counsel to their clients. Altering the DOM count would limit this opportunity for the brokers and appraisers to access this often-used piece of real estate information and would potentially limit the ability to track the affects of the pandemic on the real estate industry.”

In a blog post, MLS system vendor FBS, which offers the Flexmls platform, commended CRMLS for not pausing DOM for Active listings and encouraged other MLSs to do the same. CRMLS is one of FBS’s 158 MLS customers, which serve 254,539 members combined, FBS CEO Michael Wurzer MLSListings is not an FBS customer.

“The problem … is that pausing DOM distorts the accuracy of the data in the system. Years from now when the pandemic is hopefully a distant memory, we should be able to look back at the data and see the effect the pandemic had on days on market. If we see some markets where there’s no effect (because DOM was paused) and other markets where it wasn’t, that’s going to create a misleading picture,” FBS said in its blog post.

“Another reason not to pause DOM is that no competitive advantage or disadvantage is created for an agent, the pandemic is impacting everyone the same. Lastly, the way DOM works in Flexmls, pausing DOM is way more complicated than one might think, so not messing with it really helps us out, too, and creates less of a chance for problems.”

So far, a “half dozen or so have contacted us about it but none have yet made firm decisions,” he said.

Asked about concerns regarding data accuracy, MLSListings CEO Dave Wetzel told, “We are simply trying to take ‘fear’ (to some extent) out of the equation for potential sellers. While new listings are less than normal, we are still seeing new listings come on during this Shelter-in-Place. We didn’t want potential sellers making a decision based on the fear that a high DOM post shelter in place will hurt their ability to sell.

“In terms of ‘pausing DOM distorts the accuracy of the data in the MLS system,’ we haven’t changed the data for the listing. All the dates, original list date, etc. are all still intact.” While DOM will not continue to accrue, MLSListings subscribers and vendors with data feeds will be able to see original list dates, according to Wetzel.

He said MLSListings didn’t pause DOM to create a “competitive advantage” for any particular agent, since the change applies to all subscribers. “While every agent is in the same boat and may or may not be at an advantage with a DOM pause, MLSListings took this action to help potential sellers make decisions,” he said.

“We are in uncharted waters. There isn’t a textbook to pull out and review for the game plan to follow. Each MLS needs to listen to its members and respond to the needs of their market. We simply listened and responded. That involves software changes we have the ability to make on the fly as well as MLS rules we are able to temporarily relax,” he added.

MLSListings is not enforcing the requirement that all Active listings must be shown within three days of listing and is not imposing penalties for advertising a property for sale while it is in Withdrawn status, the MLS said on its website. It’s also suspending a rule that a photo must be uploaded to a new listing within one day after the last date.

MLSListings and CRMLS are both temporarily allowing agents to place links for unbranded virtual tours in the Public Remarks field of the MLS. For now, CRMLS is also allowing links to Virtual Open Houses and Virtual Showings, which can be branded or not, in the Public Remarks field. In the future, CRMLS plans to make Virtual Showings and Virtual Open Houses dedicated fields.

FBS is doing its part to help. On Wednesday, the firm launched three options for open houses to all its MLS customers on the desktop version of Flexmls:

Individual MLSs will choose which option to make available to their agents, according to Wurzer. “For example, if the MLS sets open houses to be Virtual Only (which most are right now), agents will not be allowed to enter an In-Person open house,” he said.

An agent can schedule a Virtual Open House for a specific date and time just like with an in-person open house, but the difference is that they’ll include a link to a service like Zoom, Skype, GoToMeeting, or Google Meet for the location of the open house, according to FBS.

“During the strict lock-downs in some states, agents can still hold Virtual Open Houses without even being at the property simply by holding Q&A sessions for those interested in the property and presenting the existing media they have such as photos, virtual tours, or videos,” the company said.

“The point of the Virtual Open House is to create that person-to-person engagement, even if you can’t be physically together or even at the property.”