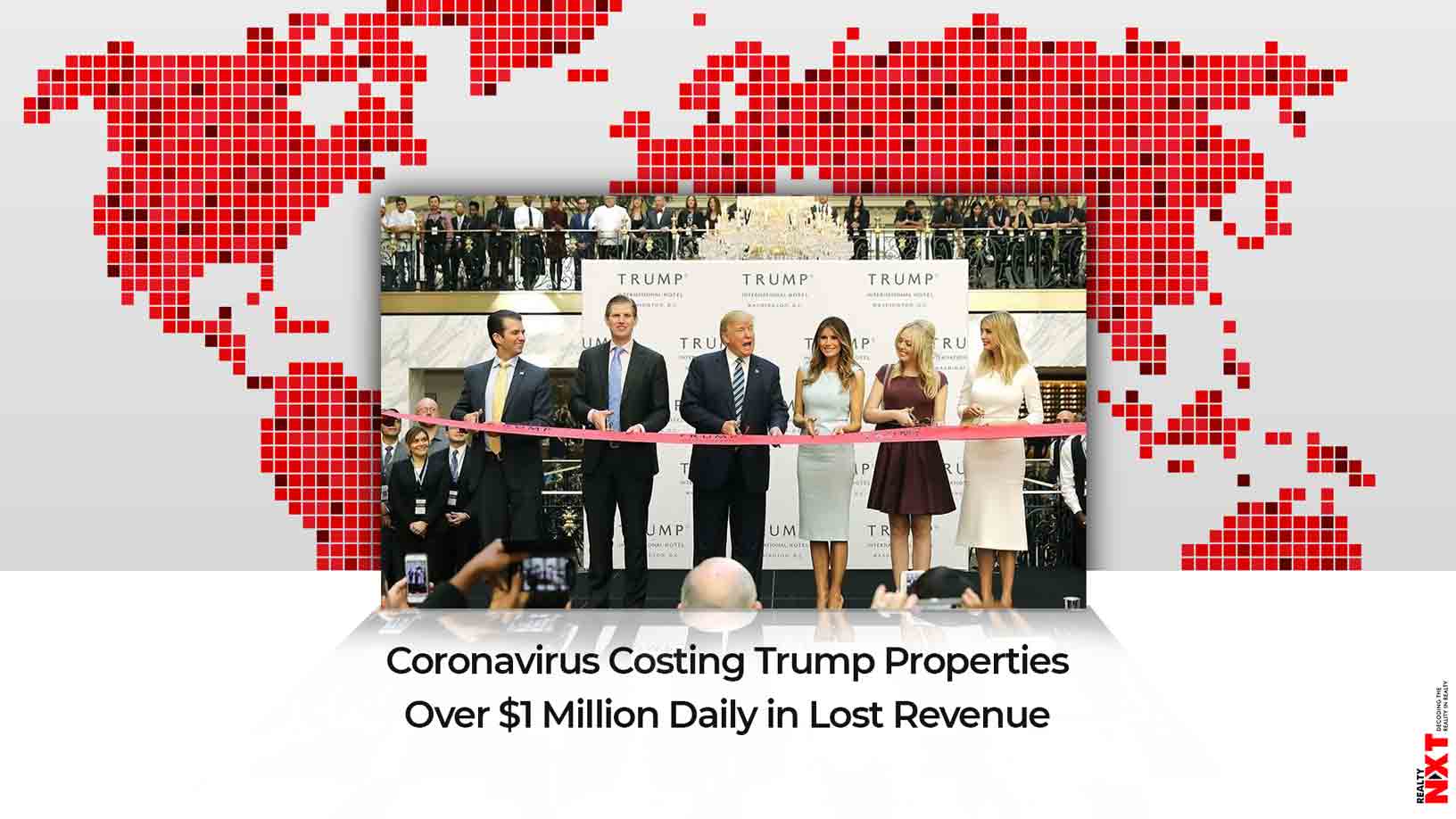 More than 500 staff at Trump properties in New York, Washington, Las Vegas and Florida have been laid off or furloughed, say people familiar with the matter and federal disclosures.

The coronavirus outbreak is costing Trump Organization properties more than a million dollars in lost revenue daily and may have hurt the firm’s chances of earning a record price on the sale of its Washington hotel, according to an analysis of industry data and people familiar with the deal talks.

The majority of revenues for President Trump’s family business comes from travel and leisure, which have been hit hard by the forced closures and economic downturn caused by the pandemic. The situation could worsen because golf accounts for about half of the roughly $440 million of income Mr. Trump reported in his latest government financial disclosure.

More than 500 staff at Trump properties in New York, Washington, Las Vegas and Florida have been laid off or furloughed, say people familiar with the matter and federal disclosures. Several Trump hotels have been closed, and those still running have experienced dwindling occupancies. One day in March, the family’s flagship Trump International Hotel in Washington had just 11 guests in its 263 rooms, according to an employee.

The outbreak also has derailed the organization’s effort to sell its long-term lease on the Washington hotel, which is in the former Old Post Office building. With extensions, the lease from the federal government runs close to 100 years. The organization was negotiating a deal with two potential buyers for between $320 million and $350 million, but those talks have stalled. At least one of the potential buyers was a consortium and both were hotel investors.

The family had hoped to raise as much as $500 million in a sale, according to people familiar with their thinking. But at $350 million, the deal still would have been the most-expensive hotel sale in Washington on a per room basis. People familiar with the sale process say a deal is unlikely until the impact of the pandemic becomes clearer.

“As we have done from day one, we are weighing all of our options,” Eric Trump, who runs the organization with his brother Donald Trump Jr., said in a statement. “Our main focus right now is to keep our amazing teams healthy and safe.”

The Trumps’ failure to close a deal could prove costly in other ways. The property, a short walk down Pennsylvania Avenue from the White House, is a hub of social activity among Republicans. If Mr. Trump isn’t re-elected this fall, much of that business could dry up quickly, and the Trump name on the hotel could keep other potential customers away.

Trump properties in Florida, including Mar-a-Lago and the Trump National Doral Miami, as well as in Las Vegas are closed.

“It’s like a ghost town here,” said Whitney Schneider, a Palm Beach, Fla., resident and member of Mar-a-Lago, which closed last week following an order from Florida Gov. Ron DeSantis for all bars and restaurants in the state to shut.

The Trump Organization isn’t alone among hotel and golf course operators confronting a crisis with little precedent. Mr. Trump’s businesses are explicitly barred from taking any part in the roughly $2 trillion rescue package signed into law in March.

“The impact to our industry is already more severe than anything we’ve seen before,” Chip Rogers, president of the American Hotel & Lodging Association, a trade group, told President Trump in a meeting at the White House last month.

The Journal’s estimates of Trump hotel revenues are based on federal disclosures, interviews with former and current employees and travel-industry data from analytics firm STR. The estimates use average occupancy rates and pricing data for the luxury hotel category by city for March 2019.

Recent total revenues of the Trump Organization couldn’t be determined, though even before the pandemic hit, the firm’s reported performance had been sluggish, federal disclosures show. Its prime office properties may help to partly temper the revenue declines from hotel and golf assets.

The Doral is likely losing more than $200,000 each day the resort is closed, according to the estimates. Besides golf, former employees of the resort said big profits come from golf tournaments, conventions and other events that attract hundreds of visitors who also book hotel rooms at the Doral.

Even the hotels that remain open, such as in Washington and New York, appear to be taking big losses, with those two properties together forgoing around $300,000 or more in revenues each day, according to the estimates.

“Like virtually every other hospitality company, we are anxiously awaiting the day when our world-class properties can fully reopen their doors,” Eric Trump said in a written response to questions, without commenting on the properties’ revenues. “We have an unbelievably strong company and we continue to pray for the health and safety of all Americans.”

There is seasonality in many of the organization’s businesses. The Florida properties were closed near peak season, while business would normally pick up in hotels and golf courses in the north as summer approaches. In New York and New Jersey—the epicenter of the pandemic in the U.S.—Trump golf courses reported annual revenues of around $45 million in the president’s latest financial disclosure.

As a result, some Trump-owned courses and their employees, through their participation in several industry groups, have supported efforts to lobby state and local officials to keep golf courses open during the pandemic or to win government relief if they are closed, lobbying disclosures show.

Jay Karen, chief executive of the National Golf Course Owners Association, a trade group, says golf courses should be allowed to stay open even with social-distancing guidelines in place, since players can remain 6 feet apart from one another and courses can limit the number of people playing at the same time.

Mr. Karen’s organization is part of an umbrella group called We Are Golf that lobbies federal, state and local officials. Trump courses in New Jersey and Pennsylvania are members of the group’s local chapters.

Another group representing managers of Trump courses is the Club Management Association of America. That group in turn is a member of the World Golf Foundation, the parent of We Are Golf.

Jeff Morgan, the CMAA president, said his members are hoping that facilities like golf courses will be eligible for federal assistance programs that excluded them in the past.

The pandemic is another setback to the Trump Organization’s thwarted ambitions to build a world-wide luxury hotel empire. Even before the coronavirus struck, the Trumps were forced to abandon plans to work with Middle Eastern, Asian and other foreign partners on luxury hotels because of conflict-of-interest concerns after Mr. Trump won the White House.

“We walked away from billions of dollars’ worth of deals and ceased virtually all expansion,” Eric Trump previously has said.

Some Trump hotel owners have removed the name and terminated the company’s management, including the 70-story Trump International Hotel & Tower in Panama City, which is shaped like a ship’s sail and is now a JW Marriott. A Trump hotel in Toronto went into receivership in 2016 and today operates as a St. Regis.

The Trumps’ effort to launch more lifestyle-oriented brands in the U.S. aimed at younger travelers and with a lower price point never went anywhere and has been shut down.