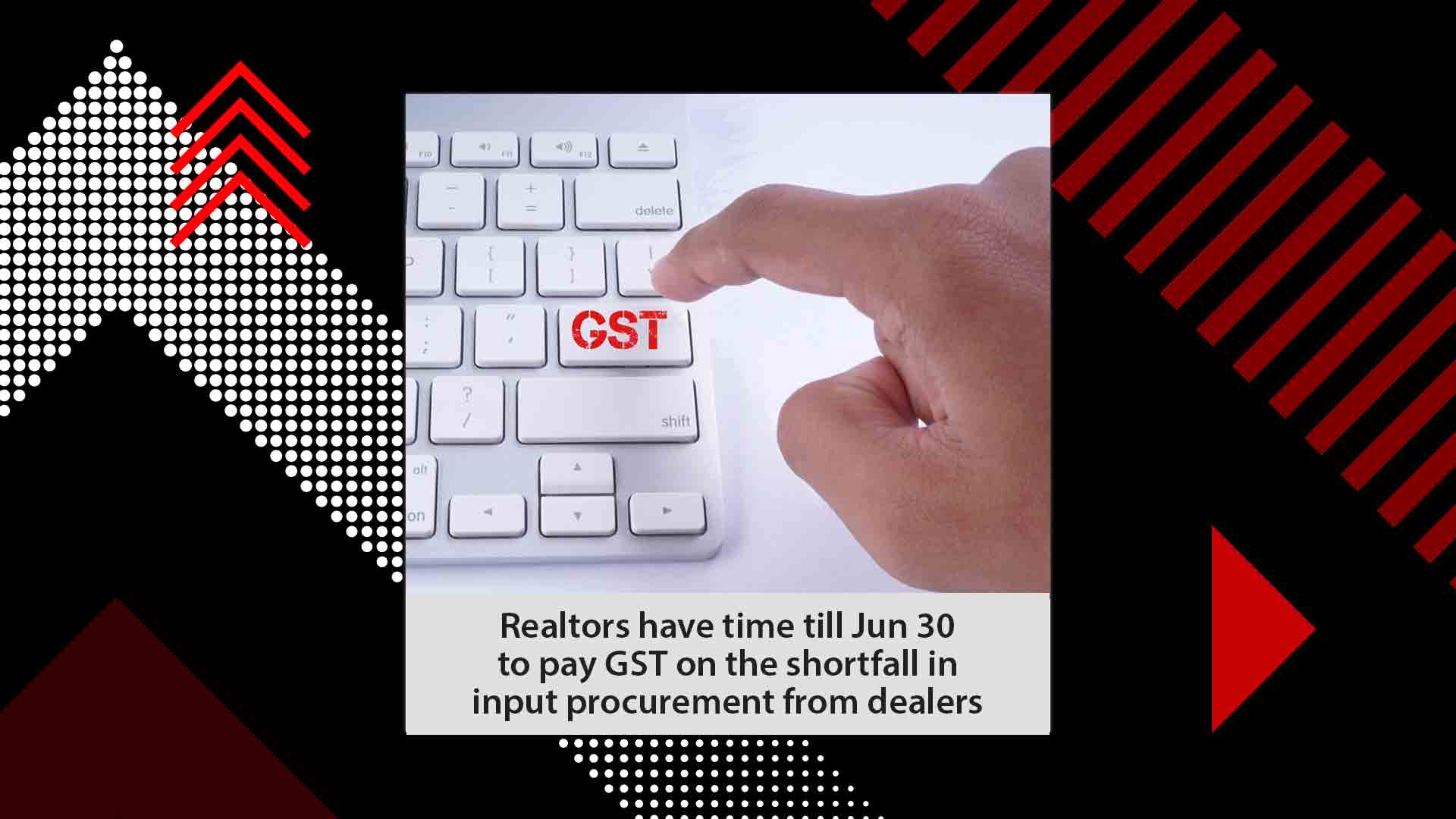 The GST Council had allowed real estate players to shift to 5 per cent GST rate for residential units and 1 per cent for affordable housing without the benefit of input tax credit (ITC) from April 1, 2019.

Real estate companies that opted for lower GST rates of 1 per cent and 5 per cent from April 1, 2019, but could not procure 80 per cent of the total supplies from registered dealers, will have to pay tax on the shortfall in such procurement by June 30.

The GST Council had allowed real estate players to shift to 5 per cent GST rate for residential units and 1 per cent for affordable housing without the benefit of input tax credit (ITC) from April 1, 2019.

However, they were mandated to procure at least 80 per cent of the inputs from registered dealers.

Any shortfall in the procurement would be subject to goods and services tax(GST) to be paid by real estate developers at the rate of 18 per cent on supplies used as inputs or input services and 28 per cent for cement.

In an instruction to Principal Chief Commissioners of Central Tax on June 24, the Department of Revenue said it has been decided that in case of shortfall from the said threshold of 80 per cent, the promoter/developer shall pay the tax on the value of input and input services comprising such shortfall and this tax shall be paid through a prescribed form electronically on the common portal by the end of the quarter following the financial year. Accordingly, for the financial year 2019-20, tax on such shortfall is to be paid by June 30, 2020.

The revenue department said it had received requests seeking details of prescribed form on which the said tax amount has to be reported.

“The issue referred by the trade has been examined. It has been decided that Form GST DRC-03, as already prescribed, shall be used for making the payment of such tax by promoter/developer.

“Accordingly, person required to pay tax in accordance with the said notification on the shortfall from threshold requirement of procuring input and input services (below 80 per cent) from registered person shall use the form DRC-03 to pay the tax electronically on the common portal within the prescribed period,” it said.

AMRG & Associates Senior Partner Rajat Mohan said real estate developers falling under the lower tax bracket of 1 and 5 per cent are fraught with massive tax demands for which payments need to be made in cash by June 30 without utilisation of input tax credit.

“Ailing real estate sector was expecting an extension (of due date for tax payment) on account of COVID-19 during these testing times, wherein project receipts have already dried up,” Mohan added.