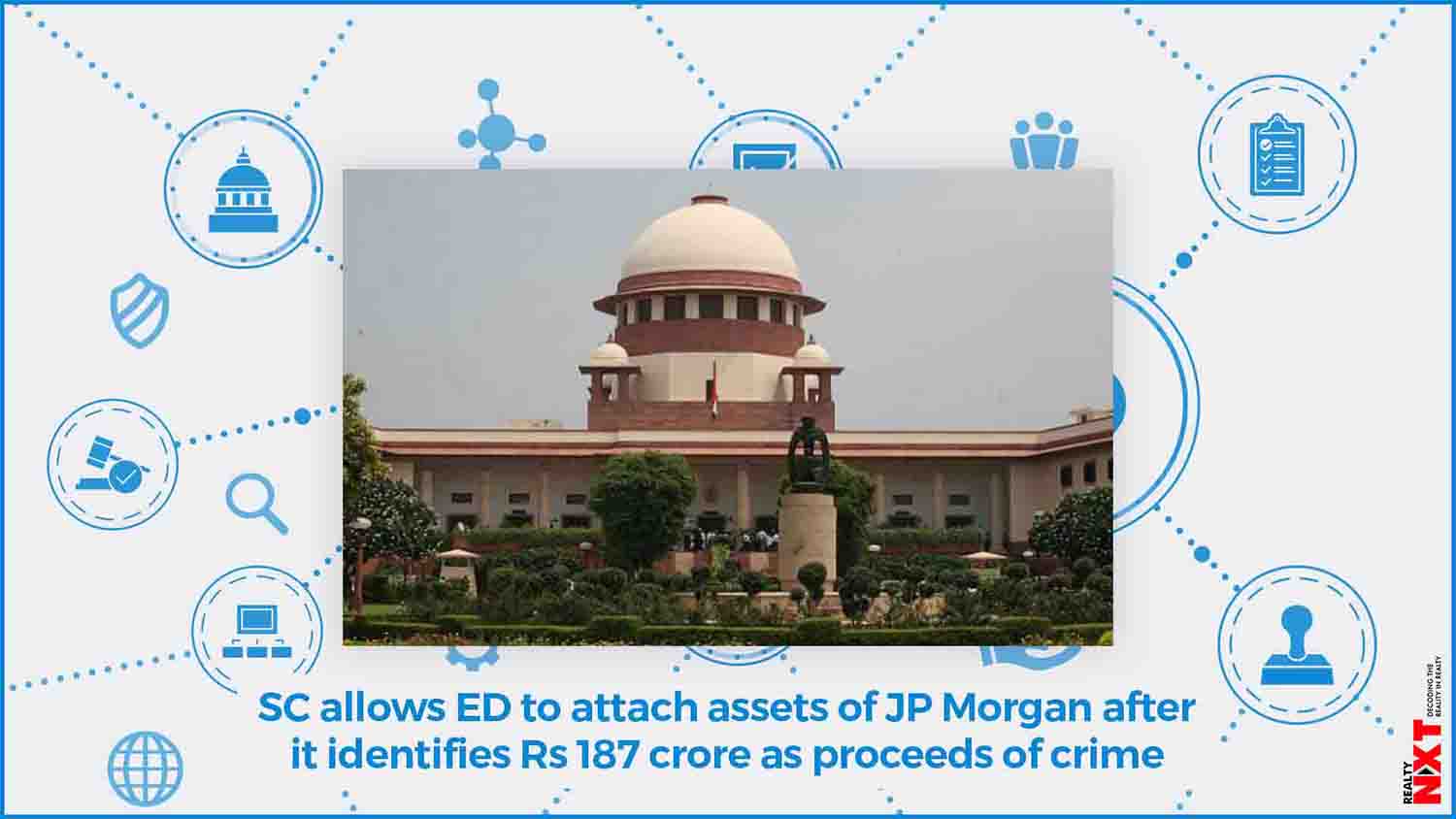 A bench of Justices Arun Mishra and U U Lalit, which took up the matter through video conferencing, granted permission to the ED to attach the properties of the multi-national firm, a senior lawyer associated with the case said.

The Supreme Court on Friday allowed Enforcement Directorate (ED) to attach properties of JP Morgan, which was engaged in transactions with the now-defunct Amrapali Group to allegedly siphon off homebuyers’ money in violation of the Foreign Exchange Management Act (FEMA) and FDI norms.

The ED told the top court that it has prima facie identified Rs 187 Crores in the accounts of JP Morgan, as proceeds of crime under the Prevention of Money Laundering Act (PMLA) and it needs permission to attach its properties to recover the same.

A bench of Justices Arun Mishra and U U Lalit, which took up the matter through video conferencing, granted the permission to the ED to attach the properties of the multi-national firm, a senior lawyer associated with the case said.

Additional Solicitor General Sanjay Jain, appearing for ED told the bench that the probe agency has so far prima facie identified Rs 187 crore in the accounts of JP Morgan, which according to them are proceeds of crime under the anti-money laundering law.

He said that the top court had on December 2, last year restrained the agency from attaching any properties and therefore now it needs permission to attach them, in order to move ahead as per law.

Meanwhile, the top court asked Additional Solicitor General Vikramjeet Banerjee to seek instructions on providing Rs 500 crore as loan to NBCC for completing the stalled projects of the embattled real estate firm Amrapali, as there is no private player involved in it.

Banerjee told the bench that a meeting is scheduled in finance ministry on the issue and he would inform the concerned authorities of the views expressed by the court.

He said that the suggestions given by court appointed receiver, senior advocate R Venkataramani, are being looked into by the State Bank of India for relaxing the guidelines for disbursing of loan.

The bench said that government has to take care of the funding as there are no private players involved in this and these stalled projects are stuck due to lack of funding.

It said that these unsold inventories also have money stuck and if they are completed and sold, they may fetch a considerable amount.

The bench said that funding through SBI Cap under government’s stress funding is concerned, a relaxed policy can be issued for Amrapali projects.

The top court said that it would take up the matter next week and asked Banerjee to seek instructions on possible funding of stalled projects.

On January 13, top court had orally asked the ED to attach Indian properties of JP Morgan after the probe agency said that it had prima facie found violations of FEMA norms by the US-based JP Morgan and that a complaint in this regard was lodged.

It had also allowed the ED to take into custody the defunct group’s CMD, Anil Kumar Sharma, and two other directors, Shiv Priya and Ajay Kumar, who are behind bars on the top court’s order, for interrogation as regards alleged money-laundering offences.

According to the share subscription agreement between JP Morgan and Amrapali Group, the US-based firm had invested Rs 85 crore on October 20, 2010 to have a preferential claim on profits in the ratio of 75 per cent to JP Morgan and 25 per cent to the promoters of Amrapali Homes Project Private Limited and Ultra Home.

Later, the same number of shares was bought back from JP Morgan for Rs 140 crore by two companies — M/s Neelkanth and M/s Rudraksha — owned by a peon and an office boy of Amrapali’s statutory auditor Anil Mittal.

On December 2 last year, the ED had informed the top court that it had prima facie found evidence of violation of FEMA by the multi-national firm and recorded the statements of the country head of the company with regard to dealings with the Amrapali Group.

The apex court had then directed the ED that the investigation should be carried out impartially, properly and expeditiously within a period of three months.

On July 23 last year, the top court had cracked its whip on errant builders for breaching the trust of home buyers, ordered cancellation of Amrapali Group’s registration under real estate law RERA and ousted it from its prime properties in the NCR by nixing the land leases.

It had ordered a probe by the ED into allegations of money laundering and to look into the charge of FEMA violation by JP Morgan.

“The money of the home buyers has been diverted. The directors diverted the money by the creation of dummy companies, realising professional fees, creating bogus bills, selling flats at an undervalued price, payment of excessive brokerage etc. They obtained investment from JP Morgan in violation of FEMA and FDI norms,” the top court had said.

It had said the equity shares of the group were purchased at an exorbitant price to suit the requirements of JP Morgan and the Amrapali Zodiac Developers Pvt Ltd had diverted home buyers’ funds.

“The shares were overvalued for making payments to JP Morgan. It was adopted as a device for siphoning off the money of the home buyers to foreign countries,” the top court had said as it accepted the reports of forensic auditors.

It had also noted that the shares of Amrapali Zodiac from JP Morgan have ultimately purchased for Rs 140 crore by M/s Neelkanth and M/s Rudraksha, shell companies owned by a peon and an office boy respectively.