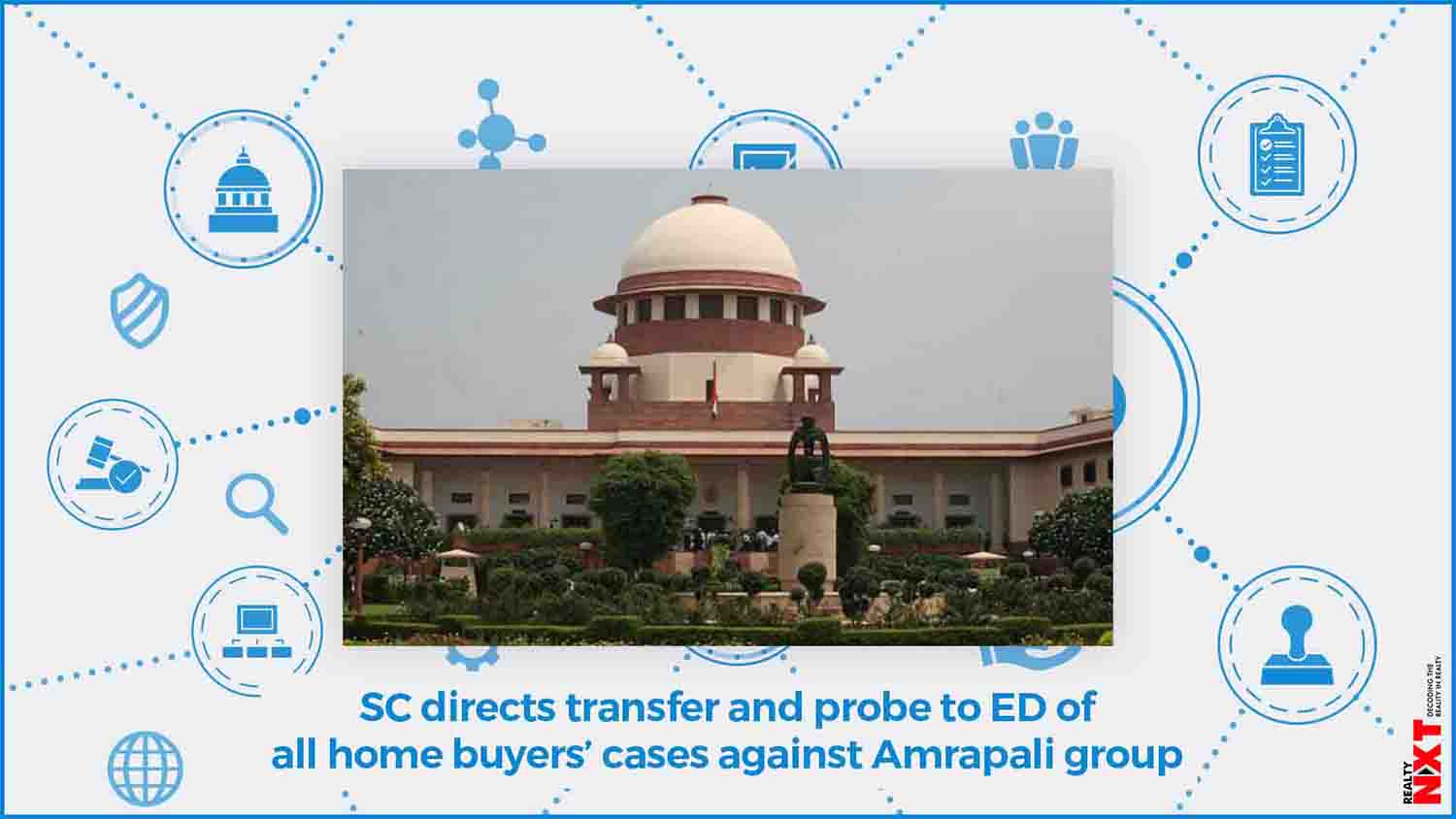 Several cases were lodged by homebuyers’ against the office bearers of Amrapali Group and the firm in Delhi-NCR after the management defaulted in the timely delivery of flats and denied the agreed conditions.

The Supreme Court on Friday directed transfer of all the cases lodged by homebuyers in Delhi-NCR against the Amrapali Group to Enforcement Directorate for further investigation.

A bench of Justice Arun Mishra and U U Lalit gave its direction on an application filed by Economic Offence Wing of Delhi police seeking clarification saying that various cases have been filed by home buyers against Amrapali group in different police stations of Uttar Pradesh and Delhi and whether they need to be clubbed together for investigation or are to probed separately.

Justice Lalit said that “let ED investigate all these cases.”

Several cases were lodged by homebuyers’ against the office bearers of Amrapali Group and the firm in Delhi-NCR after the management defaulted in the timely delivery of flats and denied the agreed conditions.

Additional Solicitor General Sanjay Jain, appearing for ED, informed the bench that Rs. 187 crores attached from multi-national firm JP Morgan has been deposited into the UCO bank escrow account in compliance of the top court’s order.

The top court also directed SBICAP Ventures, which manages the government sponsored stress fund for the real estate sector, to submit a final proposal by August 4 after it told the bench that it has identified eight stalled housing projects of Amrapali Group, which could be funded.

Senior advocate Harish Salve, appearing for SBICAP Ventures, told the bench that it has shortlisted eight stalled projects for funding but they need some time to finalise the plan and modalities.

He said they have held meetings with the court appointed receiver senior advocate R Venktaramani and they are trying to iron out various issues and therefore they need three weeks’ time to finalise the plan.

Counsel for home buyers M L Lahoty said that 12 per cent interest quoted by SBICAP Ventures is too exorbitant and it would be a heavy burden on home buyers and therefore it should be in accordance with RBI guidelines.

Salve and Venkataramani assured Lahoty that the rate of interest will be in accordance with the RBI guidelines.

Venkataramni told the bench that the banks are not responding well on the question of restructuring of loans of home buyers as directed by the top court.

The bench directed the CMDs of different bank to take the issue seriously and personally look into the matter of restructuring of loans of home buyers and also consider fresh application of loans.

It directed the Amrapali home buyers to pay their outstanding dues in terms of payment schedule prepared by NBCC, which is completing the stalled projects of embattled group.

Meanwhile, housing finance company DHFL informed the bench that they have worked out a plan with court receiver and is ready to disburse loans to 311 of 400 Amrapali flat Buyers. It said that company is yet to decide on 89 other cases by August first week.

The bench posted the matter for further hearing on August 4.

On June 18, the top court had directed multi-national firm JP Morgan, accused of allegedly diverting Amrapali Group home buyers’ money, to transfer Rs 187 crore plus interest from its bank accounts attached by the Enforcement Directorate to the escrow account maintained by the UCO bank.

The top court had on June 3 directed the multi-national firm JP Morgan to deposit Rs 140 crore plus interest, allegedly siphoned off in contravention to the norms as per the forensic auditors’ report and last year”s order in the case.

It had said that the money would be used for completing the pending projects of now defunct Amrapali Group and any claim of refunds by JP Morgan shall be subjected to final orders in the PMLA case registered against it.

It was told by the United Commercial Bank (UCO bank) that it has some difficulties in disbursing loans for construction of stalled projects by keeping the unsold inventory of 5221 units as mortgage.

The bench had asked UCO bank to work out the issues with the court receiver and whether it can be part of a consortium led by SBICAP Ventures, which manages the government sponsored stress fund for the real estate sector, and has agreed to fund the stalled projects through a Special Purpose Vehicle (SPV).

The UCO bank, which has shown its inclination to provide loan had earlier told the court through court receiver that it can provide fund to the tune of Rs 2000 crores while keeping the unsold inventory of 5221 units as mortgage.

On June 10, coming to the rescue of thousands of hassled home buyers of Amrapali, who saw loans being stalled by banks after the realty group ran into trouble, the top court had directed all financial institutions to disburse their balance funds and restructure the amounts.

It had said that since the projects of now- defunct Amrapali Group have been stalled for last several years, the home buyers who obtained loans from banks and financial institutions could not enjoy the fruits of their investment.

The top court had on July 23 last year, cracked its whip on errant builders for breaching the trust of homebuyers, ordered the cancellation of Amrapali Group”s registration under real estate law RERA, and ousted it from its prime properties in the NCR by nixing the land leases.