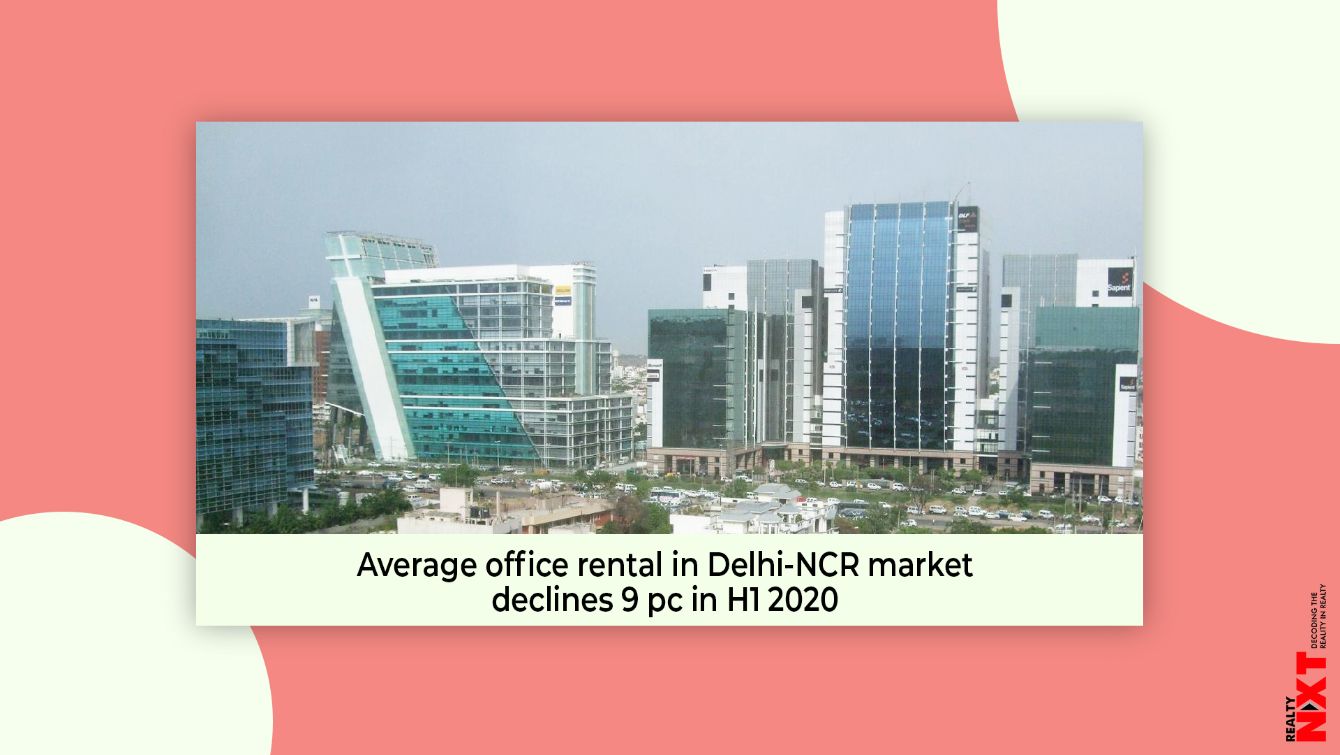 The new supply plunged 86 per cent to 8 lakh sq ft from 59 lakh sq ft during the period under review.

The average office rental in the Delhi-NCR market declined by 9 per cent to around Rs 78 per sq ft a month during the first half of this calendar year as demand was hit due to the COVID-19 pandemic, according to a report. In its half-yearly report, property consultant Knight Frank India has said that the gross absorption or leasing of office space fell 45 per cent to 21 lakh sq ft during January-June 2020 compared to 38 lakh sq ft in the year ago period.

The new supply plunged 86 per cent to 8 lakh sq ft from 59 lakh sq ft during the period under review. “As all business activities had paused during the lockdown, many organisations approached landlords for rent waivers and deferments in the second quarter of 2020. “Businesses are reworking their targets and outlook for the remainder of this CY/FY and want to save on real estate operating expenditure which constitute nearly 3-5 per cent of their operating income,” the report said.

The demand for office spaces from the co-working sector has also slowed down considerably in NCR, which was a major occupier segment until H2 2019. “As a result, rents have come under downward pressure as landlords fear exits from existing tenants. In H1 2020, weighted average rentals declined by 9% YoY to INR 844 per sq meter per month (INR 78.4 per sq ft per month),” the report said.

Going forward, the consultant said that rents might be further rationalised when leases come up for renewal. At the same time, demand contraction for office spaces in the short term would provide an opportunity for corporates to lock-in long term leases for expansion at cheap rents, in premium office buildings in otherwise expensive locations across NCR. “2019 was a landmark year for National Capital Region (NCR”s) office market as it witnessed huge supply infusion of 123 lakh sq ft, the highest in the past 8 years. Occupier demand, too, remained strong with total office space leasing of 86 lakh sq ft, the highest in a decade,” the report said.

The weighted average rentals recorded only 4 per cent annual growth in 2019. Knight Frank said that the market was poised for large scale occupier expansions to materialize in 2020, but the Covid-19 outbreak in March completely altered the scenario. “As the national lockdown was imposed in India from March 25th, 2020, limited gross leasing of 21 lakh sq ft was recorded in NCR in H1 2020 (Jan-June period) as decision making at corporate occupiers” end came to an abrupt halt,” the report said.

Planned real estate space take-ups have been put on hold as occupiers wait for the situation to evolve in the second half of the year before taking decisions regarding real estate occupancies for offices. In line with past trends, Knight Frank said that the two prime office markets in NCR, Noida and Gurugram, commanded the lion”s share of the total leasing pie with a 52 per cent and 44 per cent share respectively.

However, unlike the trend witnessed in the past seven years, more office space was leased in Noida than in Gurugram, mainly due to availability of new supply at lower rentals as compared to Gurugram”s key locations. The number of leasing deals in NCR came down from 81 in H1 2019 to 66 in H1 2020. The first half of the year saw its average transacted space decrease to 31,506 sq ft from 46,718 sq ft in the same period in 2019.

IT/ITeS and Banking, Financial Services and Insurance (BFSI) were the major demand driver. “Like many other businesses, Covid-19 has sent shockwaves to co-working business, which until last year was a major contributor to the overall leasing in NCR.

Co-working, which accounted for 12 per cent of the total leasing in NCR in H1 2019 saw its share diminished to 3 per cent in H1 2020. In terms of quantum, the space leased by coworking operators shrunk from 492,983 sq ft to 70,000 sq ft, registering an 85 per cent YoY decline. Vacancy rate might increase as many corporate occupiers have started serving notices to landlords to surrender offices spaces in NCR.