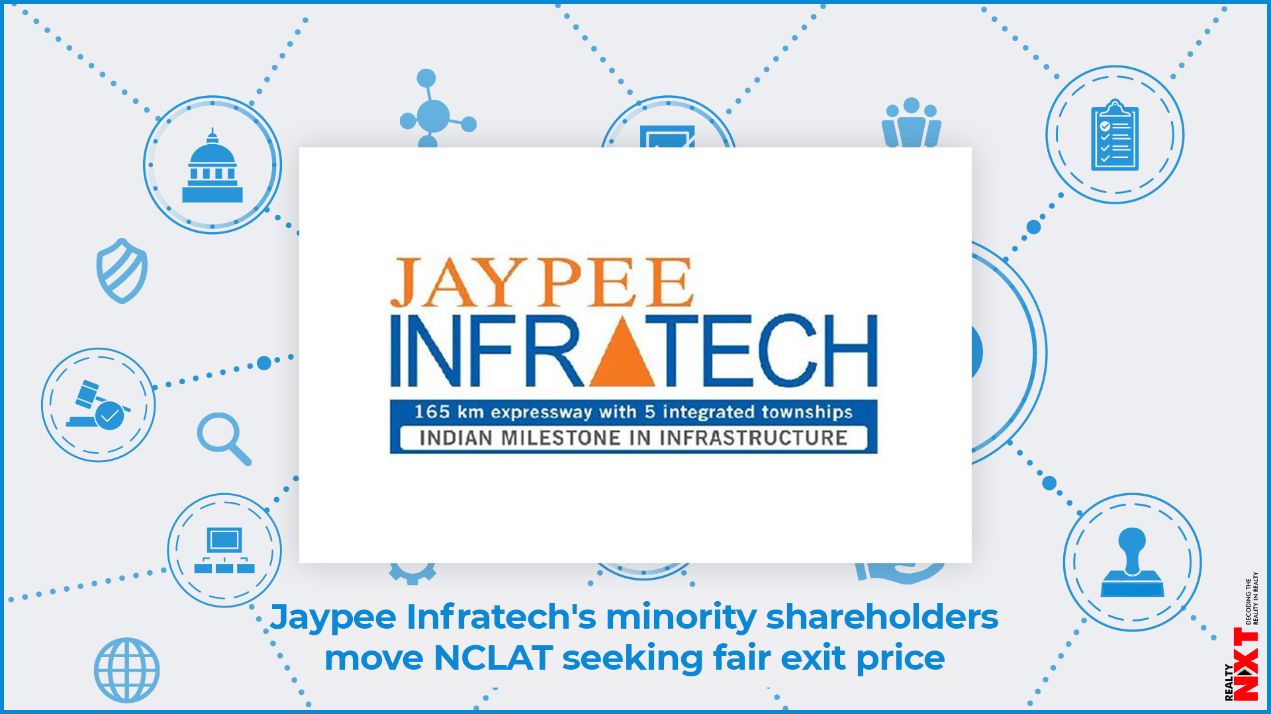 The shareholders have also requested the NCLAT to pass a direction to the stock exchanges BSE and NSE not to delist the share of Jaypee Infratech till they are adequately compensated.

A group of minority shareholders of Jaypee Infratech has moved the National Company Law Appellate Tribunal (NCLAT) seeking fair compensation in the delisting process of the debt-ridden firm.

The minority shareholders have asked for exit price at fair market value and have urged the appellate tribunal to either set aside or modify the order passed by the National Company Law Tribunal (NCLT) approving the resolution plan by state-owned NBCC on March 3, 2020.

The shareholders have also requested the NCLAT to pass a direction to the stock exchanges BSE and NSE not to delist the share of Jaypee Infratech till they are adequately compensated.

“The impugned order dated March 3, 2020 passed by the adjudicating authority (NCLT) be set aside/quashed or suitably modified to protect the interests of the appellants herein being the minority shareholders of the company,” said the petition filed through advocates Rohan Jaitely and Akshay Sharma.

They have also requested the NCLAT to give directions to the resolution professional of the company and NBCC to “consider giving a fair market value of the equity shares” held by them.

According to them, Jaypee Infratech has adequate assets to take care of the liabilities and interests of all stakeholders, but the interest of the minority shareholders was “neglected” in the approved resolution plan.

As per the Insolvency and Bankruptcy Code, they were not involved in the approval of the resolution plan. However, it “does not empower the respondents to completely ignore the interest of the minority shareholders”, the petition said.

The minority shareholders’ plea came up for hearing on Tuesday before a three-member NCLAT bench headed by the Acting Chairperson Justice B L Bhat.

The bench set August 17 as the next date of hearing.

The Delhi-based Principal bench of the NCLT had on March 3 had approved the NBCC plan to take over Jaypee Infratech and complete around 20,000 pending flats over the next three-and-a-half years. As per the plan, the debt-laden firm will be delisted.

The petition by 30 minority shareholders said that as per the resolution plan, the entire share capital of the Jaypee Infratech aggregating to Rs 1,388.99 crore would stand cancelled against a payment of Rs 1 crore and the complete ownership of the company would be transferred to NBCC by allotting all the shares for just Rs 120 crore.

“It is pertinent to mention here that the net worth of the corporate debtor (Jaypee Infratech) based on the fair value assed by the valuer appointed by the resolution professional itself is Rs 8,257 crore,” it said.

It further said “NCLT failed to appreciate that NBCC is attempting to acquire the corporate debtor having a net worth of Rs 8,257 crore for a paltry sum of Rs 120 crore.”

In the present case, both the company and the minority shareholders are at a great loss, they said.

According to them, as per a valuation done by IIFCL on March 31, 2017, Jaypee Infratech’s net realisable assets stood at Rs 20,277 crore and its net liabilities were Rs 9,900 crore. The amount required by the homebuyers is Rs 3,330 crore.

“As per the valuation done on March 31, 2017 out of the total paid-up equity share capital, there are approximately 139 crore shares out of which the minority shareholders are holding upto 25 crore shares and as per the above estimate and valuation, they should be given a minimum exit price of Rs 25-30 per share, which will not cost more than Rs 500-700 crore,” it said.

Jaypee Infratech went into insolvency proceedings in August 2017. In December last year, a committee of creditors (CoC) comprising 13 banks and around 21,000 homebuyers, approved the resolution plan of NBCC with 97.36 per cent votes in favour.

NBCC’s proposal was approved by the lenders in the third round of the bidding process to find a buyer for Jaypee Infratech. In its bid, NBCC had proposed to complete over 20,000 pending flats in housing projects launched by Jaypee Infratech in Noida and Greater Noida.