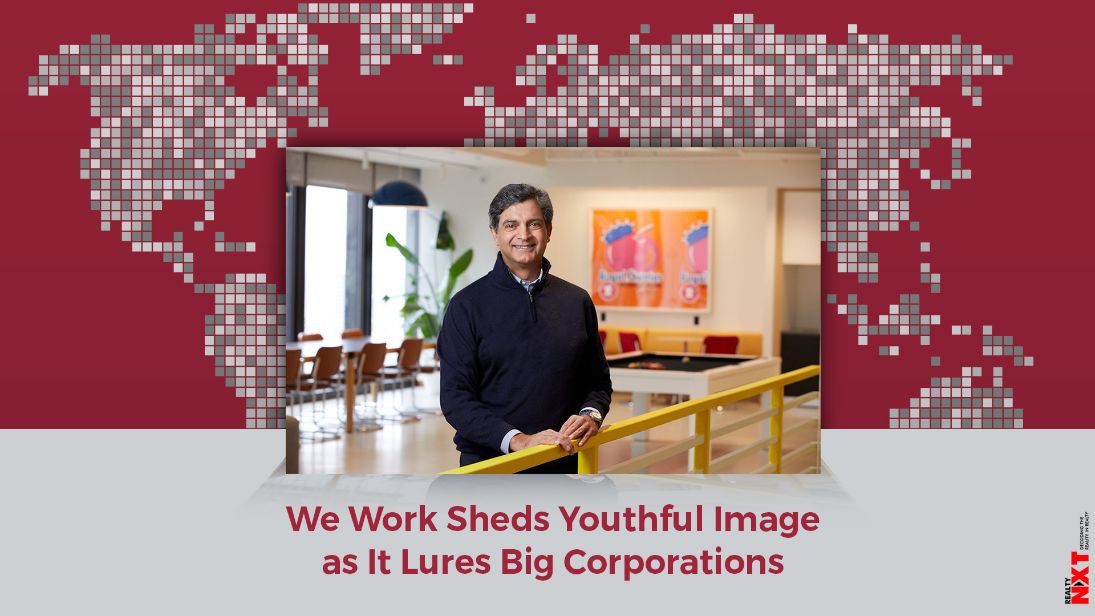 The second quarter marked the first time that companies with more than 500 employees made up more than half of WeWork’s core revenue, excluding its China and India operations, the company said.

WeWork enjoyed explosive early growth as a refuge for small startups and freelancers. Now, it is ditching that image while trying to revive its business with larger, more-traditional corporate clients.

With the new emphasis, WeWork hopes to weather a serious downturn in the office market triggered by the coronavirus. In June, large companies accounted for 65% of its new customers, said Sandeep Mathrani, chief executive of WeWork parent We Co. The second quarter marked the first time that companies with more than 500 employees made up more than half of WeWork’s core revenue, excluding its China and India operations, the company said.

That demand helped WeWork’s sales bounce back from a low in the spring. The company leased out almost as many desks in June as in February, said Mr. Mathrani, who became CEO early this year. WeWork and other co-working companies hope that economic uncertainty and the rise of flexible work schedules amid the pandemic will draw more big, established companies to its spaces.

“If you want to continue to grow faster, the additional demand comes from enterprise businesses,” Mr. Mathrani said an interview Friday, referring to the large-company business.

To some degree, WeWork may have had little choice but to shift its focus. Since the pandemic began, the co-working company has been losing many of the smaller tenants, particularly venture-funded startups, that made up a big share of its customers.

Kruze Consulting, which does accounting for venture-funded companies, saw about half of its customers with WeWork memberships get rid of their space between December and June, and another 26% reduce it, said Healy Jones, a Kruze vice president. Because WeWork memberships often have short terms, they are easier than traditional office leases for cash-strapped small firms to cut.

But WeWork’s growing focus on corporate customers also reflects the priorities and personality of its new CEO.

Is your company considering a satellite office or short-term lease in lieu of more-traditional office space?

Former chief Adam Neumann referred to the company as a “community” business tasked with bringing people together. Offices came with beer kegs, and customers could attend an annual “summer camp” with concerts and speakers like Deepak Chopra. That messaging appealed to lonely freelancers and small companies, but scared off some larger firms, which worried that their employees might divulge trade secrets or get recruited by rivals in shared offices.

Mr. Mathrani, a former real-estate executive at Vornado Realty Trust and CEO at shopping-mall operator General Growth Properties, now pitches companies on flexibility, or the ability to shrink or expand offices on short notice and without a long-term commitment.

One of WeWork’s corporate customers, access-management company Okta Inc., is giving more employees the option to work from home and plans to hire remote workers across the country, according to its senior vice president of global workplace services, Armen Vartanian.

Okta, which sped up its shift to remote work during the pandemic, plans to make desks in co-working spaces available to workers in cities where the San Francisco Bay Area company doesn’t have its own office.

Even with the new approach, the pandemic is weighing on WeWork. Many firms are cutting costs and are unwilling to commit to offices if they don’t know when they will be able to use them. At open locations, social distancing poses another problem: the company rents real estate by the square foot and sublets it by the desk, meaning less revenue if it has to use more space per desk.

WeWork, which has massive long-term lease obligations to landlords, continues to lose money despite mass layoffs over the past year. At the same time, the company said it managed to drastically improve its cash flow in the first quarter.

Okta’s Mr. Vartanian said the co-working industry could ultimately benefit from the rise of remote work, but for now many potential customers are worried about infections. “You’re going into a co-working location in close proximity with people that, you know, are complete strangers in a fairly dense environment indoors,” he said.

WeWork’s interest in corporate clients isn’t new. The company has for years courted large corporations and last year launched a private-office line for midsize firms. Between 2017 and the first quarter of 2020, the number of WeWork desks occupied by big companies increased 15-fold to 284,000, according to Mr. Mathrani, while desks for small and midsize companies increased fivefold to 366,000.