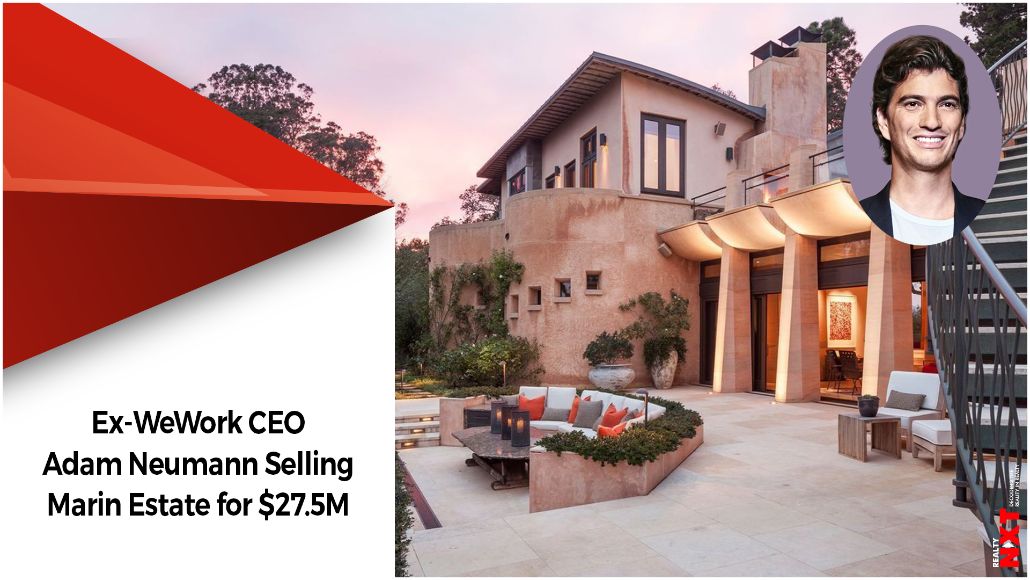 In 2019, Neumann, 41, stepped down as CEO of the co-working company, shortly before it canceled a planned public offering

The co-founder of WeWork, Adam Neumann, has listed his lavish Marin County estate for $27.5 million. The spread of 10-plus acres sits on a hilltop and offers an array of luxe amenities.

In 2019, Neumann, 41, stepped down as CEO of the co-working company, shortly before it canceled a planned public offering. Since then, he has also been paring down his luxury home portfolio.

The property comes with some rockin’ history. The “Guitar House,” as it’s been known, was the last place that the rock ‘n’ roll impresario Bill Graham lived. The concert promoter died in 1991.

Then, in 2003, the original home was largely demolished and rebuilt by the ecological designer and architect Sim Van der Ryn. The “reimagined” structure took five years to build, and offers an almost 10,000-square-foot main house, two-bedroom guest home, wine cellar, and staff quarters.

Set on a hilltop with views of San Francisco, and just minutes to the Golden Gate Bridge, the retreat offers complete privacy and deluxe amenities. The perks include a home theater that doubles as a music studio, a regulation racquetball court, parklike lawn, pool, spa, and commercial-grade waterslide, and an outdoor sport court.

A buyer can also choose to go off the grid, thanks to a well, solar and geothermal systems, a greenhouse, herb garden, chicken coop, and beekeeping area.

Post-pandemic, this will be a great party pad. The resortlike compound with spectacular views is also noted for “hosting large-scale events,” the listing states. The indoor-outdoor flow includes multiple patios, an outdoor fireplace, kitchen, and bar.

“In our new way of life, buyers are seeking optimal space dynamics, amenities, and a sense of inspiration,” says the listing agent, Joshua Deitch of Compass.

“This compound offers these highly sought after elements at the highest level.”

Inside, the layout of the main house includes four bedrooms, three full bathrooms, and four half-bathrooms. The space contains a great room with living, dining, and a gourmet chef’s kitchen with two butler pantries. Along with a family room, the floor plan includes an executive office, library-loft, and billiard-room.

In addition to the Northern California abode, the entrepreneur listed his three-level New York City penthouse in Gramercy Park for $37.5 million earlier this year. It’s still on the market. The 7,880-square-foot residence in a boutique building combines two upper-floor units, plus an additional lower-floor duplex reserved for guests or staff.

Since leaving WeWork, Neumann and his wife, WeWork co-founder Rebekah Neumann, have been unloading some of their posh properties.

In addition to listing the Gramercy Park real estate, the two apparently sold off a Hamptons retreat in an off-market transaction, according to Mansion Global.