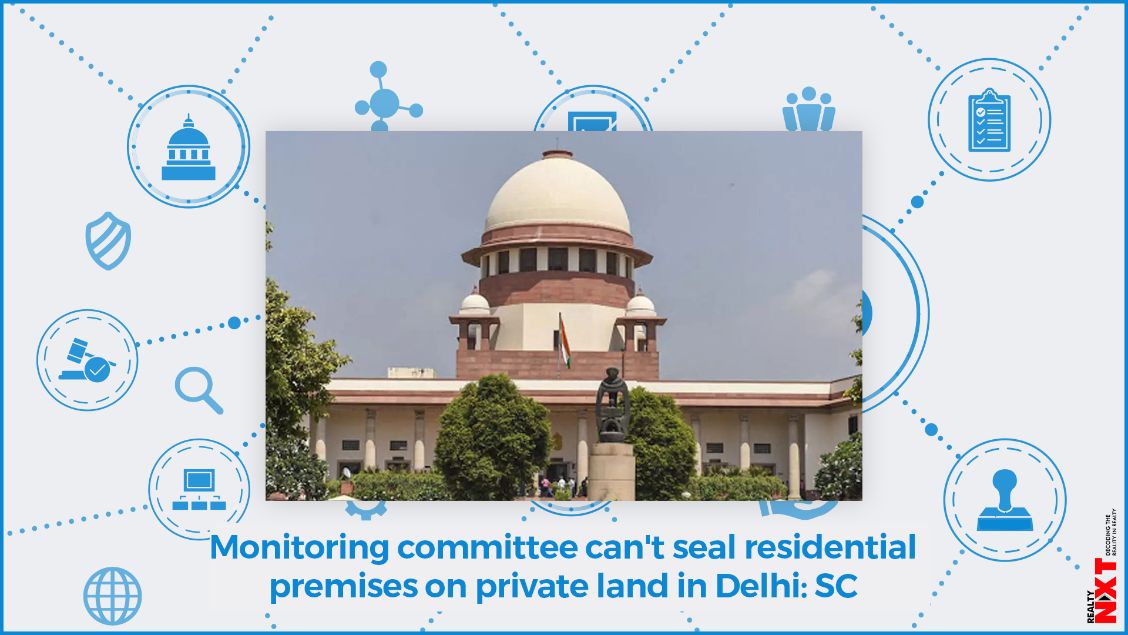 The top court said this in its verdict in which it dealt with the authority of monitoring committee to seal residential premises on private land, particularly when they are not being used for commercial purpose.

Encroachment is a matter of concern but the monitoring committee, set up in 2006 to identify unauthorised structures and check misuse of residential properties in Delhi, “cannot exceed its power” and take any action beyond its authorisation, the Supreme Court said on Friday.

The top court said this in its verdict in which it dealt with the authority of monitoring committee to seal residential premises on private land, particularly when they are not being used for commercial purpose.

It directed that the properties, sealed as per the committee’s April last year report, be de-sealed and possession be restored to the owners forthwith.

“Let this order be complied with within three days. However, we clarify that this order does not at all mean to belittle the yeomen service done by the monitoring committee for protection of Delhi,” it said.

The top court said it would not be appropriate for the committee to “usurp statutory powers” and act beyond the authority conferred upon it by the top court.

While referring to an April last year report submitted by the committee regarding specific unauthorised constructions allegedly carried out in Delhi’s Vasant Kunj and Rajokari areas, the bench said the panel could neither have sealed residential premises, which were not misused for commercial purpose, nor could have directed their demolition.

It noted that the monitoring committee was appointed and empowered by the court to take action within the powers conferred.

“In the teeth of various statutes, it would act strictly within the four corners of the powers conferred on it by this court,” the bench said, adding, “When we consider the various orders passed by this court from time to time, before the constitution of the monitoring committee, we find that this court at no point in time has empowered the monitoring committee to take action with respect to residential premises not used for commercial purpose”.

Referring to orders passed earlier by the court in the case, the bench said it is apparent that the monitoring committee was authorised to take care of unauthorised colonies and the special task force, which was set up in 2018, was directed to remove encroachments from public roads and public streets.

“It is apparent from the various orders passed by this court from time to time and from the various reports of the monitoring committee that it was never authorized by this court to take action against the residential premises that were not being used for commercial purposes. It was appointed only to check the misuser of the residential properties for commercial purposes,” the bench said.

It said that power of sealing of property carries civil consequences and a person can be deprived of property by following a procedure in accordance with the law.

It said that Article 300-A of the Constitution provides that nobody can be deprived of property and right of residence otherwise in the manner prescribed by law.

“The monitoring committee is not authorized to take action concerning the residential premises situated on the private land. If there is unauthorized construction or in case of deviation, the requisite provisions are under the DMC (Delhi Municipal Corporation) Act..,” the bench said.

“It would not be appropriate to the monitoring committee to usurp statutory powers and act beyond authority conferred upon it by the court,” it said.

The bench referred to an earlier order and said the court had directed the committee to give its considered opinion specifically as to whether at any point in time in the past, it had sealed any residential premises which were not misused for commercial purposes.

It noted that the committee kept silent on this aspect and did not cite even a single such instance.

“In the present matter, this court itself is monitoring the matter for a limited public purpose. It has not taken away the powers of statutory authorities under the Act concerning other matters except specified in the order,” it said.

The bench also appreciated the “selfless service” done by senior advocate Ranjit Kumar, who is assisting the apex court as an amicus curiae in the case for the last 24 years with “unflinching hard work and dedication along with his team of other amicus in the matter”.